‘Grunt’, Or, How I Learned To Stop Worrying And Love Maggots

A review of Mary Roach's latest, on everything about war that isn't about guns 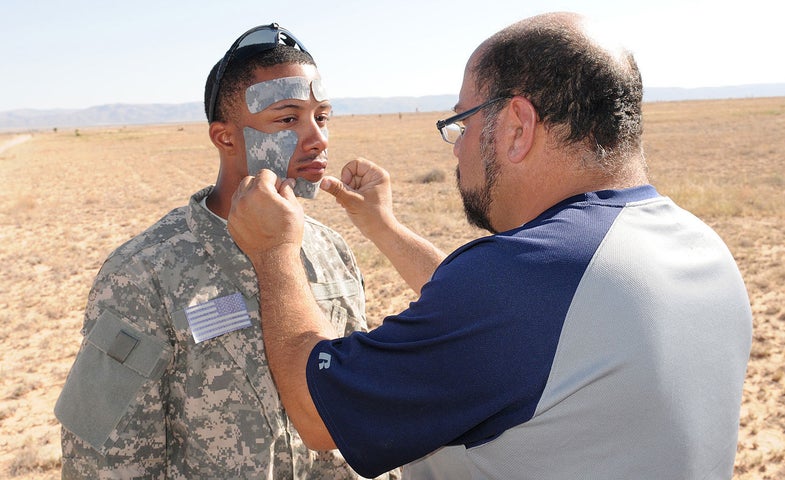 Most of war is about not dying. For every new development in ways to make people dead, there are other, elaborate ways to keep squishy vulnerable humans intact, in good health, and well rested enough to do their jobs. It is this second science, the science of staying alive in conditions built for death, that forms the whole of science journalist Mary Roach’s latest work, Grunt: the Curious Science of Humans at War. For everything other than the killing, it’s a masterful, digestible look a the science of war.

Grunt opens with a chapter on complex task of uniforms. Worn by everyone, they have a long list of competing functions. Roach writes:

To walk readers through this daunting task, Roach visits an Army thermal test facility in Natick. From there, we get an demonstration of thermal testing, and a run-down of all the trade-offs involved in making a uniform better at one trait. Some aspect of the uniform will always suck, because the materials best suited to one set of demands are disastrous for another, and it’s up to the researchers testing the uniforms, as well as the Pentagon officials ordering them, to balance those competing needs.

In telling the tale, Roach details history from nuclear tests and Spanish-American War fashion trends, as well as modern adaptations to unisex uniforms. The chapters are rich with information, but they never feel weighed down by their density. There is a flow to Roach’s work: from uniforms Grunt moves on to surviving bomb blasts in vehicles, then to the challenge of preserving hearing while listening for danger on a battlefield.

Grunt trends heavily medical: there are two chapters devoted to genital injury and recovery, a chapter on combat medics functioning in under stress, another on the wound-cleaning abilities of maggots, one on what a lack of sleep does to human functioning, and a chapter on the debilitating effects of diarrhea. A lack of sleep and frequent diarrhea are not what people typically think of when picturing war, but they’re frequent, unglamorous hazards that nonetheless inhibit how militaries fight wars.

Roach’s focus is wholly America, and largely terrestrial. A pair of chapters deal with hazards unique to the sea: sharks, a danger more imagined than deadly, and submarines, which have several claims to risk all their own. Apart from a brief discussion in the introduction, there is nothing specifically about the Air Force. The science is mostly about the science of bodies, and the interaction between those bodies, their clothes, and the stresses of the environment around them.

The sections on hearing and combat medics addressed stress under fire, but only the chapter on sleep deprivation really got at the cognitive strain of military readiness plus complex mechanical tasks. With autonomous machines becoming part of the military, the new burdens of tracking moving and likely armed robots in real time could easily fill another chapter, though perhaps the science isn’t there yet and won’t be for a decade or two.

If there is any weakness to Grunt, it is the abruptness of the end. Fittingly, Roach closes her book with a chapter on cadavers and autopsies. Collected and examined as part of the Armed Forces Medical Examiner System, the cadavers of America’s war dead are brought back for lessons learned, so that medics in the field and future researchers can learn, ultimately, what didn’t work.

And then Grunt ends, with the haunting volume of autopsied troops hanging like a specter over everything the reader’s just learned. Much of war is about not dying. Even death itself.

Grunt: the Curious Science of Humans at War is available now on Amazon and other major book retailers.