I Proposed With A Synthetic Diamond 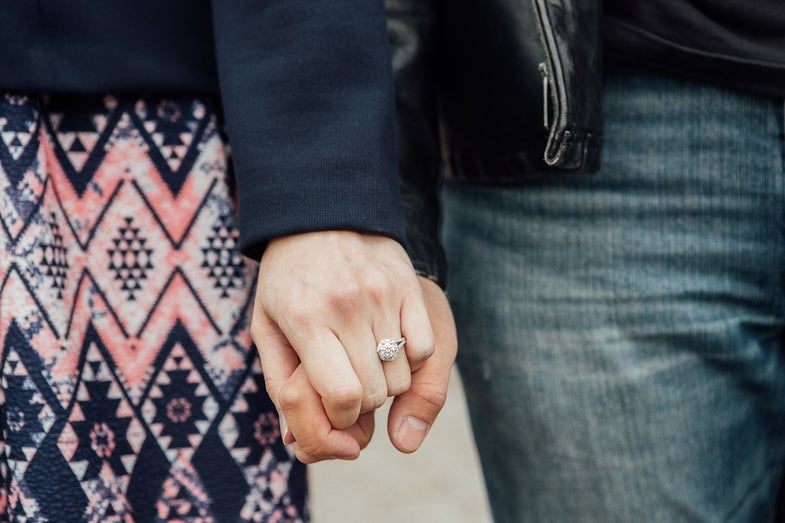 I proposed to Popular Science assistant editor Sarah Fecht last year, and I was lucky enough that she said yes! The experience of buying her engagement ring revealed to me just how high-tech jewelry has become in the past decade.

The diamond in her ring is a lab-grown jewel, and virtually identical to its natural counterparts. “Even a trained jeweler cannot tell them apart with the naked eye or jeweler’s loupe,” says jeweler Ariel Baruch at American Grown Diamonds, the New York company that I bought Sarah’s ring from. 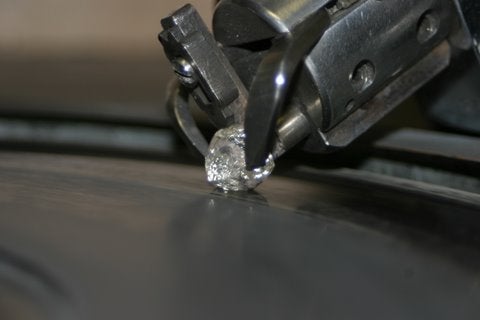 A lab-grown diamond gripped by a machine

The companies that make synthetic diamonds pitch them as an ethical, conflict-free, and frequently cheaper alternative to diamonds produced the old-fashioned way—letting the Earth’s mantle provide the pressure and temperature over time, and mining the results. But some jewelry experts have pushed back against these points, arguing ethical diamond mining can boost local economies and that synthetic diamonds are not that much cheaper. Regardless, the production of synthetic diamonds is a major scientific feat that’s only become available in the past 60-some years.

Instead, commercially available gem-quality synthetic diamonds are nowadays typically made using a process known as chemical vapor deposition (CVD). This method differs greatly from natural diamond formation, with diamond growing from a heated mix of hydrogen and a hydrocarbon gas, such as methane, at very low pressures inside a vacuum chamber.

The first diamonds produced using CVD were very tiny, says Wuyi Wang, director of research and development at the Gemological Institute of America. But by the 1980s, scientists figured out a way to use CVD to manufacture diamond films, and in the 1990s, researchers finally discovered a method to use CVD to create gem-size and gem-quality diamonds.

One key behind this advance with CVD “was using a diamond crystal as a seed for diamond to grow on top of,” Wang says. “Previously, silicon was used to seed diamond crystallization with CVD. Silicon has larger atoms than carbon, and so this mismatch could introduce problems into diamond formation.”

Another factor in this breakthrough was the discovery of the optimal gas mixtures and temperatures for gem-quality diamond growth, Wang adds.

The CVD process can now grow diamonds up to about 4 carats in size with very good clarity, Wang says. The market for CVD diamonds is also growing rapidly. Wang says that Gemesis, currently the world’s leading supplier of gem-quality synthetic diamonds, aimed to manufacture 350,000 carats in 2014 and 400,000 in 2015. “If diamonds are grown about 30 microns per hour, you’d need 100 hours for 1 carat, but you could maybe grow 50 or 100 stones in one run,” Wang says.

However, CVD diamonds could soon be old news. New developments in HPHT in the past five years or so have led to diamonds that are both cheaper and better in quality than ones manufactured using CVD, Wang says. “The largest crystal this has produced so far was more than 30 carats rough, polished to 10.02 carats — the largest synthetic diamond in the world right now,” Wang says. “I’ve heard rumors of a diamond 60 carats rough in size, and of groups targeting 100 carats rough. This is going to change the diamond market.”

Not only are diamonds in engagement rings sometimes high-tech, but so are their settings. Sarah’s ring was first created as a 3D model using computer-aided design (CAD) software, as is much other jewelry nowadays.

Using 3D-modeling programs, jewelers can easily tinker with the size, color and shape of rings and gems to see how they might look. The software can even model the refractive index of gems to calculate how light bounces around inside a gem, “so you can see how a blue diamond compares to a blue sapphire,” says Mike Magee, senior manager of global jewelry manufacturing arts at the Gemological Institute of America.

In the world of jewelry, “early adopters got into CAD in the mid-’90s, but it didn’t really take off in the industry until the mid-2000s,” Magee says. “Now there is jewelry-specific CAD software that is quite sophisticated, and all the major names in the jewelry industry have adopted CAD to one extent or another.”

Major jewelry companies are not the only businesses adopting 3D computer modeling — mom-and-pop stores are, too, Magee says. “It’s made custom personalized designs available on demand,” Magee says. “That feeling that a piece of jewelry is made just for you can make you feel like a rock star.”

“Before CAD, each design would have to be handcrafted in wax, and any major change was almost impossible to do without compromising the design,” Baruch says. “Once you learn how to work with CAD, it is very simple. It’s a beautiful tool to have while sitting with a customer, because you can create that special moment right in front of them.” 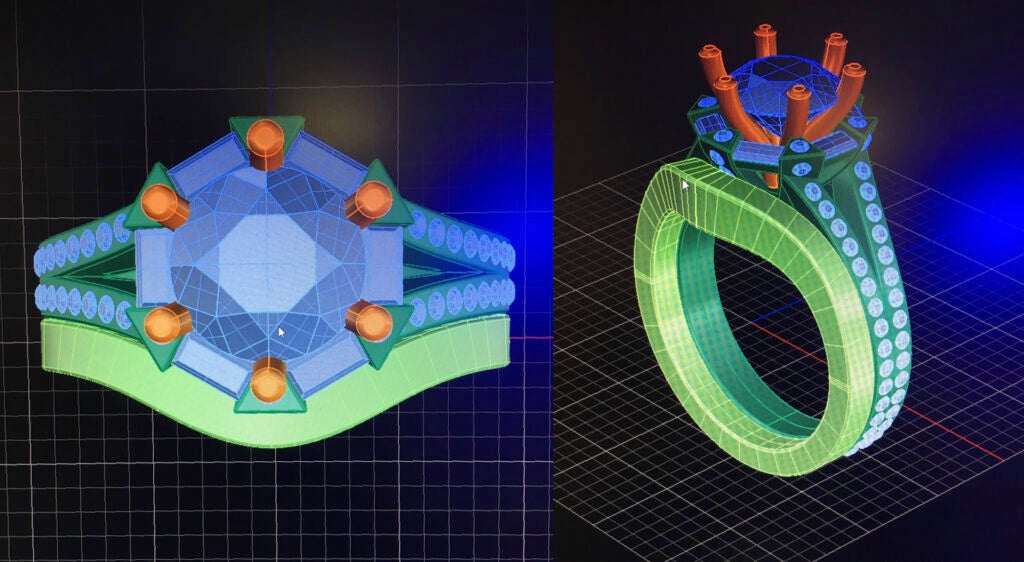 3D modeling software allows those in the market for new jewelry to select the details of their rings on a computer, view them, and alter them before creation. It’s also increasingly used to 3D-print custom jewelry on demand.

Not only is 3D modeling now prevalent in jewelry, but 3D printing is becoming more common as well. I held a 3D-printed resin copy of Sarah’s ring before the jeweler made the final metal version.

“We see 3D-printing for prototype approval — for clients to see beforehand — but more and more, we see it used for direct manufacturing,” Magee says. Jewelers are increasingly 3D-printing the molds that molten metal is poured into to create rings.

Eventually lasers could sinter metal powder to produce many rings. “Direct metal laser sintering is not widespread at all yet in the industry — only a couple of companies are doing it,” Magee says. “The costs of that are pretty high, not just for the machine itself, but for the gold dust you’d need.”

Still, people are still a key to many parts of ring-making, from cutting, polishing, grading and setting the diamond to designing the ring. The jewelers that made Sarah’s ring added engraving by hand to help give it the classic touch she loves. “The human touch is extremely important,” Baruch says.