This Is The Vehicle That Will Replace The Humvee

Now all it needs is a catchier nickname than 'LATV' 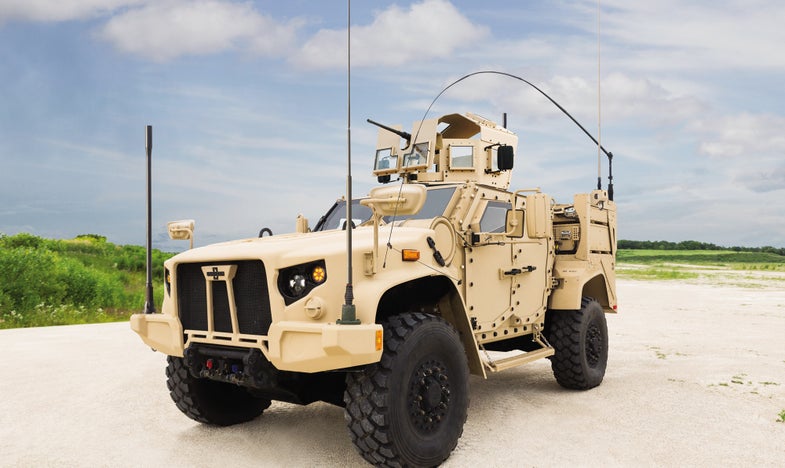 This side of a tank, there is no more iconic U.S. Army vehicle that the High Mobility Multipurpose Wheeled Vehicle (HMMVV), or as it’s better known, the Humvee. Design on them started in the late 1970s, with the Jeep-like vehicles first delivered in the mid-1980s. Humvees invaded Iraq twice, carrying soldiers and marines rapidly over desert. A wide range of equipment configurations made the HMMVV at times a troop carrier, an ambulance, and anti-tank tool, and an artillery pack mule. As useful as the vehicle was fighting against Saddam Hussein’s Iraqi military during the Iraq War, it suffered on counterinsurgency patrols, as its light weight left it vulnerable to powerful roadside bombs. Yesterday, the Army announced the contract for the Joint Light Tactical Vehicle program: Oshkosh’s Light Combat Tactical All-Terrain Vehicle, or L-ATV.

If it looks like a bigger, buffer descendent of the vehicle that it’s replacing, that’s fully intentional. When the Pentagon needed a way to cart troops around through dangerous terrain, it first turned to Humvees carrying more armor. This slowed down the vehicles, which were designed to be light weight, and didn’t offer as much protection as needed. Next, the military looked to MRAPs, a kind of heavy truck made for surviving bomb blasts. The L-ATV borrows design elements from MRAPs, but with the promise of more speed, and therefore more mobility, than the heavier armored trucks. The original Humvee, like the jeeps it replaced, was designed as an off-road vehicle, and the L-ATV should be able to travel freely across terrain too.

The L-ATV is almost three times the weight of the original Humvee design. That’s a major concern for the Marines, who will field the L-ATVs from ships initially designed to carry their lighter predecessors. In the initial contract, Oshkosh will build 17,000 of the L-ATV over the next few years, with 5,500 of those going to the Marine Corps. The total production run of the vehicle is set to be much larger, with the Army looking to replace over 49,000 vehicles currently in service.

Watch it drive around some terrain below: