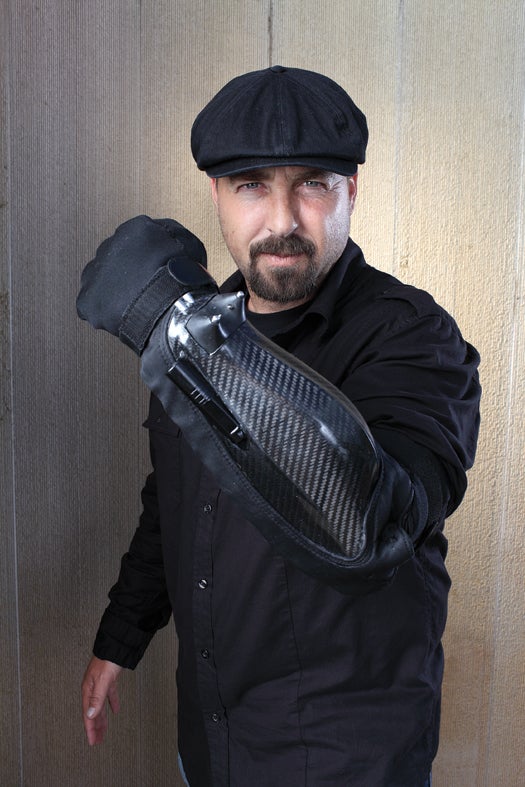 A robber is cornered in a dead-end alley. He turns to face the police officer pursuing him, ready to fight. He pauses. The officer’s left forearm is encased in ballistic nylon, and half a million volts arc menacingly between electrodes on his wrist. A green laser target lands on the robber’s chest. He puts his hands up; it’s a fight he can’t win.

For police and corrections officers, preventing and defusing confrontations can save lives, and that’s the premise behind the BodyGuard.

Equipped with a highvoltage stunner, video camera, laser pointer and flashlight, the armor sleeve is intended to prevent violent situations. The invention was designed by David Brown, a cameraman, editor and producer who makes a living filming musical acts such as Rage Against the Machine and Snoop Dogg, as well as behindthe-scenes movie footage for the actor Kevin Costner, a friend and BodyGuard investor.

Brown developed the concept for the device one evening in 2004, when he and some friends were discussing a recent mountain lion attack in a nearby Orange County park that had left one cyclist dead and another maimed. During an attack like that, Brown recalls thinking, even if you have a knife or other handheld weapon, you’re going to drop it. He wanted something that a person could deploy instinctually. 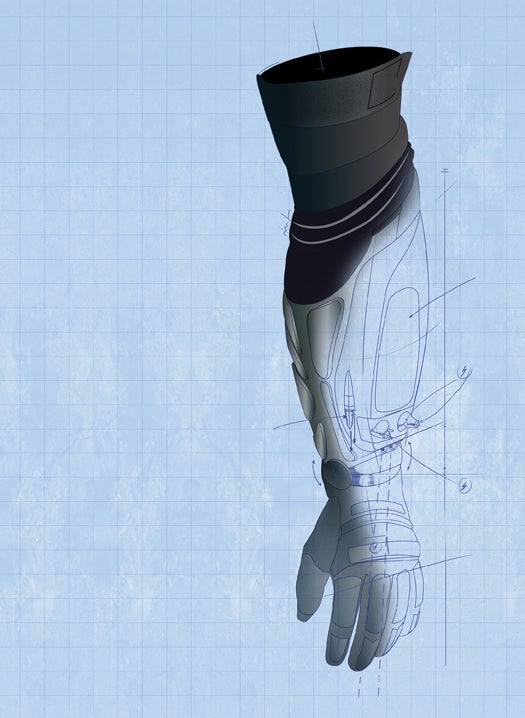 How It Works: Armored Glove

The breathable glove weighs less than three pounds and is encased by a hard shell that extends across the forearm. A pull pin preps the stunner (generated by four electrodes on the wrist), and a button at the palm activates it. Similar buttons trigger the laser pointer, video camera and flashlight.

As he refined the idea, he realized that his natural market was police forces, corrections departments and the military. He made a prototype in 48 hours from a medical arm brace, an off-theshelf stun gun and a fire-alarm button from Home Depot. When Costner saw that early version, he became an active partner. “I could see the application. I could see the deterrent. I could see how it could work,” he says, “and those are the things that get my engine going.”

Seven years and 30 prototypes later, Brown has his first demo model. The components are arranged for ease of use, comfort and to prevent users from stunning themselves. The green laser pointer helps aim a high-definition video camera because, Brown says, a suspect who knows he’s on camera is more likely to cooperate. If the camera doesn’t do the trick, the wrist mounted stunner might. It looks and sounds painful when electricity sizzles between its electrodes, which may encourage an attacker to back off. As a last resort, it may be used to briefly incapacitate a particularly stubborn suspect.

The BodyGuard debuted in May at the U.S. Department of Justice’s Mock Prison Riot, an annual training and technology-assessment event held at a decommissioned penitentiary in West Virginia. The first demo unit will be released to the Los Angeles sheriff’s department later this year. Brown says future incarnations could include chemical sensors, an electronic translator to help soldiers communicate overseas, or biometric readers for airport security guards. “BodyGuard will empower officers worldwide,” Brown says, “and it will save lives.”