This remote-controlled landmine will attack tanks from above

The new mine could also be disarmed from miles away to allow friendly forces to travel safely. 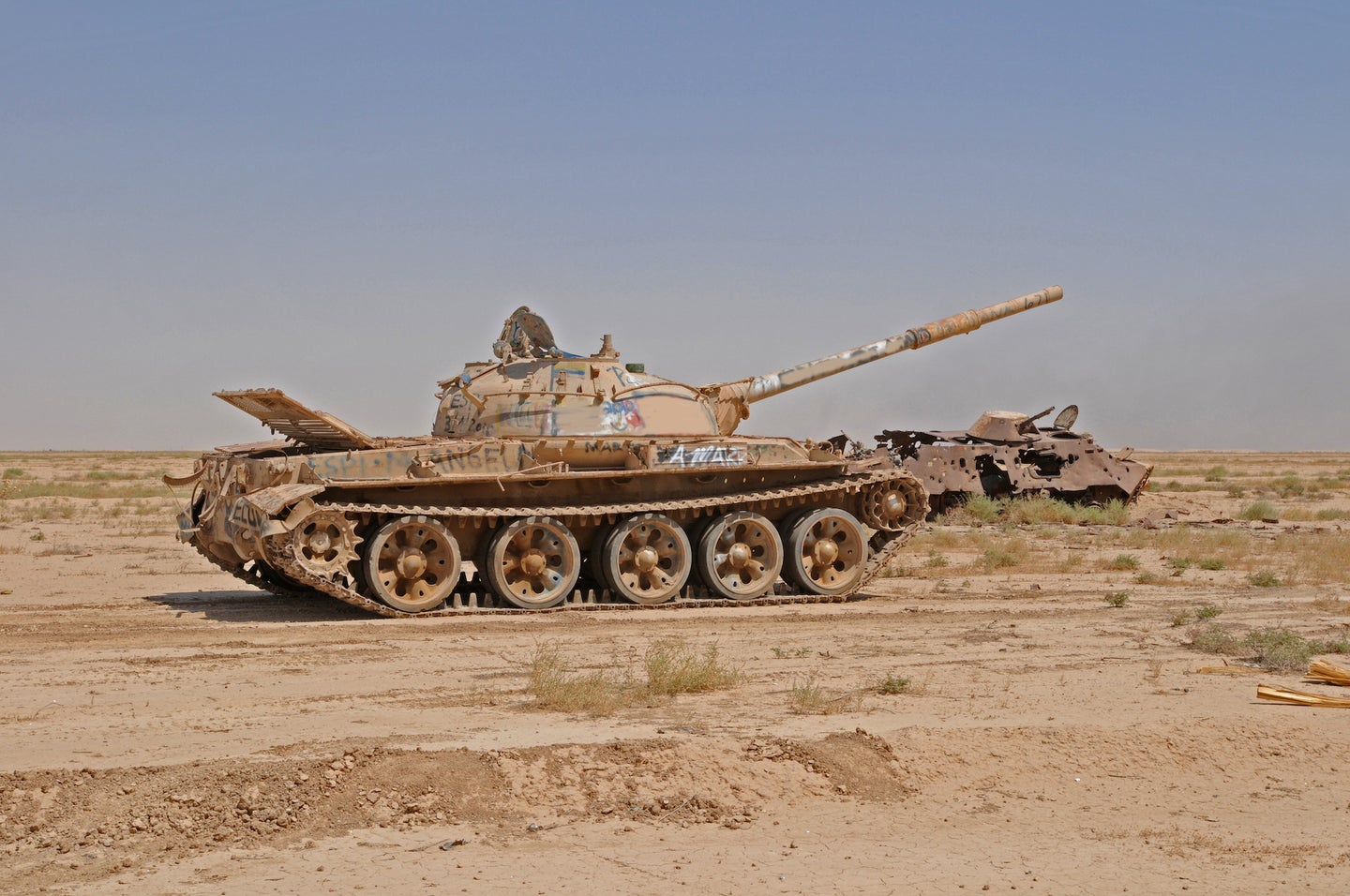 A tank in Iraq in 2011 used for target practice. Edward Daileg / DOD
SHARE

To control battlefields of the future, the US Army is looking for a new anti-tank landmine with a specific upgrade: it can be set in place by robots, and it will share its sensor data remotely with human operators far away.

Ever since the first tanks rolled into battle over a century ago, humans have struggled with a basic problem: what is the easiest way to crack open a moving vehicle covered in armor? One of the more durable answers, improvised in 1916 and present to this day, is by hiding an explosive in the ground, and waiting for the tank to drive over it or near it. Many anti-tank landmines are triggered by pressure, specifically calibrated to the weight of a vehicle, while others rely on acoustic and seismic sensors to kick off their detonations.

On April 1, 2021, the Army posted a solicitation for the new anti-tank landmine. Formally, the Army is looking for a “Terrain Shaping Obstacle (TSO) Top Attack prototype,” a clunky jargon-dense phrase that can be broken into two parts. “Top Attack” means that the mine, when set off, will launch its explosive payload a short distance into the air, which will then direct the blast downward onto the top of a vehicle.

Why the top of the vehicle? Tanks are constrained by some fairly basic limits: because of the weight of the armor, gun, ammunition, and crew, the vehicle design has to prioritize defense to focus on the likely directions of attack. The presence of land mines and improvised explosive devices means some of that fortification is allocated to the bottom of the vehicle. Side armor, front armor, and turret armor are all on a level plain with humans or others firing rockets or shells at the tank. The roof, facing the least typical risk, becomes a weak spot, if the weapon can reach it.

Hitting the top of a tank from a weapon dug into the ground is a tricky, multi-part process. Instead of using a pressure sensor, a mine like this might instead sense the slight seismic disturbance of a vehicle driving nearby. Once triggered, the detecting part of the mine will hurtle a second component upwards. This second component will contain the actual explosive payload, and then will blast outward from above the tank.

This won’t be the first device to try to attack a tank from the top. The M93 Hornet, an anti-tank landmine developed for the United States in the 1980s, would listen for a vehicle and then, when one moved within 330 feet, would launch its payload into the sky. An infrared sensor on that payload would look for a vehicle below. Upon detection, it would detonate its explosive, heating and shaping its metal warhead into a high-velocity projectile that would rip through the vehicle’s armor. In the solicitation for the TSO prototype, the requirements explicitly state that this new weapon be deadlier than the Hornet.

So what does a “terrain shaping obstacle” do?

“Terrain Shaping Obstacle,” the other part of this new anti-tank mine’s name, comes from how the Army understands battle. Defeating the enemy through violence remains the goal, but to get to that point, the Army invests a tremendous amount of its doctrine and planning into constraining the ability of its enemies to freely move on the battlefield.

“We want friendly forces to have freedom of maneuver while limiting the enemy’s ability to maneuver against us. Obstacles make all this happen,” Phillip Poteet, who was the Army’s project manager on the Terrain Shaping Obstacle until June of last year, wrote in 2019. “Obstacles can be ditches, wire, natural restrictive terrain and, in this case, lethal munitions.”

Killing people in battle is an essential part of how the Army sees its anti-tank mines, but it’s a part of the weapon that is actually secondary to forcing any potential fight with tanks to happen on terrain the Army selects.

There are international treaties governing landmines, though the United States is party only to some of them. That has left landmine policy at the discretion of presidential administrations, and since the end of the Cold War, the United States has mostly trended away from actively deploying anti-personnel landmines, with a major exception for a stockpile designated for use on the Demilitarized Zone between North and South Korea.

These mines, unlike anti-tanks ones, can be triggered by people, and are notorious for resulting in the deaths of civilians, including children, long after the end of any war in which they were used to “shape terrain.” Any explosive used in war carries the risk that it will kill someone other than the target. Landmines, specifically built to wait until detonation, risk casualties years.

The big exception to this policy came in January 2020, when the Trump administration announced it was relaxing rules against anti-personnel landmines. On April 6 and 8, different Biden administration officials released conflicting statements regarding the new administration’s stance towards the Trump-era policy, which will remain in place until it is revoked.

Despite not being governed by the same treaties, many of the technological developments in anti-tank landmines could have applications in the design of new anti-personnel landmines. In this regard, the TSO draws from other recent developments, like the networked Spider munition launcher, which has the ability to be remotely detonated or disabled by a human controller.

The new mine and human control

The TSO will, like all landmines, be designed to detonate autonomously, attacking a vehicle from at least 160 feet away.  There is also human control baked into the requirements. This likely requires that a human user and a deployed weapon remain networked for as long as the weapon is employed. Facilitating that control, the TSO system can connect to a tablet used by soldiers, running the Android Tactical Assault Kit operating system.

Because the system will have two-way communication, it could let a human operator check on the self-reported status of the mines, or even disable a field of them temporarily, allowing safe passage to friendly vehicles through it. This communication is required to take place over NSA-approved encryption, providing a degree of security that reflects the dangerous reality that a landmine like the TSO could be remotely hacked by an adversary.

A future goal for the TSO is to have it controllable from over 185 miles away. This means the TOS, which can be put into place by soldiers by hand, can also be set into place by everything from artillery to ground robots to aircraft.

With the TSO, the requirement lists that the mines be capable of operating in standby for six months, including the ability to more actively scan for targets for 30 days. This is a weapon designed to shape a battlefield for the duration of a campaign season, rather than indefinitely.

Regardless of how it is actually employed in battle, the mere development of new anti-tank landmines has the potential to shape future war planning for years to come.