Inside the DIY Weapons Workshop of the Libyan Rebels 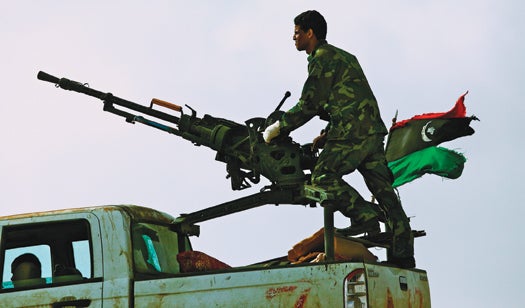 This weekend, the leader of Libya’s governing National Transitional Council, Mustafa Abdul-Jalil, announced that the country was officially “liberated.” After eight months of civil war, Sirte, the last loyalist city and Col. Moammar Qaddafi’s hometown, fell to former rebel control on Thursday. In the midst of chaotic fighting, NTC forces caught the ex-Brother Leader hiding in a drainage pipe.

Grainy but graphic YouTube videos of Qaddafi’s capture show Libyan fighters slapping, spitting and cursing their former despot. When Qaddafi made it to Misrata, Libya’s third largest city, he was dead. Conflicting reports on how exactly he was killed continue to circulate, but an autopsy showed it was a bullet to the head. Libya’s new leadership has said Qaddafi died in a crossfire, but most suspect he was killed by his captors. That hasn’t stopped thousands from queuing to see the mercurial leader’s body laid out on display in a storage cooler.

Jalil’s speech marked a way forward for the embattled country, setting a timeline for national elections in 2012. But now, Libya’s new leadership faces its newest challenge: disarming regional brigades and convincing the citizenry to turn in their weapons.

To take down the Qaddafi military, former rebels formed makeshift militias to clear large expanses of desert as well as urban blocks. In order to pose a real threat to Qaddafi’s conventional force, men from across the country ransacked regime weapons stockpiles and carted off any arms they could find. They formed regional militias and modified old weapons in innovative ways. Today, the weapons used to vanquish the loyalist army are everywhere.

Former fighters brandishing AK-47s and FN FAL rifles are just the tip of the iceberg. When I was in Libya in September, heavy weapons mounted on trucks were all over the place. Weapons modification garages were churning out new ideas and fixing their weapons for the final Sirte offensive.

Former rebels took apart 14.5mm machine guns from Russian-designed ZPU-4 antiaircraft weapons and mounted each one on a pickup truck. They did the same with ZU-23mms, Soviet anti-aircraft twin-barreled autocannons, and Grad multiple rocket launchers. They took 106mm recoilless rifles and sawed off the truck cab to make space for the cannon.

The trucks are a sight in themselves, armored by welded sheets of steel painted green, red and white, the colors of the revolutionary flag. Fighters from Regional militias drove in small convoys, their brigade name displayed prominently across the sides of their vehicles. Crammed with guns, grenades and ammo under their legs, everyone that could get it had a heavy artillery in the back.

I visited Misrata’s central weapons modification workshop after Libya’s third largest city threw off a three-month siege by loyalist troops. They took all the arms they could get their hands on and made them more lethal. They had fought for their lives on the city’s main thoroughfare that spring.

Arif Abuzed was an engineer in the national Libyan Steel Company. When the revolution began the 47-year-old decided he was too old to fight on the frontline, so he started using his expertise to help alter weapons. He joined Misrata’s central modification workshop in May. He told me he got some of his inspiration from watching television, seeing how other fighters across Libya were using weapons and trying to improve on their tactics.

Abuzed’s favorite was the improvised, shoulder-fired rocket launcher that was designed for use against armored vehicles. Initially, the workshops affixed the UB-32, a launcher designed to fire Russian S-5 rockets from a helicopter, on a truck. But they found they couldn’t hit designated targets properly—rockets from the middle of the pod shot straight while the outer ring curved to the side.

They discovered they could remove the 68mm rockets and shoot them out of a makeshift tube triggered by a button and nine-volt battery from their shoulder. Now easily mobile, it can take out tanks from a range of six miles and one battery lasts about 50 launches. “They’re effective and they’re easy to handle,” Abuzed told me, beaming with pride.

“We were all civilians, engineers, technicians, store keepers, ladies’ fashion retail owners, and drivers,” he explained on a narrow wooden bench over the cacophony of saws and blowtorches in the workshop’s welding room. “We never wanted to do this, it was a necessity.”

Ali Mohamed, the workshop’s assistant director, was a truck driver before the revolution; he owned his own autorepair shop. He told me his weapon of choice is the 23mm. “It’s the most intimidating,” he said. “It has an impact on whatever it hits and since it’s automatic, it can fire multiple hits.”

The 35-year-old has a nine-month-old son and a five-year-old daughter. His blue eyes light up when I asked, back in September, what would happen to his newfound weapons expertise next?

“When the war is over, I’m going to remove all I’ve seen and bury it. Erase it from my memory, we’re peaceful people,” he said, almost pleading, after he spent the morning guiding me through various weapons systems and modifications.

Now, over a month after I met Mohamed, the war is officially over and Libya is free. In Misrata, Libyans gaze at the body of their former despot. Somewhere Mohamed is probably rejoicing. After eight months of civil war, the world will be watching to see if former rebels like Mohamed make good on their promises.