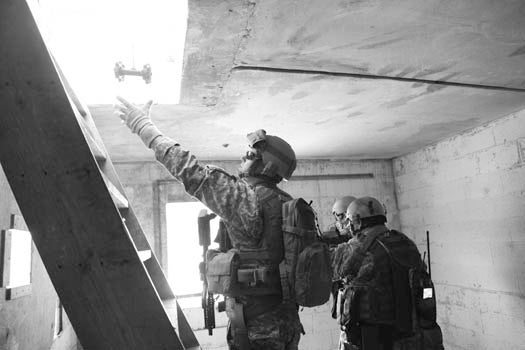 “One time we dropped it out of a helicopter from more than 100 feet,” one of the designers tells me. “The worst that happened was that one wheel was slightly damaged so it wanted to drive a little wobbly. But it still rolled.”

I’m at AUVSI’s (that’s the Association for Unmanned Vehicle Systems International) Unmanned Systems North America convention at the Recon Robotics booth, checking out the company’s Scout reconnaissance robot, a tiny two-wheeled system weighing just more than a pound. It’s a diminutive machine, about the size of a tallboy beer can. And I’ve just been invited to chuck it over an eight-foot wall.

At an exhibition boasting some seriously mean-looking machines (QinetiQ’s MAARS robot sports a 7.62-millimeter machine gun and four 40-millimeter grenade launcher tubes) these little throwbots (that’s a throwable robot, and also a brand name of one of Recon’s variants) aren’t exactly an intimidating sight. But their portability and durability serve a mission profile that is becoming increasingly attractive to troops serving in theater, and at AUVSI’s robot roundup last week it showed. It seems like every company with a stake in the ground-based robotic recon game is bringing out a robot that you can literally hurl into action.

Tactical robots have gained a ton of traction within the military over the past decade for several reasons, not least of which is the fact that any time you send a robot to execute a dangerous task, you’re not sending a human. But robots are generally complicated, fickle machines packing a lot of moving parts (and a lot of extra weight). They often require soldiers to undergo special training just to learn how to use them.

What soldiers in, say, Afghanistan really need is a robot intuitive enough that any soldier can pick up the controls, and something highly portable and easily deployable on a moment’s notice so it can quickly begin feeding real-time intelligence to mission commanders when threats emerge on short notice.

In short, they need a small, simple robot they can throw or launch over walls or into second-story windows, something that soldiers can control with handheld Xbox-like controls that come naturally to young men and women of a certain generation, something that can beam them back video and/or other information from a safe distance (and as stealthily as possible). And at AUVSI that need was being met with a smattering of little robots that company reps couldn’t wait to let us abuse.

In a demo at AUVSI’s makeshift proving ground, I watched QinetiQ’s Dragon Runner series ‘bots roll up and over obstacles and dig in the sand for the lead wires of mock IEDs. The newest addition to the QinetiQ family, the Dragon Runner 10, is an 11-pound variant of its larger brother, the 20-pound Dragon Runner 20 which has been on the market for some time now.

Both are man-portable, but the biggest difference between Dragon Runner 10 and Dragon Runner 20 (besides the obvious weight/portability difference): Dragon Runner 10 is being billed as throwable at ranges up to 12 feet. That’s no 100-plus-foot plunge from a helicopter, but it’s enough to make it over a high wall when Marines want to see what’s waiting on the other side–in IR-enhanced low-light vision if necessary.

And Dragon Runner 10 has some other serious merits. Though heavy at more than 10 pounds, it has a 5-pound payload capacity that can accommodate extras like a robotic arm (which is how it was able to dig in the aforementioned sand for IEDs). It’s a throwable ‘bot that does more than just reconnaissance–at the cost of a little added weight.

Roll out with iRobot’s FirstLook and you can cut that poundage by more than half. FirstLook is purely a recon ‘bot–no manipulator robot arm here–but at just 5 pounds it offers the same IR capability and has front, rear, and side-facing cameras. It’s a two-tracked robot resembling a seriously pared down version of iRobot’s renowned PackBot. And the wrist-mounted touchscreen display lends that air of warfighter-of-the-future we’ve come to expect from iRobot.

Throwability is pretty good too, as iRobot claims FirstLook can manage drops onto concrete from 15 feet. If the company’s representatives have any misgivings about this claim, it doesn’t show. They were happy to toss FirstLook carelessly up and down the aisles at AUVSI purely for my–and their–amusement. And the robots never missed a step, save the few seconds it took for them to right themselves when they landed upside-down.

But for pure throwability, there’s still nothing like Recon Robotics’ Scout. The whole system is practically featherlight at 1.3-pounds (plus a couple more for the control unit, for a total of 3.2 pounds). Both robot and control unit can charge from the battery systems troops already carry with them into the field–no added weight in power supplies–and its titanium shell and cast urethane wheels ensure a listed drop shock resistance of 30 feet–twice that of any other we saw at AUVSI.

Its throw shock resistance is listed at four times that distance (that’s a 120-foot radius from the operator where this Throwbot can be deployed via hail mary or a launcher device Recon has in the works). It’s capable of the same IR night vision as Dragon Runner and iRobot, but is hands-down the smallest, most discreet of the three.

Needless to say, I didn’t have the space (or, likely, the arm) to test the limits of the Scout’s range at AUVSI. But I did get to throw it onto the roof of a faux building the company had constructed and then, with it out of view, drive the thing around via the tiny video screen embedded in the single-joystick controller that’s so intuitive and easy to use that I felt like a pro after ten seconds at the stick.

Hurling a robot overhand and then driving it around remotely is just as much fun as it sounds, but it also makes it demonstrably clear just how easy and effective these kinds of robots could be if, say, you’re about to commit several breathing humans to breaching a walled compound.

And I’m not the only one who thinks so. Dragon Runner and FirstLook are brand new, but Recon’s first variants of the current line of Throwbots have been available for a few years. To date, they have put 2,000 of them into service. Virtually every agency with reason to worry about what’s around the corner has deployed them: the U.S. military, various police and firefighting departments, the FBI, DEA, U.S. Marshals, the State Department (for embassy security), the Border Patrol, and more than 200 SWAT teams. Just today, U.S. Special Operations Command announced that it is buying nearly 400 more.

QinetiQ’s and iRobot’s models will likely find similar traction alongside other small, throwable ‘bots that are likely incubating in labs elsewhere, because they meet a critical need for fast, actionable situational awareness on the battlefield. It’s been said that knowing is half the battle. It looks as if throwing could become an integral part of it as well.