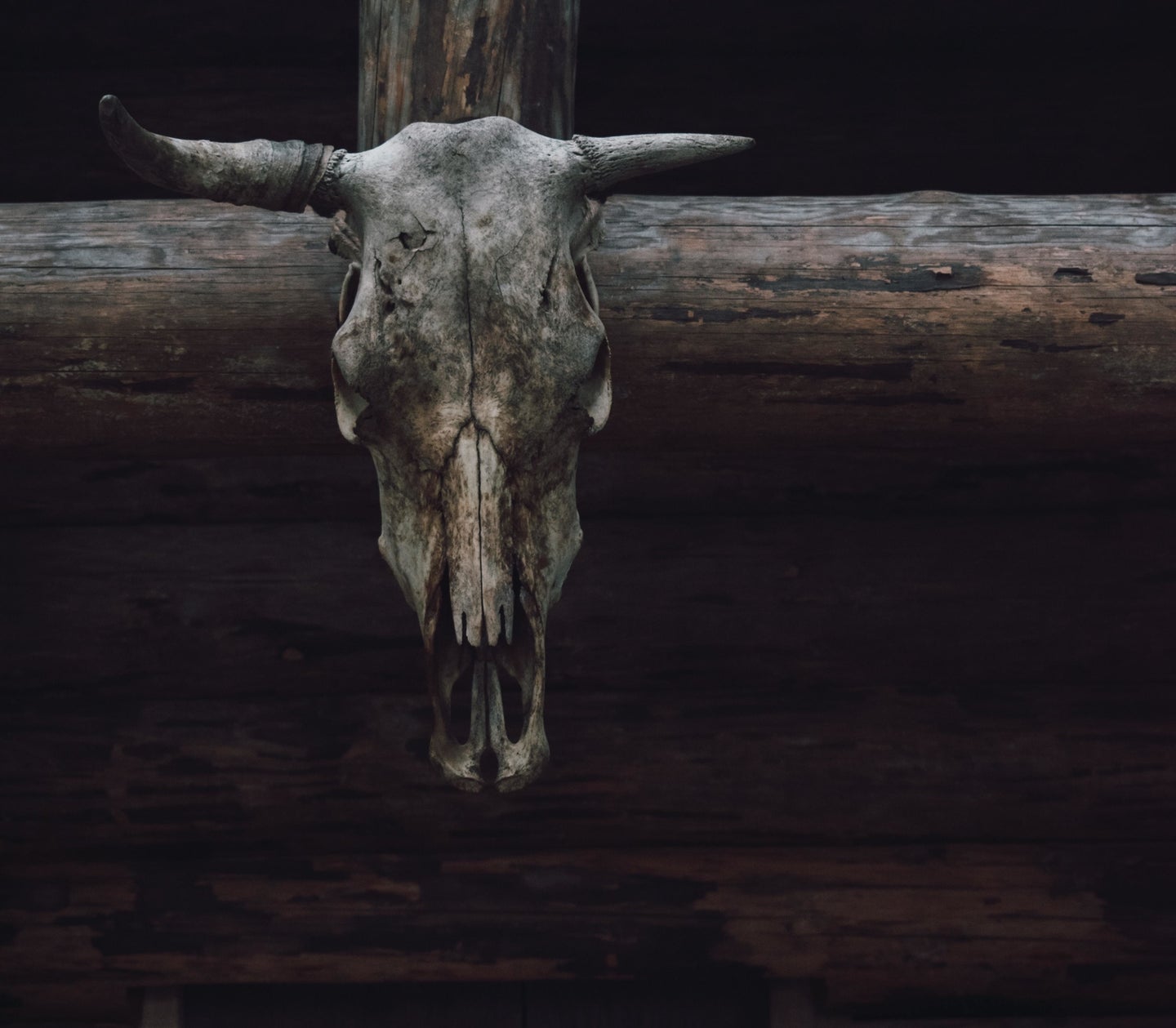 Some people use bones as macabre decor, but they're good for so much more. Artem Maltsev via Unsplash
SHARE

Imagine sitting down to a meal of ground-up bone, served on a plate made of burned bones, while two musicians—one rattling two sawed-off ribs together and the other ominously shaking part of a horse’s skull—provide grim ambience in the dim candlelight. Off in the corner, an oracle shoves some bones into a fire in an effort to predict whether the crops you just fertilized with shattered bones will yield a hearty harvest.

It might feel like you’re in the opening scene of the latest binge-worthy adaptation of a popular fantasy series, but this is real life. Or, at least, it would be if you mashed everything you’re about to read into one time period.

Humans have found unique uses for skeletal remains since prehistoric times. You may be familiar with bone arrowheads, fish hooks, and jewelry, but you may be surprised to learn how bones have found their way into the everyday lives of both ancient and modern people. Let’s journey beyond the grave.

There are plenty of musical instruments that look like bones or include bones as part of their design. For example, artist Bruce Mahalski and guitar maker David Gilberd teamed up to build a bone guitar that features about 35 skulls. Super metal, yes, but not quite bony enough. It’s still, at its heart, a guitar.

For instruments straight-up made out of bone, two stand out: the aptly named “bones” and the jawbone. Even if you only listen to the latest pop songs, it’s possible you’ve heard the former without realizing it. In 1949, Freeman Davis, known as “Brother Bones,” recorded a version of the Jazz Age standard “Sweet Georgia Brown,” which found widespread fame after the Harlem Globetrotters picked it up as their theme song three years later.

You’re more likely to find them made out of wood today, but in their most basic form, bones are a pair of animal rib bones—usually sheep or cow— cut down to between 5 and 7 inches long. Players hold them between their fingers, curved sides facing each other, and knock them together with deft flicks of their wrists. Like skilled tap dancers, experts can create a vast range of percussive sounds.

The bones have their roots in traditional Irish and Scottish music, and immigrants from those countries brought them to America, where they found a home in bluegrass and other folk genres. They’re similar to other clacking percussion instruments like the spoons, the Chinese paiban, and castanets.

The jawbone, meanwhile, is originally an African instrument that made its way to the Americas as a result of the slave trade. It’s usually the jawbone of a horse or another equine (like a donkey or zebra), that’s been stripped of all flesh and dried.

Once it’s dry, the teeth become so loose they rattle around in their sockets. But it’s more than a simple rattle—players can create other sounds by striking the jawbone with a stick or rubbing the wood across its teeth.

It’s a little more niche, but you may have also heard the sound of a jawbone without realizing it—the vibraslap, patented in 1969 by Martin B. Cohen, was designed to sound exactly like it. Cohen said in his patent application that he’d found it hard to replace actual jawbones when they break.

Yeah, you’ve heard of necromancy, and probably pyromancy. Now, get ready for scapulimancy and plastromancy. Relatives of pyromancy, these two divination practices involve writing questions on bones (usually large animal shoulder bones or turtle plastrons), heating them up until they crack, and then interpreting the cracks.

How they were heated is unclear and likely varied. Some sources simply mention fire, while others describe diviners inserting hot metal rods into holes drilled in the bones.

These practices weren’t restricted to any particular region, either, and ancient people worldwide had their own versions. Inhabitants of Europe, western Asia, and North Africa simply inspected the natural condition of the bone after all flesh was scraped away, but those who lived in North America and other parts of Asia used fire, according to David N. Keightley, a former professor of Chinese history at the University of California, Berkeley.

Perhaps the most well-preserved oracle bones come from China, most of which date back to the Shang dynasty (1600-1046 BCE). About 20,000 pieces (mostly ox scapulae and turtle plastrons) were dug up between 1928 and 1937 during official excavations around the dynasty’s capital city of Yinxu, about 300 miles southwest of modern-day Beijing. Most turned out to be predictions performed for the royal family. This discovery, among others, helped Chinese archaeologist Li Ji prove that the Shang dynasty actually existed.

The Carnegie Museum of Natural History in Pittsburgh has a large collection of these bones in storage for research purposes. Amy Covell-Murthy, who manages the museum’s archaeology collection, said the inscriptions on their bones ask questions like whether or not someone will have a baby, which crops to plant in a field, or how a war will turn out. She also said some are fakes, but that they still hold value because they’re at least 100 years old themselves.

Unlike true porcelain, which contains only minerals, the ceramic material known as bone china includes bone ash. It originated in England in the 1700s and for a long time, most, if not all, bone china was made there.

A few potters and companies experimented with bone ash as they sought to bulk up their soft-paste porcelain to rival the stronger hard-paste ceramics made in China, but Josiah Spode I is generally understood to have been the one who standardized bone china production. When he died, his son, Josiah Spode II, took over and continued to improve on his father’s work.

Today, bone china is made across the globe by companies such as Lenox, which has made numerous pieces for presidents dating back to 1918, and the Spode family’s eponymous business, Spode.

All living things need phosphorus, and bones have a lot of it. This is why bone meal, as ground-up bones are called, has found its calling as plant fertilizer. Without phosphorus, plants can’t function, can’t grow, and can’t photosynthesize, says Dennis Stevenson, vice president for science at the New York Botanical Garden. Bone meal is also high in calcium, which plants need for their cell walls.

But with its benefits come some potential problems. Health experts say some bone meal can be high in lead, and possibly also mercury. It’s also got a bit of a dark history in the U.S., dating back to the near-total destruction of the American bison.

The hunting of these thousand-pound animals was driven by their highly prized skins, but also by the U.S. government, which promoted hunting in an effort to starve Native Americans and force them onto reservations. Hunters would kill and skin bison, but often left the carcasses littering the Great Plains. As settlers moved west, they began picking them up and selling them to use as fertilizer.

The revelation that gelatin is made out of animal parts is a common one. But the simple fact that everyone seems to have this somewhat traumatic revelation at some point in their lives made it seem relevant for this list. If you already know this, great—maybe you’ll learn something new here anyway. And if you didn’t, now you do, and you can reveal it to others in your life.

Most gelatin is made from the byproducts of the meat and leather industries, usually bones and skin. In its purest form, it’s 98 to 99 percent protein and is nearly tasteless and odorless. Its use dates back to the medieval era, and because it was hard to make, it was originally just for rich families.

Today, it’s still pretty complicated to make, but industry has taken much of the hands-on labor out of it. According to the U.S. Department of Agriculture, the 20-week process for making gelatin out of cattle bones starts like this: The bones are crushed and cooked at 180 to 250 degrees Fahrenheit before being spun in a centrifuge, dried at 160 to 270 degrees, degreased, and treated for five to seven days with a weak hydrochloric acid solution.

Then, the ground-up bones are washed several times with water and treated with a lime slurry (not the tasty tropical kind) for one to two months in an effort to remove everything that’s not collagen. After that, the almost-gelatin is washed again, made more acidic, and may be filtered. Finally, its pH is made more neutral (between 5 and 7), it’s sterilized at 280 to 290 degrees for several seconds, cooled, and dried with hot air for 1 to 3 hours.

This stuff ends up in obvious foods like gummies, but can also be used in a wide variety of ways to stabilize, thicken, and add texture to the things we eat. It’s also used to make modern film.

Gelatin and animal glue are closely related, though use of the latter has largely disappeared. At least as late as the early 2000s, gelatin-based glues were used to stick those “organic” stickers on fruits and vegetables, the USDA says.

Animal glue has a long history, and in 2014 researchers found that it was used to hold together the painted layers of Chinese emperor Qin Shi Huang’s massive terracotta army. It was used worldwide until the early 1900s, but was essentially eliminated by the invention of synthetic adhesives.