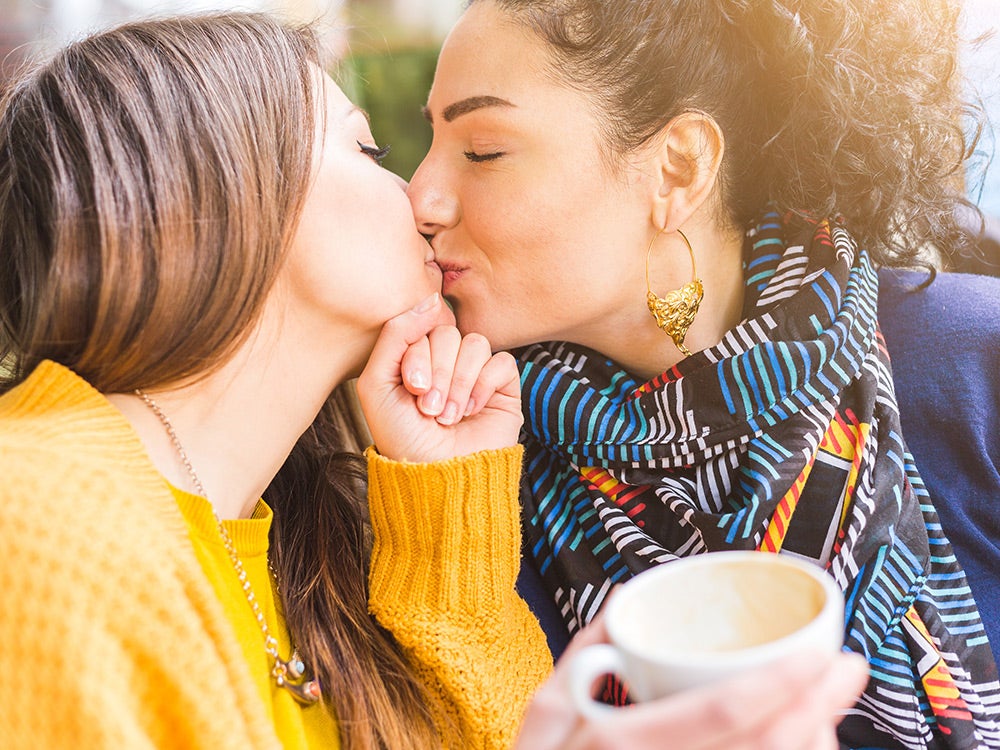 Example B, this time with coffee!. Deposit Photos
SHARE

Is there anything as swoony as a long kiss? The simple act of pressing your lips to someone else’s can fuel everything from lust to love. But what does science say about your smooch session? Turns out there’s an entire field—philematology—devoted to the study of kissing. Over the years, researchers have devoted plenty of brainpower to figuring out what happens when human lips meet. Here are a few highlights from the existing body of research on why and how we French, snog, neck, smooch, and just plain pucker up: Maybe we started kissing ‘cause we were hungryIn the earliest days of kissing research, scientists looked to monkeys in the hopes they could unlock truths about human liplocking—and soon, they learned that our species may have started making out because stomachs were rumbling. As early as 1915, researchers observed what looked like kissing in adult chimps. But they were often actually “kiss-feeding,” a friendly but not-so-romantic way of getting pre-chewed food into one another’s mouths. That led to one of the most prevalent theories as to why humans kiss—that the behavior evolved from our ancestors’ gross way of passing the potatoes.

But though some primates, like chimpanzees and bonobos, do seem to kiss like we do (and even slip in some tongue) it turns out that humans are nearly alone in the animal world when it comes to the desire to kiss romantically. How come? It could be our way of passing along cues about our willingness and ability to mate. Since humans emit chemical signals through their saliva, kissing could be our equivalent of, say, peeing all over the place or flying upwind of a potential partner.

Saliva does contain sex-related chemicals, like testosterone, and the mouth’s mucous membrane is susceptible to those hormones. Maybe that explains why some people prefer a deep tonguing to a chaste peck.

In 2007, a group of social scientists surveyed over 1,000 college students about their kissing preferences. They found that men liked sloppy kisses more than women and hypothesized that males, who are generally “less sensitive to chemosensory cues,” might need to come into contact with plenty of saliva to determine whether a woman’s worth mating with. Or maybe guys just like spit?

(Side note: kissing research, like all scientific research, is woefully inadequate in its attention to folks who are not heterosexual and cisgendered. Popular Science endorses all kinds of kissing between all kinds of happily consenting people with all manner of sensitivity to chemosensory cues or lack thereof)

Kissing can get you sick—or can it?

It’s probably not surprising that a huge amount of kissing research focuses on whether a smooch can be a kiss of death. The earliest kiss questioners were obsessed with whether kissing could kill us.

“Kissing is extensively and injudiciously practiced by those who have arrived at the years of discretion,” wrote Samuel S. Adams, a physician, in the Journal of the American Medical Association, “thereby setting a bad example for those of less mature judgment.” Adams was writing in 1886, a time when plenty of kisses were taboo. But he wasn’t talking about the social dangers of fast-and-loose caresses. He was legitimately afraid people would die by kissing, and he brought examples of snogging leading to everything from diphtheria to syphilis, salivary tumors and other diseases.

Adams’ article prompted other doctors to write in to the journal and share their horror stories of kissing as disease vector. One correspondent told the tale of a young, married woman who contracted syphilis even though she was “pure.” Turns out her brother had kissed her on the mouth.

Research into the dangers of kissing can reflect scientists’ biases and preoccupations, and tell us as much about a time period as an individual researcher. In 1989, at the height of the HIV/AIDS crisis, scientists sparred over whether kissing could pass on the virus. While closed-mouth kissing and even saliva swapping is no longer thought to transmit the virus, “passionate,” open-mouthed kissing with an HIV-positive person who has gum disease or bleeding lesions inside their mouth (and a detectable viral load, which is now avoidable thanks to modern antivirals) might. However, the risk is tiny.

By the way: If you’re planning to kiss a corpse, think twice—at least one case of contact dermatitis was discovered in a woman who gave a dead relative a smooch.

It leaves a lasting impression

It’s not surprising that the world of medicine has paid lots of attention to kissing, but some of the most interesting kissing research can seem to come from left field. Take forensics, which has yielded some unsettling insight into what kissing does to our bodies. Researchers had 12 pairs engage in “intense kissing” (best experiment ever), then studied their saliva. In a 2013 paper in FSI Genetics, they revealed that male DNA persisted long after the actual kiss occurred—up to 60 minutes.

The premise seems lighthearted, but that lingering taste of dude DNA has some serious implications. The team concluded it could used to document sexual harassment, rape, or infidelity. Perhaps one day, your kiss could be used against you in court.

There could be a more efficient way to do it

Mathematicians and computer scientists even have a stake in smooching. Multiple researchers have tackled what’s called “the kissing problem”—a thought experiment about the most efficient way to kiss everyone in a room goodbye. Think of it as a hypothetical way to figure out how quickly a crowded party can break up without leaving anyone out. This “problem” can be expressed geometrically and used to teach students how to tinker with graphs and even game theory. In a 2014 paper in Theory of Computing Systems, a group of computer scientists worked out multiple algorithms for the most efficient kissing patterns in a crowded, comfortable, and sparse room.

Just don’t confuse this kissing problem with another kissing problem Isaac Newton and David Gregory quibbled over in the 17th century. That problem has to do with the number of spheres that can “kiss,” or “touch,” a central sphere without overlapping, and it’s tantalized mathematicians for years.

Sometimes we don’t kiss at all

What happens if you don’t work out those lips on the regular? Don’t worry, science has studied that, too. Earlier this year, a group of researchers looked at the lives of American college students who have never been kissed—and discovered that they “were more neurotic, had mothers who were less facilitating of independence, and had lower self-esteem.” But the outlook wasn’t entirely grim for those who kept their lips on lockdown. They didn’t seem to be less healthy than their peers, and actually consumed less alcohol and were more academic.

And anyone who’s longing to be kissed might take comfort in the fact that, overall, humans don’t even kiss that much. Though the practice is widely considered to be good for bonding, mental and sexual health, a much smaller number of people than you might think use it to express affection. In a 2015 study published in American Anthropologist, researchers found that only 46 percent of the 168 human cultures they studied intentionally touch lips. The researchers concluded that kissing is far from universal, and that it may be questionable to look for answers about human biology or survival in smooching. But that doesn’t mean it’s not fun (or sexy) to try.