This comet stuffed inside a meteorite is the ultimate cosmic turducken

And it could teach us about the early solar system. 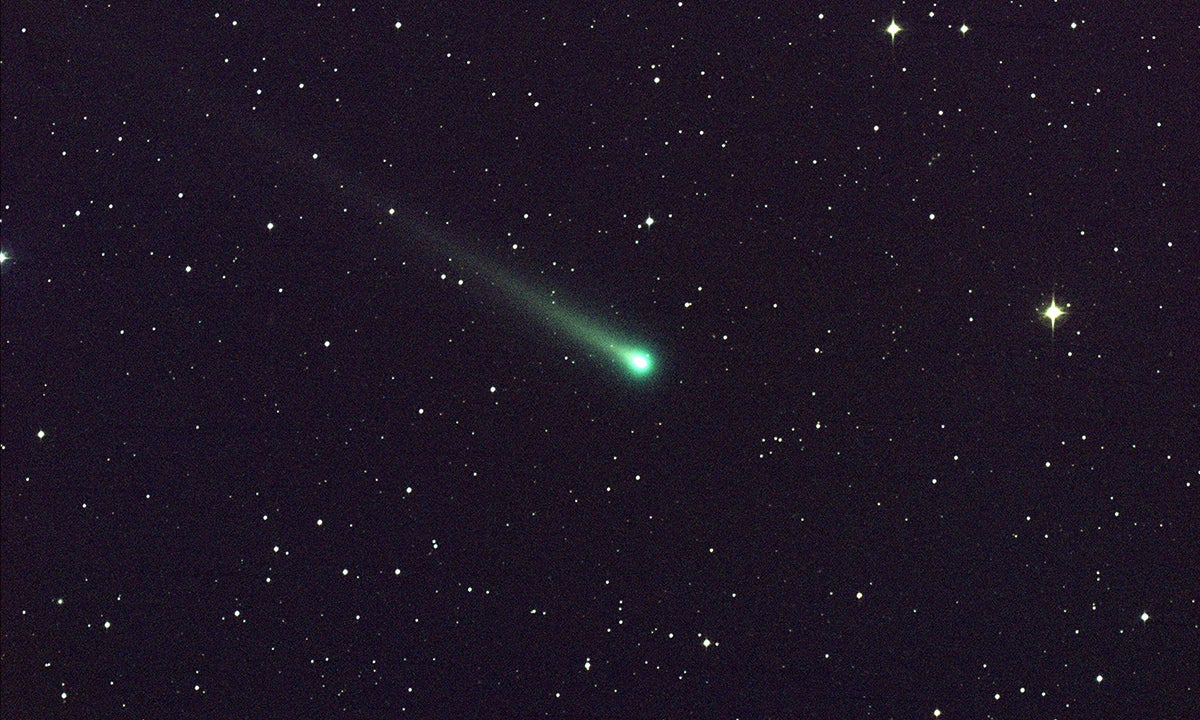 It’s hard to imagine the cosmos putting its own spin on the classic turducken dish (a chicken stuffed into a duck stuffed into a turkey) but it looks like scientists have found it. In a new study published in Nature Astronomy, a group of international researchers describe what appears to be remnants of an ancient comet preserved within a slightly-less-ancient meteorite. Called LaPaz Icefield 02342, the object is unlike anything ever discovered before, and could lead to some shifts in how we understand the formation and evolution of the solar system.

The 3-centimeter-long LaPaz rock was found in 2002 during an American meteorite hunting expedition in Antarctica. (Yes, those are a thing, and they are as adventurous and treacherous and you might imagine.) It was immediately classified as a carbonaceous chondrite (stony, non-metallic meteorites that haven’t changed much since they formed about 4.6 billion years ago, when the solar system was just coming into form). The mineralogy and chemistry of a meteorite can often illustrate what the early solar system looked like, and the group of chondrites the LaPaz meteorite belongs to are particularly interesting for the amount of preserved organic minerals and material they possess.

As the team investigated more intently, however, it became clear this was not just a garden-variety chondrite. “Oxygen isotope measurements revealed that one special section of the meteorite, about one-tenth the size of a poppy seed, contained a much greater abundance of preserved dust from ancient pre-solar stars than did all the other areas we measured,” says Rhonda Stroud, a researcher with the U.S. Naval Research Laboratory and a coauthor of the study. At that point, it was clear the meteorite wasn’t entirely a meteorite.

The chemical and mineral makeup of the object’s insides bore this suspicion out in greater detail. More than 70 percent of the inner clast’s volume is comprised of carbon, compared to less than 2 percent for the rest of the meteorite—probably the biggest indication the interior originates from a comet rather than an asteroid. The profusion of presolar grains implies that the insides were more ancient and formed farther from the sun than the rest of the rock, which is much more typical for comets. Some of those grains were amorphous silicates we’ve previously found in comets, but not meteorites. There were also unusual sulfite minerals rarely found in younger meteorites, and even chemical compositions suggesting previous interactions with water from outside the solar system.

The story of how LaPaz came into being is really a story of how the solar system came into being—and that’s what makes the findings so interesting. A huge disk of gas and dust began whirling around the sun 4.6 billion years ago. Some of the material coalesced into the rocky planets we know and love, but a lot more of it aggregated into smaller chunks: asteroids and comets. Comets are smaller, icier bodies with more ancient origin stories, while asteroids tend to be much larger and composed of rocky materials from more recent times (relatively speaking).

“We think that the comet-like inclusion formed much farther from the sun than the parent asteroid of LaPaz Icefield 02342, and for some reason got transported further inward in the disk where it was captured by the asteroid as it grew,” says Larry Nittler, a researcher from the Carnegie Institution of Washington and a coauthor of the new study. While it’s not clear if the inner clast was every fully incorporated into a comet or simply a remnant of original comet building blocks, it eventually landed on an asteroid, and over time became encased within. The LaPaz meteorite is a piece of that larger asteroid that broke off and slammed into Earth, while still retaining those comet minerals.

Those comet minerals are key to learning more about the solar system in its infancy. Stroud explains that material from even the most primitive asteroids is typically found “cooked” (exposed to high temperatures), “soaked” (hydrated), or both, distorting our ability to use these rocks to peer into the past. But comets, she says, “provide cold storage to preserve the most fragile building blocks of the solar system.” In this case, the parent asteroid seems to have been only mildly cooked and soaked, and the high abundance of organic matter in the clast also helped protect the preserved comet grains from high temperatures and interactions with excess water from the parent asteroid.

All of this is to say that the researchers are pretty darn sure the interior of the LaPaz meteorite is from a comet, not a meteorite, and that it formed early and far away. How exactly the rock started moving inward toward the sun is unclear, but as it did, it started to wrap itself in rocky, asteroid-like materials. This younger rock served as a protective turkey around the cosmic duck.

We’re already using the new findings to paint a better picture of the solar system’s history. Stroud points out that the findings double down on previous suggestions that chondritic asteroids formed not in the inner solar system between Mars and Jupiter—where they currently reside—but beyond the orbit of Saturn, where it’s much more likely they would intermingle and mix with the building blocks for comets. This suggests comets were able to form later in the history of the solar system than originally thought, and that some asteroids potentially formed farther out in space than assumed. This could later change our modeling for how comets and asteroids have could have helped deliver organic matter and water to the early Earth, or to other worlds in the solar system.

There are almost certainly more of these sorts of rocks waiting to be discovered. “Studying more such clasts could provide new insight into how comets and asteroids formed, and what the key steps were for forming, preserving, and delivering to Earth the ingredients for life,” says Stroud.