We haven’t seen a rock like this in 50 years. 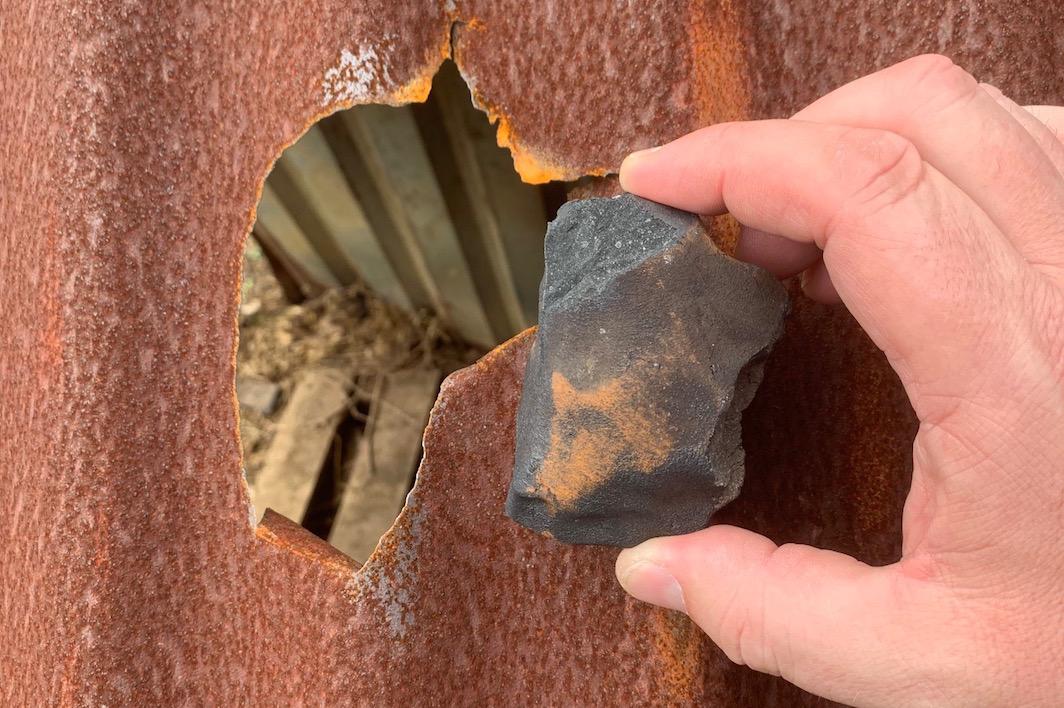 Space science is always about what’s going on ‘out there’. Sometimes, astronomers must pay attention to what’s falling to Earth, too. That’s precisely what Arizona State University’s (ASU) Laurence Garvie is ready to do as he and his team scrutinize an extraterrestrial mud ball that rained down from the heavens last month and landed in a small town in Costa Rica. That’s not a euphemism: We’re talking about a literal mud ball.

In late April, the residents of Aguas Zarcas saw a giant fireball light up the sky as it hurtled towards the ground and broke up into hundreds of pieces in the atmosphere. Within minutes of the fall, local news media reported pieces were falling through the roof of a house at hundreds of miles per hour, destroying a dining room table. “It really arrived with a big bang,” says Garvie.

Early reports showed this meteorite to be a carbonaceous chondrite—which are non-metallic rocks that formed 4.5 billion years ago, back when the solar system was a mere crabby infant. It’s extremely rare for a meteorite like this, so full of clay, to fall down to Earth. “We’ve been waiting for something like this to fall for decades.” says Garvie, a meteorite researcher and curator for ASU’s Center for Meteorite Studies. The last time a rock like this hit Earth was in 1969, in Australia. Others have fallen since, but never yielding more than paltry amounts of extraterrestrial material to study.

Now our planet has been blessedly pelted with another giant mud ball, with an abundant supply of samples available for scientific scrutiny. These sorts of rocks could hold potential clues to the origin of life in the solar system, since they’re chock full of organic compounds that could act as the ingredients for life. The one that fell in 1969, says Garvie, arguably gave birth to the entire field of astrobiology.

The ASU team was able to get in touch with two avid meteorite hunters from Arizona who had traveled out to Costa Rica within a day of the fall to collect pieces of the fireball that broke apart as it torched through the sky. About 55 pounds from the original washing-machine-sized fireball were recovered by meteorite collectors during a lucky five rain-free day streak in the region—critical for preserving clay materials that tend to fall apart very quickly once wet, and thus degrade the unique extraterrestrial properties of the rock. Those hunters donated several samples to Garvie and his team, who were among the first lab’s in the world to begin studying the Aguas Zarcas mud ball.

According to Garvie, the mud ball is more than just a random pile of clay zipping through space. It’s a fragment of a larger body that was on its way to growing into a planet. A larger hot aggregate of cosmic material began to cool down, and effectively “fossilized” into a cold rock, disturbed by collisions with smaller rocks but staying largely intact as it orbited around the sun, likely in the asteroid belt. By chance, it was lodged out of its orbit and ended up hurtling into the Earth’s atmosphere and landing in Costa Rica. Quite a journey for a ball of mud, no?

The list of analyses scientists can run on these samples is seemingly endless. They include more conventional work like observations under infrared or UV light, and spectroscopy assays to understand the chemistry of the material. They also include bolder tests—clays often give us a very pungent and specific set of odors when exposed to moisture, and Garvie and his team are setting up tests designed to figure out the origin of those smells and what they too can say about the mud ball’s composition. Other labs are poking away at digging into some of the meteorites metals, and reconciling how the aqueous and metallic compositions could have co-existed for so long.

While the mud ball’s impact could be key to understanding larger questions about the chemistry of the early solar system, there are also more immediate implications worth investigating. Clays are abundant in water, which raises the specter of potentially mining clay-rich asteroids in space one day for water that’s critical for space travel and exploration. That water could be important for human consumption, growing plants, or potentially used as rocket fuel in novel kinds of spacecraft propulsion systems. “Developing the technologies to heat this material in the asteroid belt, to extract water out, it’s going to be a key point of future space travel,” says Garvie.

The Aguas Zarcas samples are also thought to closely resemble the composition of asteroid Bennu, currently being studied in space by NASA’s OSIRIS-REx mission, which will eventually return of sample of the asteroid to Earth. This makes the mud ball research a sort of prelude to what we might later find in the following decade when the OSIRIS-REx sample is finally in our hands.

A mud ball doesn’t exactly have the same shiny sparkle as a star, but that doesn’t make it any less exciting for scientists to dig into. “Nature’s done the hard job of creating this material,” says Garvie. “Now it’s up to us to tease this out and investigate the history of where it came from, how did it form, and what it can tell us about the early solar system.”