Welcome to the Analemma tower and its half hour elevator rides 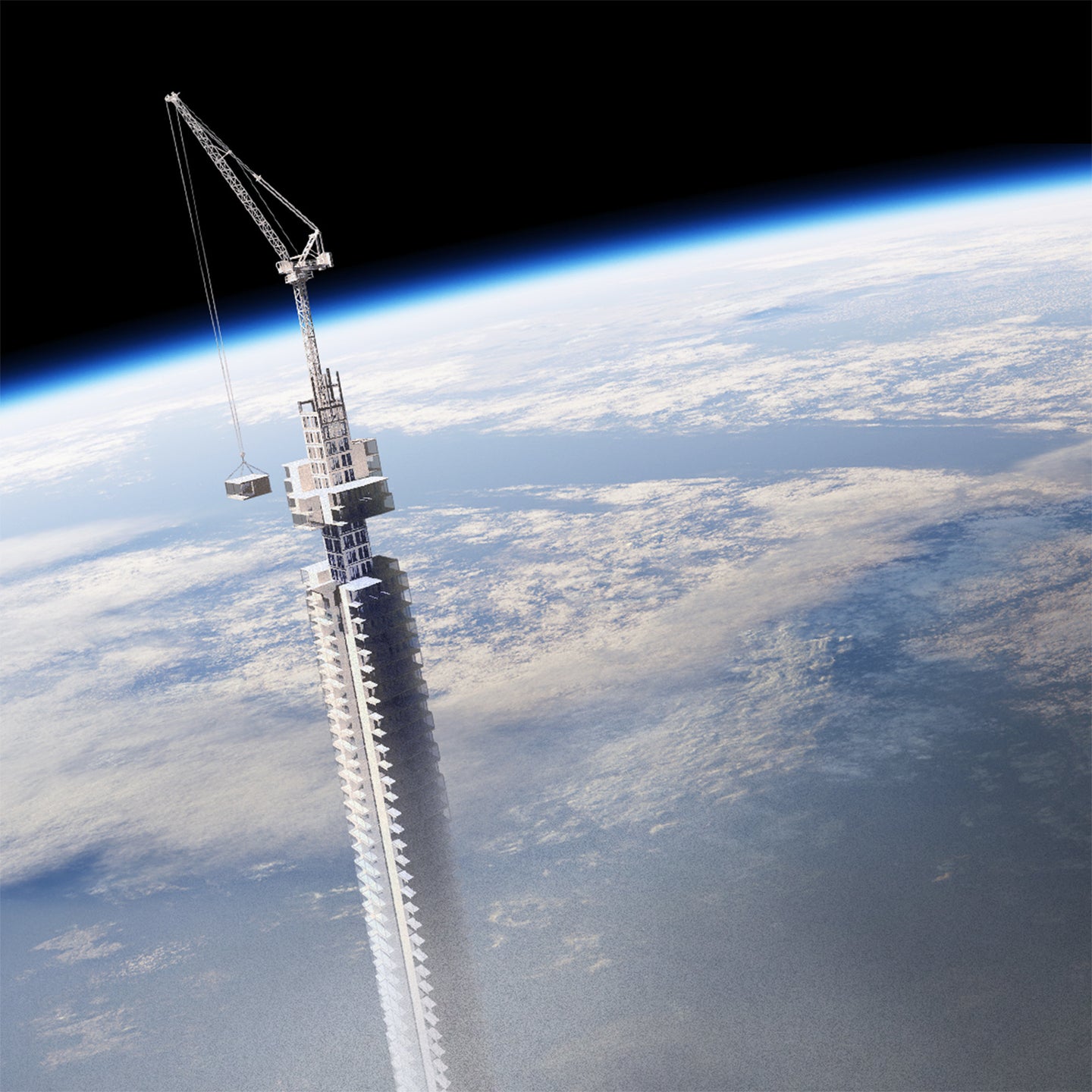 Have you ever wanted to wake up and see the curvature of the Earth? Or wanted to live exclusively indoors? What about go to bed somewhere above Ecuador and wake up near Cuba? Well good news, weirdos—there’s an architect out there thinking of you.

Welcome to the Analemma tower.

It’s about 32,000 meters high (that’s 104,987 feet) and it dangles from an asteroid by a cable many kilometers long. In case it wasn’t already obvious, this is not a building that exists yet, and it’s not a realistic plan. But it’s also not a joke. The firm that designed it, the Clouds Architecture Office, specializes in bizarre conceptual designs. Unlike other architects who concern themselves with silly things like structural engineering or physical necessities, the partners at Clouds AO prefer to think about “the potential of the immaterial” and strive to “create conditions that allow for a resonant experience by the synthesis of ideas through design.” In other words: screw reality, we just want to talk about concepts.

So let’s set aside all the problems with constructing a tower that stretches into the stratosphere. Let’s pretend that there’s a material to make the cable from (even carbon nanotubes would snap under their own weight). And we’ll assume someone could dream up a way to assemble this monstrosity over Dubai, then transport it to New York City (as the architect intends). We’ll also imagine that someone is willing to spend the money to harness an asteroid for it to hang from. NASA estimated it would cost $1.25 billion just to redirect a small asteroid into lunar orbit, let alone lasso a large asteroid into a safe and stable orbit around Earth. But hey—we’re using our imaginations here.

Once you moved into this literal sky-scraper, you’d pretty much be cut off from the Earth. The asteroid that the Analemma would hang from would be in geosynchronous orbit, so even though you’d return to the same spot every day, you wouldn’t just chill over midtown Manhattan all the time. Because of the way the Earth’s orbit is angled (and how it wobbles on top of that), geosynchronous satellites don’t stay over one particular spot on the Earth. They trace a figure-eight pattern.

Un-coincidentally, this pattern is called an “analemma.” Even geostationary orbits aren’t precisely stationary—they just have figure-eight shapes that are so small as to be insignificant. From our perspective, the sun forms an analemma as well. If you left a camera in one spot and took a picture at the same time every day for a year, you’d see it form a figure-eight in the sky.

So: you’d board your new home at 1pm in New York, presumably with a strict time limit on how long you have to get on before the building drifts away (which is kind of like double-parking your moving van outside a fifth floor walk-up in Manhattan, to be fair). Then you’d travel toward the southern hemisphere at about 300 miles per hour on average (based on an estimated total mileage for that analemma path divided by 24 hours). Your sky-home would only really be accessible at either end of its elliptical path, and since the other end seems to be off the west coast of Peru, it seems likely your only real dock would be in midtown Manhattan. Though it’s worth noting that you might be able to parachute off at other points…you’ll just have to find your own way back on.

Given how difficult the boarding and disembarking process would be, you’d probably just stay in the Analemma all the time. And remember: you’d literally be inside all the time. The office sections are the lowest down, but even those are high enough up that the wind would be fairly unbearable (especially if you’re moving at 300 miles an hour). The residential sections would float around 8,000 meters high, where it’s -35 degrees Fahrenheit and oxygen is scarce. It would be like living close to Everest’s peak, but with luxury condo finishes.

And even the amazing view comes with caveats: as you got higher up, the shape of the windows would have to change to accommodate the drop in pressure. So the best views would only be seen through small portholes. If you lived at the top, you’d get an extra 40 minutes of daylight every day. That might sound nice, but have fun screwing up your circadian rhythm every time you travel through the building. Even going one time zone over on Earth requires a day for the body to adjust.

The lower windows would periodically have birds smashing into them. Most bird strikes happen below 3,000 feet (or 910 meters), so the residences will be high enough up to avoid them—but the bottom levels will have bird guts plastered all over. These collisions cost $400 million in damages each year, which will definitely be factored into your rent. And you don’t want to be the window washer who has to go outside to clean that off.

Even at 8,000 meters, you’re still not safe from planes. A giant floating pillar would pose something of a challenge for all the air traffic control towers that the Analemma would drift through every 24 hours.

But that’s their problem, right? You, the resident, don’t have to be concerned with redirecting aircraft. You might want to worry about what happens when you go through a hurricane, since you’ll pass right through the Gulf of Mexico. Or maybe about how terrifying it would be to sit inside a lightning storm. On the upside, you could watch the sunset at the bottom, take an elevator to the top and see it all over again.

Of course, the elevator ride itself would take you a while. The fastest elevators in the world are in The Shanghai Tower and move at 20.5 meters per second, so a straight shot to the top of the Analemma would take you just over 20 minutes. And that’s assuming there is a single elevator that goes all the way to the top. One of the logistically challenging things about building very tall structures is how you fit in enough elevators. As Randall Munroe illustrated in a beautiful piece about designing a billion-story skyscraper, you quickly fill the bottom floors with elevator bays, so much so that you have essentially no functional space. The easiest way around that is to not require all of the elevators to go all the way to the ground(STRIKETHROUGH), er, first floor. You can stack elevator shafts on top of each other and simply have sky lobbies. So maybe you take an elevator from floor 1 to floor 50, then get off and take another from 50 to 100, and so on. Keep in mind that you’ll have to wait for the elevator to come each time, and with thousands upon thousands of residents you’ll probably be waiting a while. Maglev elevators would improve the situation, but since they’re not yet a reality it’s unclear how much better they’d be.

But don’t worry: you almost certainly won’t be able to afford it anyway. As its relatable designers stated, “If the recent boom in residential towers proves that sales price per square foot rises with floor elevation, then Analemma Tower will command record prices, justifying its high cost of construction.” So apparently we’ll just lock a bunch of billionaires in a tower—billionaires who desire “extreme height, seclusion and constant mobility”—and watch them float away.

And in case you’re wondering if this is a joke — it isn’t. One of the Clouds AO partners, Ostap Rudakevych, talked about it at a conference in December 2016. If this is some elaborate April Fools’ prank, then give Rudakevych his award. He’s played the long con and won. And honestly, that’s a happier reality to live in than one where someone actually thinks this is a good idea.