Some neurosurgeon fans decided to investigate. 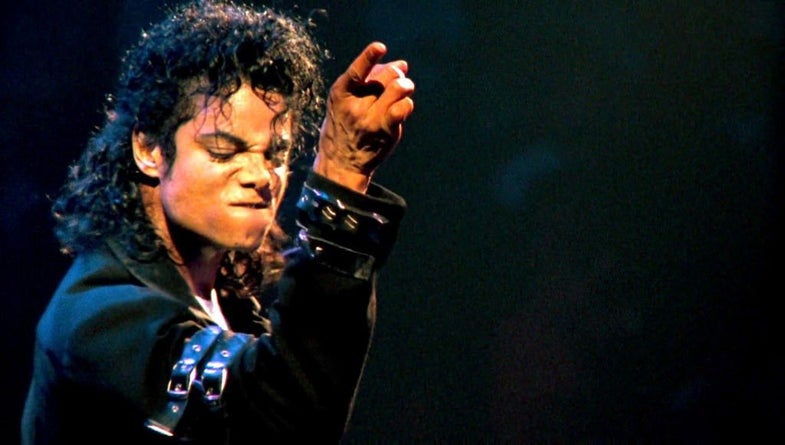 Before reading the rest of this article, please first stand up and try to tilt your whole body forward at a 45 degree angle. You may only bend at the ankle. Assuming that you are not Michael Jackson, you will fail at this endeavor.

But why? Do you not have the incredible core strength Michael Jackson possessed at his peak? Honestly, probably not, but even if you did you’d be unable to perform Jackson’s famous anti-gravity tilt from the music video for “Smooth Criminal.” And if you’re a true fan, you’ll already know why—but don’t worry, you’re still about to learn something cool.

This mysterious dance move intrigued three neurosurgeons at the Postgraduate Institute of Medical Education and Research in Chandigarh, India, and being highly motivated individuals they set out to analyze whether it’s even physiologically possible to lean forward at 45 degrees while keeping your entire body rigid. They published their results in the Journal of Neurosurgery: Spine.

“Being an ardent MJ fan, I was always fascinated with his dance moves,” explains co-author Manjul Tripathi. “As a child, I tried them several times but failed miserably, especially with the ‘forward bending’ of ‘Smooth Criminal.’ During my neurosurgical training, I again got interested in this mystery move and found the trick.” Yes, Jackson used a little stage trickery to accomplish his fancy footwork—more on that in a minute. “But even with the trick, the movement is difficult to execute,” Tripathi says. So he decided to investigate the biomechanics behind such a movement.

As it turns out, the anti-gravity tilt is physiologically impossible. To understand why, stand up again—here comes some more audience participation.

When humans want to lean forward, we bend at the waist. In addition to having better flexibility, bending at the waist allows you to use your erector spinae muscles to, as the study authors put it, “act like cables to support the suspended spinal column.” This bundle of muscles runs from your hip to your neck and is responsible for straightening and rotating your back. By maintaining your center of gravity, they keep you balanced. Go ahead and try it: bend at the waist and notice how easy it is to keep your back straight and yet remain upright.

Trying to bend at the ankles thwarts this whole process. Your erector spinae muscles are certainly keeping your back straight as you lean precipitously forward, but they’re not involved in the actual movement anymore. The authors explain that the strain of the lean has now shifted to the Achilles tendon in the heel, which was never designed to hold your whole body.

This is why most humans can only tilt forward Michael Jackson-style to the tune of about 20 degrees, though the authors say trained dancers could reach 25 or even 30 degrees. To get all the way to a 45-degree angle, you have to cheat.

In the video, Jackson achieved his miraculous lean using wires that supported some of his weight and kept him balanced. But when it came time to go on tour, he wanted to be able to perform the feat live. And for that, he needed some new shoes. Specifically, he needed the shoes outlined in U.S. Patent 5255452 A (on which Jackson is a co-inventor) which have a slot in the heel that conveniently locks in a peg raised from a dance floor. This peg secured Jackson to the ground as he tilted, and then stage technicians could retract it before he lifted his feet again.

But the authors think that even with the special shoes, the move would have required “athletic core strength” to pull off. They note that moves like Jackson’s give dancers all kinds of unusual injuries that neurosurgeons like themselves must later fix. Though you might not usually think of neurosurgeons as sports medicine experts, Tripathi and his colleagues are the sort who operate on athletes with severe head trauma or spinal injuries. “Back problems” are not purely muscular; because your spine contains so many important nerves, it’s also a prime area for neurological damage. This is exactly what neurosurgeons who focus on sport injuries are trained to fix.

“The seemingly impossible dance movements of Michael Jackson have actually inspired the next generation of dancers to practice more difficult movements, which are putting lots of physical strain and stress on the musculoligamentous structure of the body,” Tripathi says.

Hip hop injuries are so prevalent that there are “b-baby” workshops designed to teach dance instructors how to introduce toddlers to break dancing safely. Yes. You read that correctly. The article in question notes that it “intends to emphasize the need to introduce breakin’ at the earliest age possible in hopes of inspiring dance educators to improve hip-hop dance education across the United States.”

Strange as it may seem to see “breakin'” in an academic journal, they’re not wrong. Studies have consistently found high rates of injuries amongst break dancers, including slipped spinal discs. Break dancing is the second most researched kind of dancing, according to a meta analysis, just behind ballet. Whereas dancers in more traditional genres typically have more upper extremity injuries, break dancing and other modern types have far more lower extremity and back injuries.

Tripathi says he regularly sees dancers with spine injuries ranging from tendon tears to muscle ruptures to prolapsed discs and fractured cervical vertebra. Some only need physiotherapy, but others require surgery from experts like him. He says between dancers pushing themselves to outperform their peers and the unusual rotational forces at play in their bodies, it’s becoming increasingly difficult to treat these injuries, especially when dancers keep going back to their craft. Repeat stressors and constant strain mean that neurosurgeons have to keep fixing the same body parts as they get increasingly broken.

So if you, like these authors, strain your back while attempting to copy Michael Jackson, please seek some kind of medical treatment sooner rather than later—and let the King of Pop keep his dance moves.