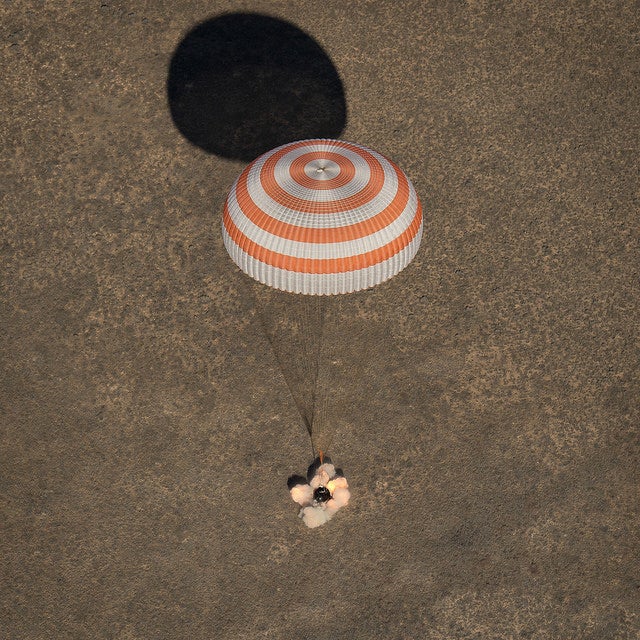 If space travel were gymnastics, we’d say that Expedition 50—which returned early Monday morning from the International Space Station (ISS), stuck the landing.

NASA astronaut Shane Kimbrough, along with Sergey Ryzhikov and Andrey Borisenko of the Russian space agency, were aboard when the Soyuz MS-02 capsule left the ISS a little after 3:00 am EDT on Monday April 10th. The trio were returning to Earth after spending 173 days in space.

While space agencies have gotten much better at landings since the early days of spaceflight, the capsule touched down so perfectly at 7:20 am in Kazakhstan that NASA spokesperson Rob Navias called it “a textbook landing” during live NASA TV commentary.

The Soyuz spacecraft uses a total of four parachutes that are deployed 15 minutes before landing to slow its decent. Pilot parachutes are the first to be released, followed by a drogue chute that slows the descent from 755 feet per second to 262 feet per second.

Next up is the main chute, the craft’s largest, with a surface area spanning 10,764 square feet—roughly 20 percent smaller than the area of an Olympic swimming pool. The main shoot slows the Soyuz’s descent to 24 feet per second. But that’s still not quite slow enough for a smooth landing, so the landing engines take care of the rest.

One second before touchdown, two sets of three small engines fire from the bottom of the module, cushioning the landing.

It takes a lot of work to make a landing look this effortless.