Could These Cauliflower-Like Shapes On Mars Have Been Sculpted By Microbes? 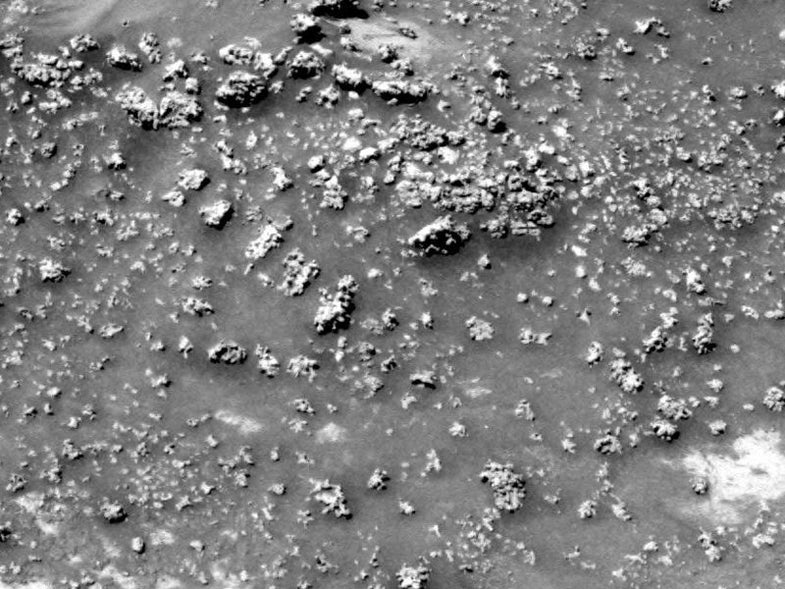 In 2008, the Spirit rover came across some bumpy terrain in the Gusev crater region of Mars. Now, as Sarah Scoles reports for Smithsonian, scientists want to look into whether those little bumps were carved by ancient Martian microbes.

The nodules bear some resemblance to cauliflower, but they wouldn’t taste very good–they’re actually made out of a type of glassy mineral called opaline silica. Although scientists can’t say for sure how they formed on Mars, planetary geologist Steven Ruff and geobiologist Jack Farmer recently announced that they’ve found similar features on Earth, which they think were built by microbes.

Previously, scientists thought the Mars bumps might have been carved out of the rock layer by acidic geothermal processes, back when the region was an active hot spring a few billion years ago. Then, in 2011, Ruff and Farmer and their colleagues found that the area was likely alkaline or neutral, which contradicts the acid hypothesis.

The nodules remained pretty mysterious for a few years, but then the team found similar structures in the Atacama Desert in Chile. With its dryness and temperature extremes, and even reddish-hued soil, the Atacama is the closest thing we have to Mars on Earth.

Ruff and Farmer found the “micro-digitate silica structures” in a geyser field known as El Tatio, and similar features have been found near Yellowstone’s hot springs as well as in New Zealand’s Taupo volcanic zone.

The two scientists have hypothesized that the Atacama structures are the remains of bacterial activity, and they’re looking for microbial biosignatures. If those biosignatures turn up, it could make Gusev crater area a prime target to look for evidence of past life on Mars.

But don’t expect a clear answer anytime soon. The fact that Ruff and Farmer can’t say for sure whether the Atacama rock formations on Earth were sculpted by microbes just goes to show how hard it is to find fossil imprints of ancient microorganisms–and presumably the job will be even harder on another planet.