We ate the world’s spiciest chip, cried for 45 minutes, then wrote this article about it 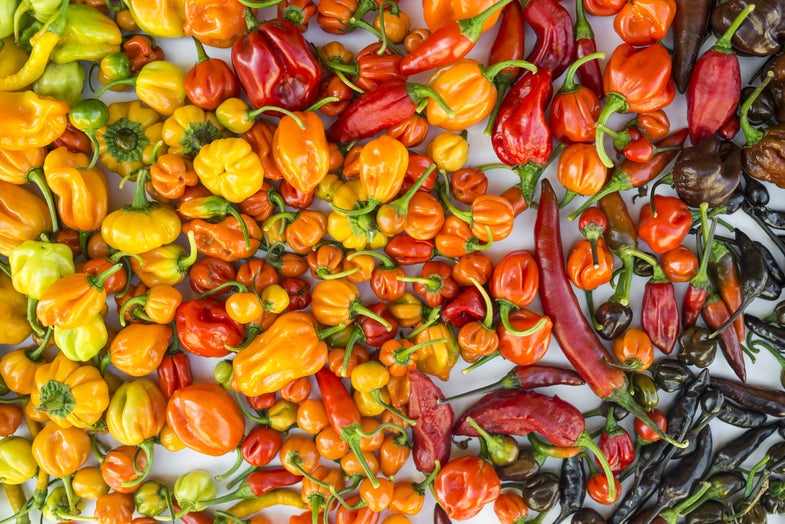 Once upon a time, Tabasco sauce was considered spicy and a jalapeno hit the upper threshold of heat for the American palate. But that was before 2007, when the Bhut jolokia—an Indian chili better known as the ghost pepper—became the first to top a million Scolville Heat Units (SHU), the measure of spicy pain. While your typical sweet pepper weighs in at zero on the Scolville scale, the ghost pepper’s 1 million SHUS make it 125 times hotter than your hottest jalapeno; between 200 and 400 times hotter than Tabasco sauce.

If the thought of chowing down on a pepper that spicy gives you heartburn, the Austin, Texas based tortilla chip company Paqui (rhymes with hockey) has what can only be described as a delicious form of torture in store for you. Their Carolina Reaper Madness Tortilla Chip is a savory mix of not one, but two of the world’s hottest peppers. It combines the aforementioned ghost pepper with the even hotter variety for which the chip gets its name; the Carolina Reaper. Chipotle pepper powder (which is essentially a dried and aged jalapeno pepper) is added for additional flavor. So for that very brief moment before the heat actually kicks in, your torture tortilla chip is pretty tasty. The company claims that it is the hottest tortilla chip in the world.

Having eaten it, I can honestly say that if it’s not the world’s hottest tortilla chip, I’m afraid of the chip that beats it.

“The reapers are much hotter now,” says Ed Currie, founder of the Puckerbutt Pepper Company and the creator of the Carolina Reaper. Currie supplied the reapers used in the chip. “We’re being recertified at Guinness World Records right now with an average of 1.922 million instead of 1.569 million SHU. The peppers themselves are coming in about a fifth hotter to a third hotter.”

And turning the pepper into a powder doesn’t weaken the heat. It actually concentrates it: you’re losing all of that water. What this means is that even if you’ve eaten the Carolina Reaper Madness Tortilla Chip in the past—this is the second year the company has offered this limited-edition chip—this year’s version should be even hotter. It’s no wonder the company sells single chips instead of a bag, packing the daunting snack in a box that looks like a coffin. It reads like a marketing gimmick, but it’s a gimmick designed to save us from ourselves.

While the burning in my mouth had pretty much abated within an hour of chomping the chip, I could still feel its presence several hours later. I could practically track the progress of my digestion through the (not totally unpleasant) burning sensation of the chip winding its way through my intestines.

“That’s one of the things with the Carolina reaper,” says Currie. “It doesn’t go away for a long, long time. And every time you think it’s gone away, you have a drink of something or you start moving around, your body just reactivates and all that heat is back again.”

Capsaicin creates a burning sensation by exciting the body’s TRPV1 receptors, sensors that are ordinarily responsible for sensing actual heat. But TRPV1 receptors aren’t just located in our mouths—they’re located in our intestines too. When they’re excited by capsaicin, they can speed up the rate at which food moves through our bowels. That leaves the body with less time to break down the capsaicin culprit. There are TRPV1 receptors in the anus too, which means eating a heavy dose of capsaicin can, for some people, cause a burning sensation on both ends of the equation. Why would anyone sign up for such a fate? It may have something to do with a human quirk called “benign masochism,” which we explain in the video, above.

My Popular Science coworker Billy Cadden, who also sampled a Carolina Reaper Madness chip, says that for him it burned the whole way down—albeit less upon exit than on entrance. I was lucky enough not suffer any scatological side-effects, but it’s not clear why I was spared this final kick.

If all of this seems like madness, Ed’s kids are probably laughing at you.

“My four-year-old and my five-year-old will grab something that’s definitely hotter than what most people can tolerate, like a Carolina Reaper, and they will eat it,” says Currie. “And as soon as their nose starts running or they start crying they’ll go, ‘oh, I need ice cream.’ Their motivation is not that they want the hot. It’s that they want ice cream instead of finishing their dinner.”

What most of us see as a bowel-threatening challenge, his kids just see as a means to a cold, creamy end.