Virgin Galactic’s SpaceShipTwo glides back into the space race 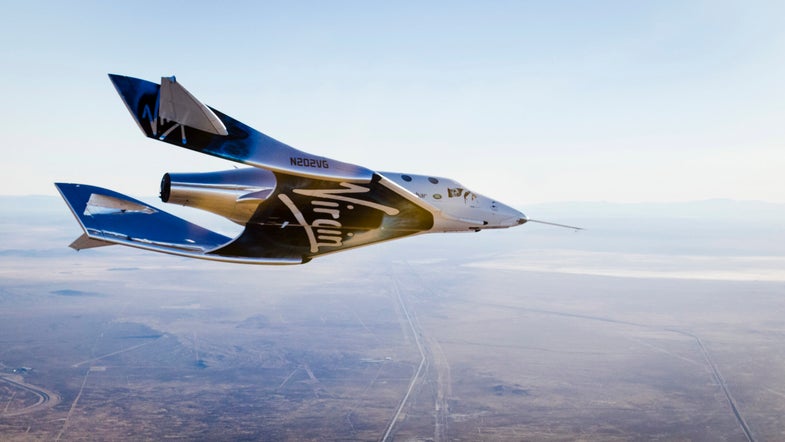 Virgin Galactic is working its way back to space. The private spaceflight company, built by billionaire Richard Branson, is premised on an odd sort of lux populism: tourist trips to outer space are expensive, but with a reusable spacecraft, a short, four-minute hop beyond Earth’s atmosphere is within the reach of a larger pool of the super-rich. Provided, of course, that the spaceship works, and that customers feel safe enough to put down $250,000 for four minutes in the heavens.

On Saturday, the VSS Unity successfully completed its first glide test. The new SpaceShipTwo is Virgin’s first craft since a tragic and fatal crash in 2014. Last month, Unity‘s flight tests began, but high winds meant the spacecraft never detached from its mothership, instead clinging to the underbelly of WhiteKnightTwo until back on solid ground.

Saturday’s flight had better luck. Pilots Mark Stucky and Dave Mackay piloted SpaceShipTwo on a slow glide down to Earth. Released from WhiteKnightTwo at an altitude of 50,000 feet, the glider barely exceeded half the speed of sound, and was safely on the ground 10 minutes after release from the mothership. Later on, after much more glide testing, the company hopes to try the spaceship on a powered flight.

Unity didn’t go into space on this test, but making sure the craft handles well in the atmosphere, without any engine power, is a key part of making sure it works like it’s supposed to. The 2014 crash was caused by an error at lower speed and lower altitude than the ship was designed for overwhelmed the craft.

Branson gushed about Saturday’s flight in a blogpost:

A successful, unpowered test at low speeds is just part of the long process of restoring the space tourism company to its pre-crash status quo. When it’s ready, there’s a spaceport in southern New Mexico waiting to host the craft.

Watch a short video about the glide below: