We finally know how durian got so stinky

It's one funky fruit. 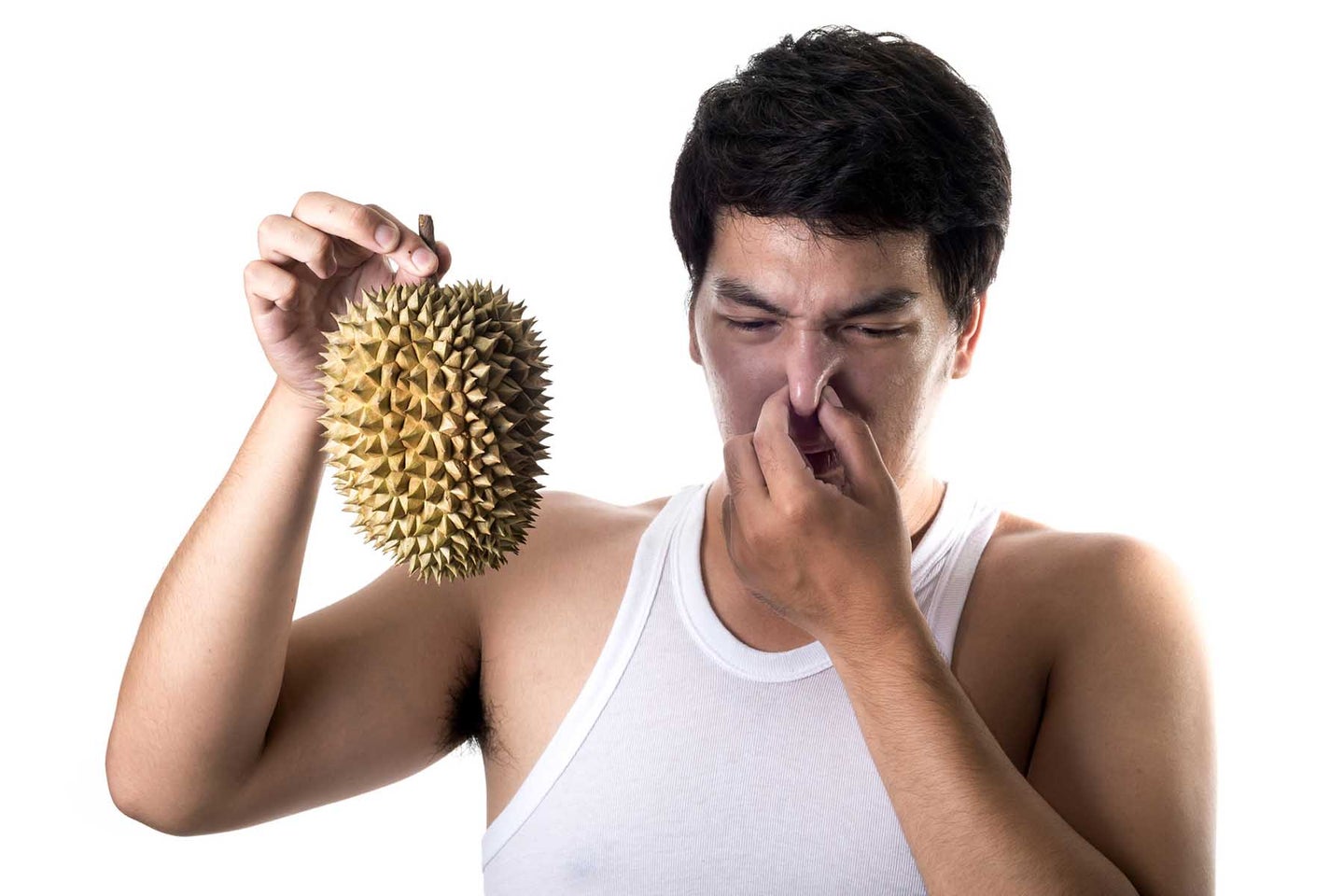 Durian, best known in the United States as a fruit so stinky it caused the normally unflappable Andrew Zimmern of Bizarre Foods fame to gag, has an unexpected (though arguably as pungent) cousin. In a study published today in Nature Genetics, researchers sequenced durian’s genome to reveal not only the source of its distinctive stench, but also the fact that it shares family ties with cacao—the plant that gives us fragrant joy in the form of chocolate.

“Now that we have the genome sequence of durian, we can compare them to different plant sequences that are in the public domain,” says study author Patrick Tan a biomedical researcher at Singapore’s Dune-NUS Medical School. “A number of interesting features came up. We found that durian’s closest earliest ancestor is the cacao plant.”

Once you know that cacao and durian share an ancestry, the similarities can’t be unseen: on the inside, the two fruits do look a lot alike. But it wasn’t a sneaking suspicion about the durian lineage that drove Tan, along with his colleague Bin Tean Teh, to sequence the fruit’s genome. It was love.

“Durian fascinates people in this part of the world,” says Tean Teh. “We love durian. And, coupled with our scientific curiosity, we felt that it would be great to look at it. We wanted to be able to answer some of the obvious questions regarding this fruit, for example its strong smell.”

Tean Teh and Tan leveraged three different genetic sequencing techniques, which together allowed the researchers to assemble the genome like a puzzle. One technique called Illumina short reads sequencing is kind of like taking a picture in your phone’s panorama mode. Just as your device can stitch together a series of photos to create one long image, this technique takes short snippets of DNA and links them up to tell the whole story. This allows researchers to identify tiny variations at the basic levels of DNA, and get some fairly detailed information.

The problem is that short reads don’t necessarily let us know how the big picture should be assembled (what researchers call building the DNA scaffold). This is especially true in the case of DNA that’s very repetitive—think of it as a puzzle with lots of pieces in the same color. The order still matters, but without the clues you get from color variation it can be hard to know which piece of sky goes where. And durian, as it turns out, has a lot of the same puzzle pieces: according to the new study it has 46,000 genes—roughly twice the number found in human DNA—that are mostly just repeats of a smaller original set. So the researchers turned to long reads sequencing, which allows researchers to see bigger pieces of the DNA scaffold to guide the order of their short bits. Finally, they used a third technique known as Hi-C to show them how to properly line up all the scaffolds they assembled.

Cacao wasn’t durian’s only kin—they also found cotton to be a close neighbor—but the relationship between these fragrant fruits proved especially close. But in the time they’ve been separated, durian has been awfully busy.

“When we compared the genome sequence of durian to earlier ancestors like the cacao plant, what we found is that durian has experienced a whole genome duplication event,” says Tan. Basically, durian took the genes it once shared with the cacao plant and photocopied them, incorporating the identical set into its DNA.

Whole genome duplication such as these essentially allow the original set of genes to continue carrying out their intended functions, while leaving a second set free to evolve and develop into different traits—like durian’s spiked outer shell and pungent smell.

“It’s almost like you cloned yourself, and you have one copy of yourself go and do the housework and cleaning and so forth so the other one can go on and do all sorts of different things,” says Tan. There are probably things you’d want to spend time mastering if you were suddenly free from the burdens of school, chores, and work. Maybe you’d learn how to play guitar or spend hours working out each day. The durian did just that, but with, you know, stinkiness.

Durian has worked hard to get its funk: aside from that whole genome duplication event, it’s made multiple additional copies of the genes responsible for creating sulfuric compounds—the one that give durian its distinctive parfum. “So, it’s a double whammy,” says Tan. In short, durian stinks so much because a lot of its genes are focused on pumping out odors. Inspiring.

The whole fruit system is optimized to produce the smell, likely to attract primates like orangutan to eat and disperse its seeds. But orangutans aren’t the only primate that the fruit attracts; the export market of durian is now upwards of $800 million a year, which is nothing to sniff at.

The researchers hope that understanding the genome might help agronomists breed a better durian. The fruit is so high in sugar that people with diabetes are warned to limit their intake, so a low-sugar variety would be great news to folks who crave its custard-like texture. In the meantime, it’s enough for many of us to finally understand what gives durian it’s distinctive scent (I think it smells like sewer water with a hint of gasoline). But durian’s evolutionary eccentricities unfortunately do nothing to explain why it’s so polarizing. While working on this piece, I offered to bring some durian into the Popular Science offices. My coworkers unanimously—and enthusiastically—declined.