We have better ways to fight the pandemic. 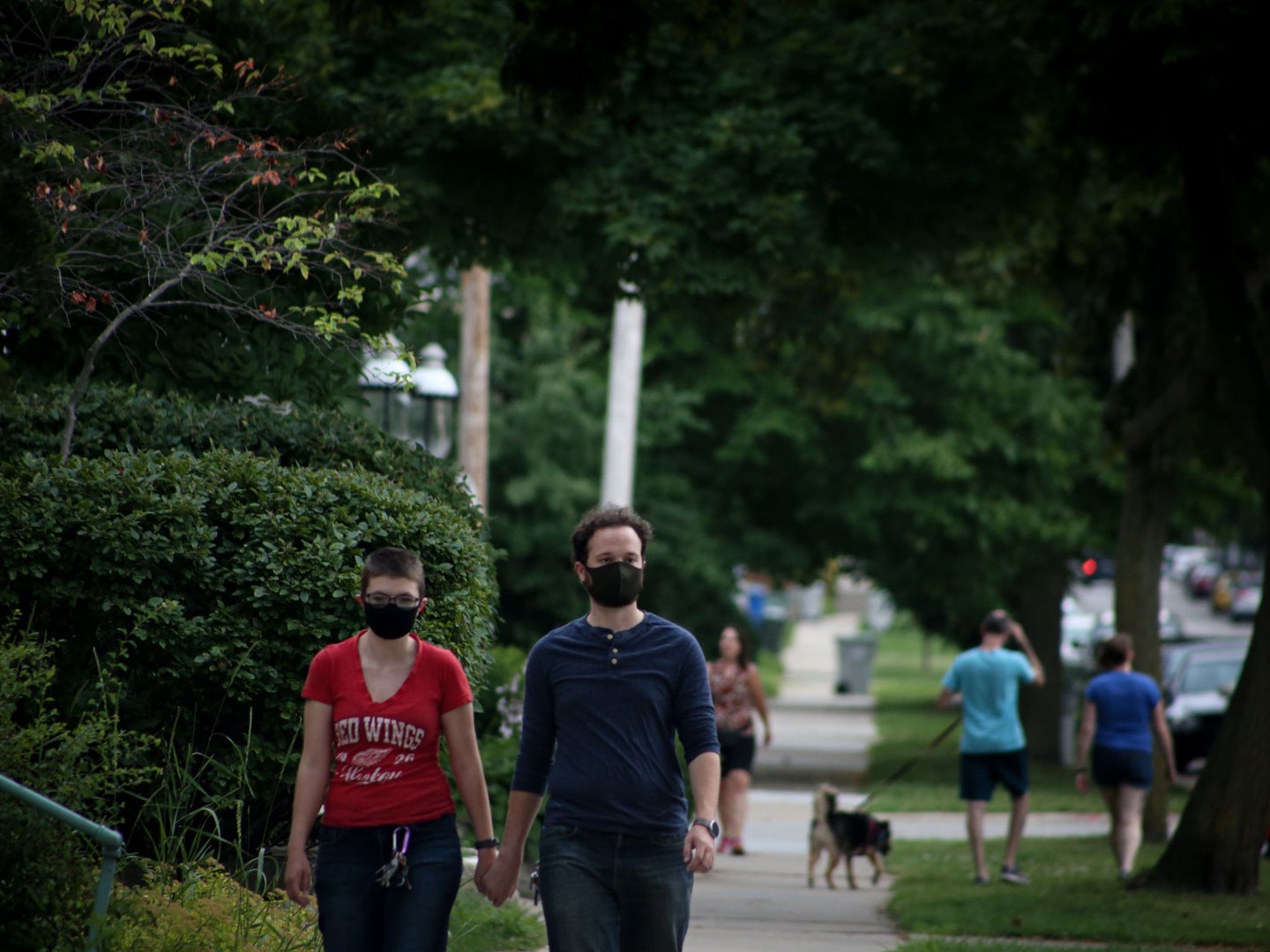 Herd immunity is the point at which enough people in a population are immune to a disease—whether because they have already recovered from infection or been vaccinated—that the pathogen cannot easily spread through the community and cause new outbreaks. Unsplash
SHARE

One of the White House’s top medical advisors has recommended that the administration adopt an approach to handling the pandemic that would allow the novel coronavirus to quickly infect massive numbers of people in hopes of reaching herd immunity, The Washington Post reported on August 31. The plan, reportedly advocated by Scott Atlas, a neuroradiologist at Stanford University’s Hoover Institution, has drawn swift criticism from infectious disease experts.

“We’re talking about something that…basically would be relying upon an outbreak that would lead to the deaths of hundreds of thousands of Americans,” says William Hanage, an epidemiologist in the Center for Communicable Disease Dynamics at the Harvard T.H. Chan School of Public Health. “The numbers of people who would be rendered vulnerable to this are surely larger than anybody should be prepared to accept.”

Herd immunity is the point at which enough people in a population are immune to a disease—whether because they have already recovered from infection or been vaccinated—that the pathogen cannot easily spread through the community and cause new outbreaks. Trying to achieve herd immunity without a vaccine’s help, as Atlas is proposing (though he later denied that he pushed for this measure after The Post’s story was published), would entail lifting social distancing restrictions on businesses and gatherings so the disease could spread among young, healthy people. Meanwhile, other steps would be put in place to protect particularly vulnerable populations. However, the course of action would put truly staggering numbers of people across all age groups at risk of serious illness and death.

There’s also no evidence that a single sweep of the virus through the population would lead to herd immunity, says Sten Vermund, dean of the Yale School of Public Health.

“It’s a complete myth that you can just let the epidemic rage, protect the vulnerable, and achieve herd immunity. What may happen is…you fill the hospitals, you fill the morgues, and then the next year it happens again,” he says. “You’re not going to get enough people infected to achieve herd immunity and therefore you’ll have done it all for nothing.”

Typically, herd immunity is reached when the majority of people in a population are vaccinated. This threshold varies depending on the disease; about 95 percent of a population must be vaccinated to control an extraordinarily contagious disease like measles. It’s not certain yet what proportion of the population would have to be immune to COVID-19 to prevent the disease from spreading, Hanage says. He estimates that roughly 50 to 66 percent of the population would have to catch COVID-19 to reach herd immunity without a vaccine.

There have been more than 6 million confirmed cases of COVID-19 in the United States and more than 184,000 deaths. For a country with a population of about 330 million people, this means that herd immunity is still a very long ways off. Even cities that were struck hard at the beginning of the pandemic, such as New York, haven’t reached that point. There may be tiny pockets where enough people have been infected that their family members or neighbors are unlikely to catch the disease, Hanage says. But that doesn’t prevent these people from becoming infected when they venture beyond their homes or city blocks.

Sweden, a country that imposed only minimal restrictions at the start of the pandemic, similar in some ways to what Atlas is advising, has also not reached herd immunity. Meanwhile, the number of COVID-19 fatalities per million people is much higher in Sweden than in neighboring countries such as Denmark or Norway.

“Sweden is one of the most medically privileged and healthcare privileged nations on the planet,” Vermund says. The United States has high rates of heart disease and other conditions that put people at higher risk of becoming seriously ill should they catch COVID-19. Many people in the U.S. face other inequities, including lack of access to health insurance and living in areas high in air pollution, that compound their risks. In Sweden, Vermund says, “You don’t have the profound subpopulation of vulnerable individuals that we do in the U.S., so it would have been even worse in the U.S. if we had simply let the epidemic rage.”

If the United States actively pursued a herd immunity strategy, many of these vulnerable populations would bear the brunt of the epidemic. “Some of the people who have been most infected in the first surges of this have been people of relatively low socioeconomic status, people who are living in communities or in very crowded settings where it’s difficult for them to socially distance,” Hanage says.

Recent data released by New York City’s Department of Healthfound that, across the five boroughs, around 27 percent of those tested had antibodies to the novel coronavirus. The one zip code where more than 50 percent of participants tested positive for antibodies was Corona, a predominantly Hispanic neighborhood in Queens where many residents are construction and restaurant workers who could not work remotely during the pandemic, The New York Times reported on August 19.

“A higher proportion of those people who are already vulnerable for other reasons would need to be immune in order to achieve herd immunity for the community,” Hanage says. “That’s disturbing in various ways because it means that you are almost desirous of infection within those groups.”

COVID-19 also poses a particular risk to older people, and shielding the entire elderly population from infection probably wouldn’t be possible. “It’s really, really hard to keep it within those people who are at minimal risk,” Hanage says.

Many elderly people live in multigenerational households or nursing homes, raising their risk of exposure to the novel coronavirus. People in long-term care facilities account for about 40 percent of deaths related to COVID-19 in the United States. Back in February, an outbreak of the disease killed 43 people in a nursing home in Kirkland, Washington. “That was an early warning sign and all of the nursing homes were aware that they might be in trouble,” Vermund says. “And yet we still had astronomical death rates; we still did not succeed in keeping the virus out of the nursing homes.”

Another problem with allowing COVID-19 to spread rampantly is that while the risk of serious illness or death is far lower among young adults or otherwise healthy people, Hanage says, “It’s also not nil.” Researchers also worry that even people with mild cases of COVID-19 may experience lingering health problems from the disease. And allowing COVID-19 to run rampant in young people could mean that the disease becomes so prevalent that elective surgeries and medical appointments must be canceled because the risk of transmission is so great, Hanage says.

There have been several cases where people have been infected with COVID-19 a second time, although the implications for herd immunity—such as how common reinfection might be and how contagious people are during their second bout of COVID-19—are not yet clear.

Regardless, allowing COVID-19 to spread like wildfire is not a viable option. “What we need for herd immunity is a vaccine,” Vermund says. Until one becomes available, we have plenty of ways to minimize the spread of COVID-19, including masks, social distancing, spending time outdoors when possible and improving ventilation indoors, and avoiding large groups.

“Those are classic respiratory disease control measures and that’s what we have to rely on over the next year,” Vermund says.

There are also new advances such as screening tests that can return results within an hour or are inexpensive enough to allow us to track COVID-19 on a much larger scale than has previously been possible in the United States.

“You can minimize exposure [to COVID-19], minimize risk, and equally get a reasonable amount of things back to, not normal, but closer to normal,” Hanage says. “We’re still not in a great place, but there are things that we can do to improve matters and to keep us going through the months ahead.”