A glossary to get you through this epidemic—or is it a pandemic? 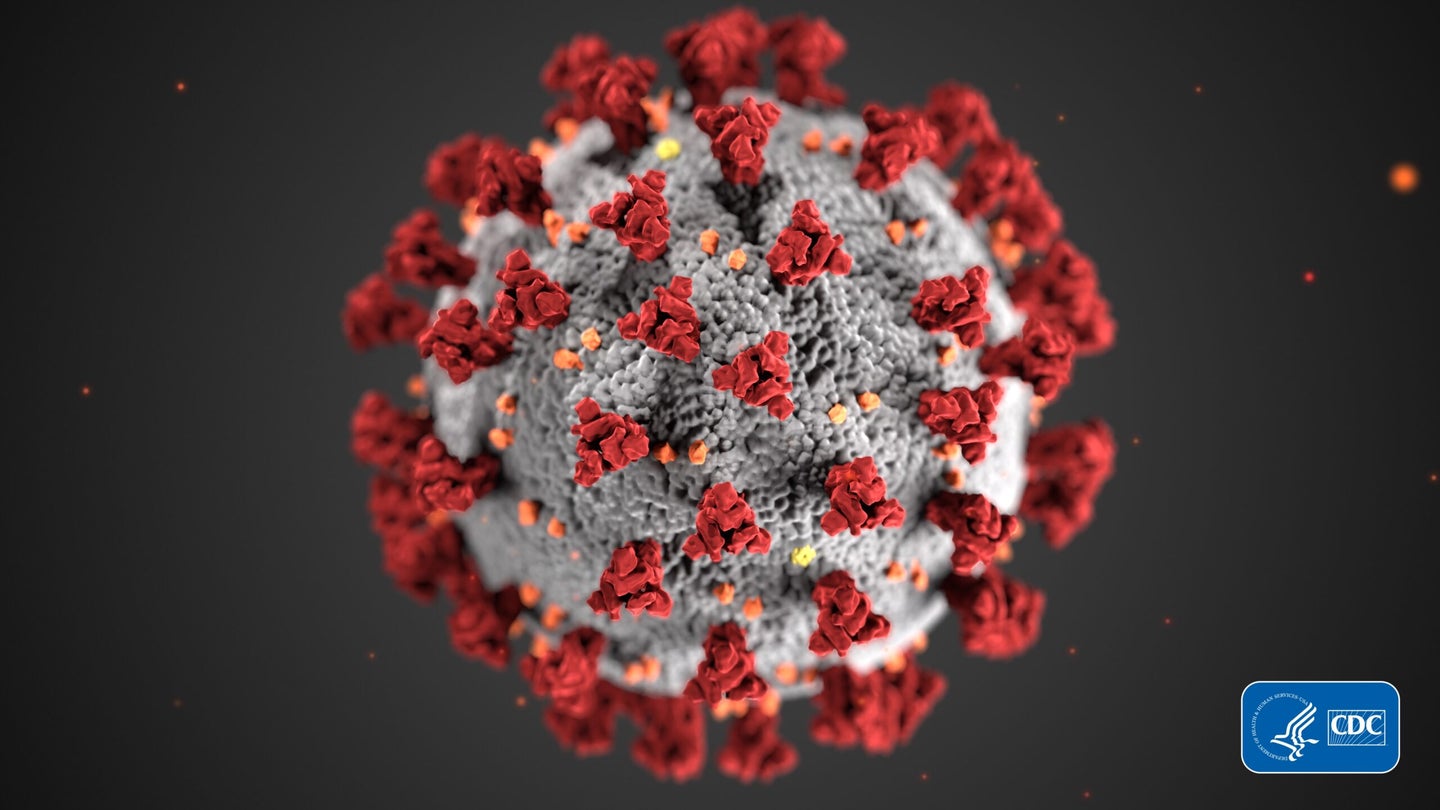 The news about coronavirus is whirling faster than most people can keep up, and with the constant updates come a slew of terms being bandied about as if everyone is already familiar with them. We gathered a bunch of those words and phrases and broke them down for you here in our handy COVID-19 glossary—and don’t worry, we define that one for you, too.

A person who doesn’t show symptoms after contracting a virus might think they’re scot-free, but in reality, they can be just as infectious as someone who gets sick. Asymptomatic patients often carry the same amounts of a pathogen as symptomatic ones, and have a higher capacity for spreading, given that they don’t know to take precautions. Some might even come down with low- or high-grade symptoms days or weeks after initially being infected. Lab studies show that up to half of the people who test positive for COVID-19 may be asymptomatic, which could explain why the pandemic escalated so quickly after hitting Wuhan, China.

Small respiratory droplets that clock in at less than 5 micrometers of diameter are considered aerosolized. These liquid particles spread farther through the air after leaving a person’s nose or mouth than do larger drops, but they also dry up quickly. Studies have shown that the virus behind COVID-19 can spread rapidly through aerosolized droplets, which is why the Centers for Disease Control and Prevention now recommends everyone wear a mask out in public and remain six feet away non-household members.

When the body’s immune system is attacked by a bacteria or virus, it produces proteins that bind specifically to those pathogens, helping it to protect it from future infections, too. In cases of COVID-19, medical professionals are collecting blood plasma from patients who’ve recovered from the disease for a full two weeks in the hopes that the antibodies can help much sicker individuals. It’s not clear yet how long these antibodies might confer immunity, though, or how many you’d need to be protected from the novel coronavirus.

These unique proteins are found on the surfaces of viruses and bacterium. When the body detects them, it prompts the immune system to create antibodies, which then bind to the antigens to destroy the infecting molecules. Some COVID-19 tests look for hints of the proteins to determine if a person has picked up the disease or not.

Governments use a variety of methods—personal interviews, phone location data, etc.—to determine who an infected individual may have had contact with, both before and after being diagnosed with disease. They can then work through that chain of interactions to warn others to get tested, tip off vulnerable communities, and in general, map the spread of a virus. Many U.S. states are currently hiring contact tracers to help manage COVID-19 as facilities reopen.

Though lots of folks are calling the disease “coronavirus,” this is actually a general term for a family of viruses that can cause everything from the common cold to SARS and MERS. This new strain, or novel coronavirus (nCoV) is one that hasn’t been identified in humans previously. All coronaviruses originally came from animals (SARS from civet cats, MERS from camels), which is why they can emerge so unexpectedly.

The upper respiratory disease that the novel coronavirus causes, so named because it’s a COronaVIrus Disease that appeared in 2019.

As an outbreak spreads, public health officials track cases based on where they originated. Cases can enter a country via travel, where a person has come from an area known to have the disease and brought it to a new place, or they can be community spread, meaning a person who got it from an outbreak area has passed it to someone else in their community. In a lot of ways community spread is worse—it indicates that the virus is now moving within a new area that didn’t previously have the disease.

You might think there’s a technical definition of this term, but epidemics are all relative—it just means an increase in the number of cases you’d expect to see in a given area at any particular kind. For something like the common cold, for instance, thousands of cases in one state or country are to be expected. But if a disease that usually only affects four or five people a month is infecting thousands, that’s an epidemic.

The idea of implementing preventative, social-distancing measures in order to spread out the number of people who are sick at one time. Without measures, many people get sick all at once, leading to a tall, narrow curve. With them, you can flatten the curve—just as many people may get sick overall, but they’ll be spread out over time. For a healthcare system, especially an overwhelmed one, it’s far better to have a million people sick over the course of a year than that same million sick in three months.

After a pathogen passes through the majority of a population, many members gain some level of immunity against future outbreaks and infection. Once this happens across 70 to 90 percent of the population (depending on the specific virus), it greatly reduces the disease’s ability to spread, but still leaves weaker individuals exposed. Vaccines are critical in achieving herd immunity long-term, as seen with polio and chicken pox—and the whole concept becomes even more difficult if the virus mutates over time, like with the flu.

An anti-malarial drug that was briefly investigated for its potential to prevent or treat COVID-19. In clinical trials, however, researchers found that the medication causes some potentially serious side effects—like kidney injuries, liver failure, and dangerous heart rhythms—in addition to not providing relief from the virus.

A pandemic is just a bigger epidemic—one that has spread over several countries or even over continents—but not everyone uses it the same. There’s no hard or fast rules about what exactly constitutes a pandemic. The World Health Organization reserves the term for “the worldwide spread of a new disease,” not just a few countries, and as of March 11 have officially designated COVID-19 as a pandemic.

Activities that require minimal use of facilities and interaction between people fall within this category. Examples include hiking, biking, running, hunting, fishing, golfing, and playing tennis. Many states have reopened parks to allow for passive recreation during the pandemic.

The so-called “R naught” or “R zero” value of an illness is the average number of people who will get infected from a single sick person. A high value indicates that a disease is very infectious, meaning one person will get lots of others sick. Values closer to one are less infectious, and anything under one will peter out quickly. Coronavirus’ reproductive number is somewhere around 2.5 or so, which is right around what it was for SARS but higher than what we see for seasonal influenza.

Originally an ebola treatment, remdesivir seems to be the only drug thus far that has shown any promise for treating COVID-19. The drug is a general antiviral that seems to interfere with a virus’ ability to replicate. It’s only shown moderate promise in treating the novel coronavirus—studies are limited, and while some show that patients have shorter recovery times, others show no effect—but given the limited toolbox we have for treating COVID it’s still the most promising candidate we have so far.

The name of the actual virus that causes the disease COVID-19. It stands for severe acute respiratory syndrome coronavirus 2. The numeral 2 is because the official viral name for the virus that caused the SARS outbreak in 2003 was called SARS-CoV, and this new virus is closely related.

Simply put, this practice involves putting physical space between you and any people you don’t live with to keep a virus from spreading in stealth. The best way to do so is by avoiding social activities and events. If you do find yourself in close quarters with another individual, either on the street or at your workplace, keeping six feet of space in between can help prevent aerosolized SARS-CoV-2 particles from being shared.

In many viral outbreaks, scientists have found that most cases of infections can be traced back to a few individuals. These people may be asymptomatic, have professions that require them to travel widely, be diagnosed with other diseases, or have a history that makes them otherwise more susceptible to spreading a pathogen. Typhoid Mary is one famous example.