Adenovirus is normally harmless—here’s why some outbreaks turn deadly

Here's what you need to know about the adenovirus. 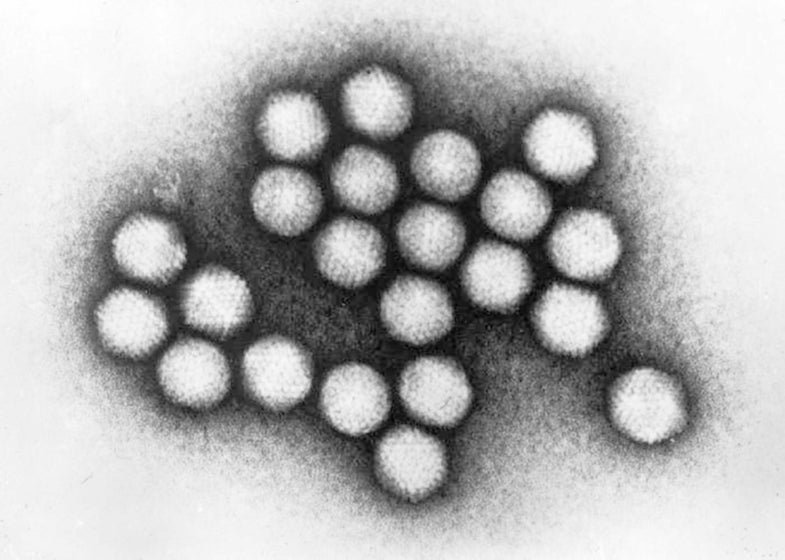 Adenoviruses are similar, structurally and in the way they affect the body, to the common cold's rhinovirus. They typically cause mild to severe cases of upper-respiratory illnesses, and occasionally they can also cause pneumonia, diarrhea, and pink-eye. CDC
SHARE

This past week, New Jersey State Health Officials reported the deaths of seven children, all residents of a rehabilitation center in the state’s town of Haskell. The cause of death was a variant of an adenovirus, an infectious virus that often causes symptoms similar to the rhinovirus, which causes the common cold. Rarely, though, a strain can be far more severe, as it has been in this case.

The children were all living fulltime in a nursing home and were, as the report details, among the most medically fragile at the facility. In total, there were 18 confirmed cases of the viral infection at the center. Why this particular strain of the virus turned so deadly is not entirely clear.

What is the adenovirus?

Adenoviruses are similar, structurally and in the way they affect the body, to the common cold’s rhinovirus. They typically cause mild to severe cases of upper-respiratory illnesses, and occasionally they can also cause pneumonia, diarrhea, and pink-eye. Everyone is susceptible to adenovirus infections, but, according to the New Jersey Department of Health and the Centers for Disease Control (CDC), most reported cases of the virus are in children, often in communal places like day camps, schools, and childcare centers.

Is it similar to the flu?

A mild infection with an adenovirus will likely cause more cold-like symptoms, but sometimes the infection is more severe, causing issues more similar to the flu, such as a fever and body aches.

There are other strains of the adenovirus—52 in total—that cause gastrointestinal illnesses as well as ones that cause conjunctivitis, or pink eye.

Why was it so deadly in this case?

Most people, adults and children alike, recover quickly from adenovirus infections. However, people who have a compromised immune system, an existing respiratory infection, or certain heart conditions might be affected more severely. The children at the facility were all medically fragile, according to reports.

But regardless of how sick a person is before they are infected with the adenovirus, there are some strains that are simply more dangerous; they cause a worse immune response, meaning higher fevers, worse gastrointestinal issues, and so on. That could be the case in this most recent New Jersey outbreak. The children were also all living in close quarters, making it far easier for the virus to spread rapidly through the center.

Outbreaks like this are not entirely uncommon. According to the CDC, an outbreak of one adenovirus strain in 2006 and 2007 infected 140 people in four states across the country from New York to Oregon. According to The Washington Post, adenoviruses are also a problem in military camps and on bases. In fact, some military members are given an FDA-approved vaccine to prevent outbreaks.

While there’s no medication to treat adenoviruses, the symptoms are—usually—short and self-limiting, especially if a person is young and healthy. The people to watch out for are children and those with pre-existing conditions, like heart problems or compromised immune systems.

People can avoid infection by washing their hands regularly, and avoiding touching their face—especially their eyes, nose, and mouth—whenever possible. That’s one of the most common ways people get exposed to any infectious microbe.

And while we are on the topic of infectious diseases, now is the perfect time to get your flu shot, which will at least protect you from a few awful strains of the microbes you will likely encounter this winter.