Travel, sleep loss, and stress can all wreak havoc on our immune systems 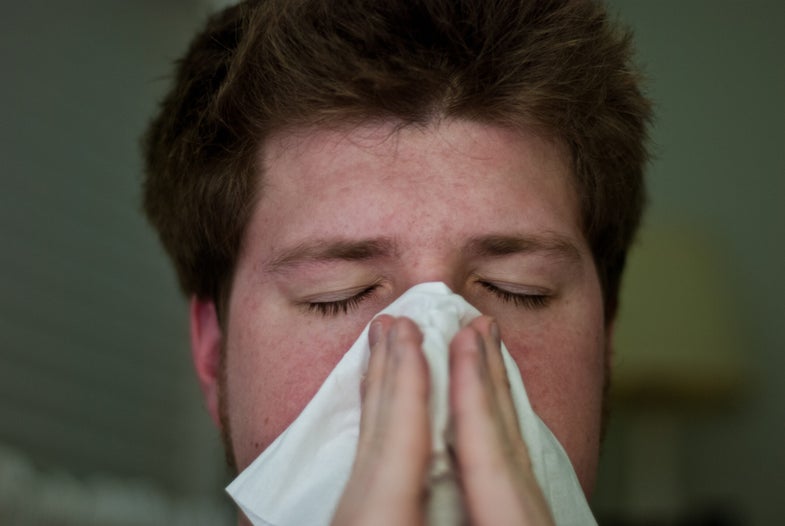 But it’s not just Clinton who’s been sick, subsequent reports suggest. People reported on Monday that multiple other members of her campaign team have also recently been struck with illnesses ranging from dehydration to respiratory infections.

The reason for the wave of sickness could be plain bad luck — but it’s also not out of the question that lots of traveling and long hours had a little something to do with it.

“I would imagine that being chronically sleep deprived and overworked and stressed would lower anyone’s resistance to infection,” said Christopher Sanford, an associate professor of family medicine and global health at the University of Washington.

In fact, travel in general may expose people to all kinds of conditions that could make them more susceptible to illness, whether or not they’re running for president of the United States.

“The things that put you at risk for infections are things that do one of two things,” said Catherine Forest, a family medicine doctor at Stanford Health Care. “They either increase your exposure to viruses and bacteria or parasites, or they increase your susceptibility to those things.”

According to Sanford, close proximity to other passengers while traveling can expose travelers to a variety of harmful bugs.

“Folks who go through jets and airports do have a little higher risk of infectious things, including head colds and influenza, and the reason is just exposure to more people,” Sanford said. “Just as people who work at daycares get head colds more often, people who go through crowds get coughed on more and are at slightly higher risk.”

And research appears to support this idea. One oft-cited 2002 study in the Journal of the American Medical Association, for instance, suggested that an average of 20 percent of plane passengers surveyed reported respiratory infections within five to seven days of flying.

Additionally, certain behaviors linked to being on the road can make us more vulnerable to infection. Losing sleep may be among the most common. Traveling overnight, crossing time zones or even just changing one’s schedule while on the go can all disrupt a traveler’s normal sleep patterns.

“I think you could say fairly that sleep deprivation will slightly weaken your immune system, could make you a little more prone to get things like a head cold,” Sanford said.

One 2009 study found that participants who reported getting less than seven hours of sleep per night over the course of a 14-day period were nearly three times more likely to fall ill when exposed to the common cold virus than those who got at least eight hours. And a 2015 study came to similar conclusions. Participants who reported getting less than six hours of sleep a night over the course of just one week were more than four times more likely to come down with the common cold than those who slept more than seven hours — and those who slept less than five hours were even more susceptible.

Flying across time zones can be especially hard on travelers, particularly when they’re traveling from west to east, said Akram Khan, a specialist in pulmonary diseases, sleep medicine and critical care at Oregon Health & Science University.

“There is this issue of traveling through multiple time zones that can increase the [body’s] level of stress, and it can change your circadian rhythm cycle,” Khan said.

Stress in general tends to weaken the immune system, he added. This means that rushing to catch flights and dealing with hectic travel schedules can also play a role in the body’s susceptibility to infection.

Luckily, there are plenty of steps travelers can take to protect themselves. Some of these are fairly standard, Sanford noted, like washing your hands regularly with soap and water.

“Getting a flu shot is a good idea,” he also suggested. And for people older than 65, there are now two pneumonia vaccines available as well.

Staying hydrated while traveling is another important way of bolstering the immune system, Khan said. Flying, in particular, tends to have a dehydrating effect on the body. And Forest added that people traveling by any means should remember to move their legs and stretch regularly, since sitting in one position for hours on end can increase the risk of blood clots.

And, of course, making an effort to keep a regular sleep schedule is critical. Experts generally recommend that people crossing time zones expose themselves to as much daylight as possible when they reach their destination, avoid sleeping during the day and go to bed early at night to get over their jet lag as quickly as possible. Khan added that bolstering the efforts with a little caffeine in the morning can help people who are having trouble adjusting, as well as taking a low dose of melatonin at night to help fall asleep.

In general, Forest said, maintaining good habits, such as hand-washing, staying hydrated, and getting adequate rest is key.

“When people come to me to ask about how to protect themselves for travel, one of the things I say is take good care of yourself, even more so than you might have if you weren’t traveling,” Forest said.