Viral Lessons From The Heartland

Researchers have revealed the Heartland Virus is Widespread in America 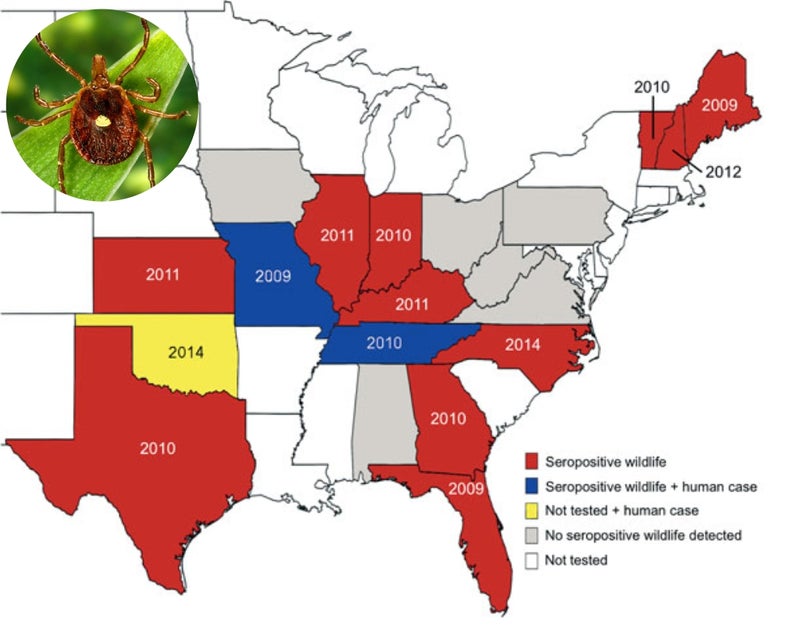 Back in 2009, during the influenza pandemic, two people in Missouri came down with an illness. At first, this was thought to be a new incarnation of the viral flu but further testing revealed it was something new and very different. Because of the geographical location of the area, this new pathogen was called the Heartland virus.

In the lab, the virus was studied and found to be a member of the Phlebovirus genus. Its name comes from the initial transmission vector, phlebotomine sandflies and within this genus are nine official species. The most studied is Rift Valley Fever. It is predominantly found in Africa although outbreaks have occurred in Saudi Arabia and Yemen. Another important member of this group is the Toscana virus, which has been seen in several European countries.

Phleboviruses mainly affect animals but they can infect humans. In most cases, the symptoms are mild and akin to the flu although more serious symptoms can occur depending on the species. Rift Valley Fever can attack the liver and the eyes while Toscana virus can cause meningitis.

No matter the extent of the symptoms, infection begins with entry into the human body, usually through the skin by a sand fly bite although mosquitoes and ticks can also be carriers. Once in the blood, the virus causes a combination of symptoms such as nausea, fever, fatigue, vomiting, abdominal pain, and diarrhea. Eventually, most people will clear the infection once the immune system figures out how to kill it. Because it can’t be transmitted from human to human, infections are usually isolated and do not cause outbreaks like the flu.

While the nature of the viral pathogen had been discovered, the route of infection and also the severity of symptoms could only be learned from the patients themselves. The source of infection was a tick as both had a history of an encounter with the embedded insect. The onset of symptoms was about four days and both required some form of hospitalization. No treatment was given – primarily because the doctors had no idea of the nature of the pathogen – and both recovered within four to six weeks. The virus appeared to be less life-threatening than its Rift Valley Fever and Toscana relatives.

By the end of the ordeal, the Heartland virus, although a striking new addition to the list of pathogens worldwide, was considered to be a negligible threat in light of the current pandemic situation. But, after the all clear on the influenza front was called, researchers went back to explore the virus, the habitat, and more importantly, the risk to humans for infection.

While the search continued, other Heartland infections were confirmed. They were still relatively low in number – six over the course of 2012-2013. Based on the analysis, the virus seemed to spread during the summer months and was always associated with ticks. As for its virulence, all patients recovered suggesting the virus, while interesting, was still not a significant threat.

But then in 2013, the virus proved it can kill. The patient was not in the best of health and had several chronic conditions suggesting he was at a higher risk for a rather virulent infection. Yet no one expected the virus would be fatal.

There was also another troublesome fact regarding the death although this had nothing to do with physiology but instead geography. Though the first cases were found in Missouri, this man died in Tennessee. This meant the virus wasn’t local but potentially widespread in the US. The focus on Heartland was ramped up to learn as much as possible about the virus and its environmental prevalence.

To assess the geographical distribution of the virus, researchers went on a hunt. But, finding the virus in ticks wasn’t easy so they used another route involving sentinels, animals known to be infected with human pathogens. The list of animals included raccoons, horses, deer, dogs, possums, and birds. All of these species could possibly become infected and develop antibodies to fight the invasion.

In the meantime, another infection occurred in Oklahoma and like the Tennessee case, ended tragically. The list of infections was now up to ten and the prevalence of the virus increased to yet another State. This suggested the range of the virus could be far larger than anticipated meaning any surveillance would have to be widespread and involve much of the continental United States.

Last week, the data finally came out although the results are anything but heartwarming. Based on the information attained, the virus appears to be widespread across the Central and Eastern United States from Texas all the way up to Maine.

The team analyzed a five-year collection of blood samples from deer, raccoons, coyotes, and moose from 19 different States. The samples were taken back to the lab and serum was collected. The now antibody-rich fluid was added to cultures of cells and then exposed to the Heartland virus. If antibodies were present, the virus would be neutralized and the cells would be safe. If there were no antibodies, the cells would become infected and die.

When the results came back, animals from Missouri and Tennessee came back positive for antibodies as did eleven other States – Florida, Georgia, Illinois, Indiana, Kansas, Kentucky, Maine, New Hampshire, North Carolina, Texas, and Vermont (Oklahoma had not been tested). The results revealed a wide swath of risk across the Eastern half of the country. Moreover, based on some of the data, the virus may have been circulating for many years before the first human outbreak. This wasn’t confirmed however as massive genetic analysis on origin had yet to be done.

The information on the Heartland virus has greatly increased over the last six years and research has provided valuable insights. However, when it comes to prevention, there is little we can do. With such a widespread distribution, there is really no way to control the virus or its spread. The best option is to limit exposure to ticks and prevent them from gaining access to the skin. Not only will it help to prevent the virus from infecting, it can also help to keep other tickborne diseases away such as Lyme disease, tularemia, and spotted fever.