All the ways you can—and can’t—catch the coronavirus

Little is known for sure, but sneezes are still the main thing you should watch out for 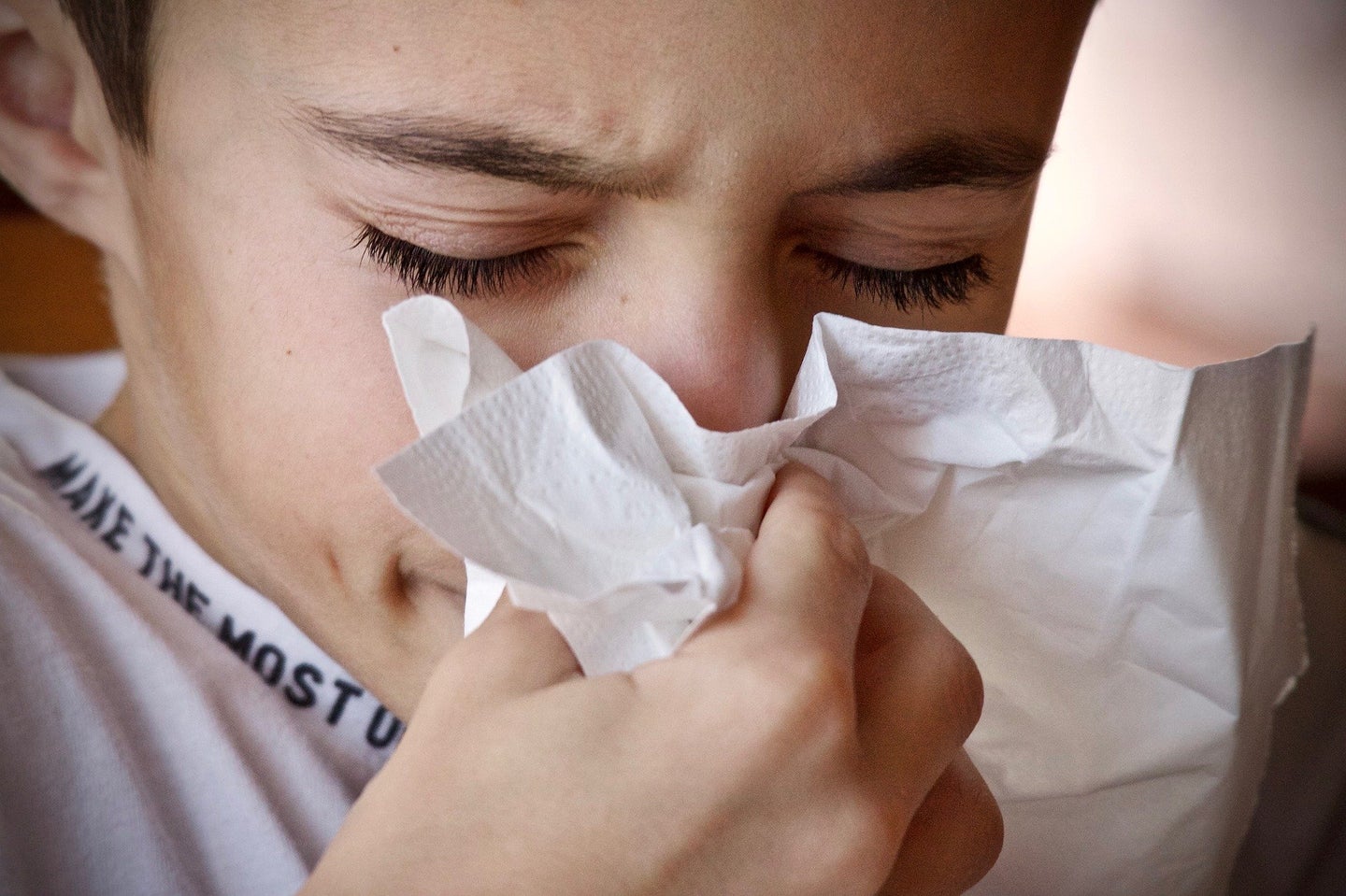 Where exactly the virus that causes COVID-19 came from is still something of a mystery. Experts believe that it jumped from an animal to people in the market in Wuhan, China where the outbreak began. But the exact animal species (some suspect it originated in bats, spread to pangolins, and then to people) hasn’t been determined yet.

Now that the virus has spread to humans, however, scientists are racing to identify all the other ways that people can—and cannot—catch it.

The new virus, officially known as SARS-CoV-2, is a member of the coronavirus family, a group that includes the viruses that caused deadly outbreaks of SARS and Middle East Respiratory Syndrome (MERS), as well as far less dangerous viruses that cause the common cold. These closely related viruses—and some preliminary studies of people with COVID-19—can give us some clues about how the new coronavirus might be transmitted. Coughs and sneezes should be your biggest concern, but there are a few other possible routes of transmission that scientists can’t rule out yet.

“We’re still on the learning curve and there is still much we don’t know,” Stephen Morse, a professor of epidemiology at the Columbia University Mailman School of Public Health, said in an email to Popular Science. “This is based on the best data we have as of now, but we may learn more.”

Here’s what we know so far.

The primary way that the new coronavirus spreads is when someone coughs or sneezes and sprays germ-filled droplets of mucus or saliva into the air. If you’re nearby, the secretions can land on your face or body, or you can breathe them in.

Generally these moist, infectious projectiles can travel up to 6 feet from the infected person, says Charles Chiu, associate director of the UCSF Clinical Microbiology Laboratory. This means you must be in fairly close proximity to a sick person to catch the virus. “It is extremely unlikely—and has never been documented—that you can get infected with the virus if you’re in the back of the airplane and a COVID-19-infected patient is in the front of the airplane,” he says.

You might pick up the virus from close contact with someone who is sick—by shaking hands, for example—but washing your hands often and thoroughly greatly reduces the likelihood of this happening.

It’s possible that you can also become infected by touching an object that has the virus on it, such as a doorknob, countertop, or the handle of the bathroom door on an airplane.

People often touch their faces hundreds of times a day, Chiu says, so it’s all too easy for someone to get the virus on their hands and then rub their eyes, nose, or mouth. This is also one of the reasons why you probably shouldn’t wear a facemask if you’re not sick or caring for someone with COVID-19.

“People don’t use the face masks correctly—they touch the outside of it, they take it off wrong, they rub their face below it, they scratch their nose, they lift it off their mouth for [a] moment to talk or get on the phone, they don’t dispose of it correctly,” says David Eisenman, director of the UCLA Center for Public Health and Disasters. “So in all of those ways they’re breaking the barrier basically, making it ineffective.”

Scientists don’t know yet how long this novel coronavirus can survive outside the human body. Based on what we know about other coronaviruses, it may persist on surfaces for a few hours or for several days. In any case, though, contact with infected surfaces is not thought to be the main way the virus is spread; you’re still much likelier to catch the virus if somebody coughs or sneezes on you.

The virus is not known to be airborne

Some pathogens can be spread through the air, including the measles and chickenpox viruses and the bacteria that cause tuberculosis. This airborne transmission is different from when people launch droplets into the air when they cough or sneeze. That’s because those tiny globs of mucus or saliva are heavy and drop out of the air pretty quickly, whereas airborne particles can float for long distances.

“It’s like the water around the virus has dehydrated away and there’s kind of a little bit of a coating around the virus, but otherwise it’s mostly just the virus,” Eisenman says. “It’s sort of like a gel-like coat that is light enough to stay airborne.”

Scientists haven’t fully determined whether the coronavirus can be spread this way. “Even with flu, it’s still being debated how much is by fine particle aerosol vs. droplet transmission, although the majority is very likely droplet,” Morse said.

Coronaviruses are not generally airborne. “It’s unlikely that this [new virus] happens to be different,” Chiu says. “It’s more likely that it’s not airborne, although it’s too early to definitely say that yet.”

The virus has been detected in poop

There is some evidence that COVID-19 can be transmitted through contact with infected feces, but scientists don’t know for sure.

Researchers in China have detected RNA from the virus in the stools of people with COVID-19. This doesn’t necessarily mean that the stools were infectious. “It’s certainly possible that if you identify a virus it may be all dead or degraded viral RNA, in which case that sample is not going to be infectious,” Chiu says. “But we obviously can’t make that assumption.”

And there is precedent for a coronavirus being spread this way. During the SARS epidemic in 2003, an outbreak of the disease erupted in the Amoy Gardens apartment complex in Hong Kong and sickened more than 300 residents. Scientists now suspect that leaky sewage pipes were to blame for spreading the virus.

Even if COVID-19 can be transmitted through contact with feces, however, this likely won’t be the main way that people get sick. It’s probably a minor route, “but could be important in some settings,” Morse said.

You’re probably safe from your toilet seat, though

It is…very unlikely that you will catch COVID-19 from a toilet seat.

“[It] depends on what you do with the toilet seat,” Morse said. “I can imagine the rare instance, but I think a low-probability event.”

Other diseases, such as Ebola, cause intense vomiting and diarrhea. Ebola can easily be transmitted through these bodily fluids. If somebody with Ebola uses a bathroom, any surface in that room—including the toilet seat—could at least potentially be a source of infection.

For most people, diarrhea is not a symptom of COVID-19. If it turns out that the coronavirus can be transmitted through poop, then the most likely way you’d catch it from a toilet seat would be if you touched a toilet seat and then didn’t wash your hands.

But you won’t get infected merely by sitting on the porcelain throne.

“If it lives on a toilet seat, it cannot infect you by just being picked up on the skin of your rump,” Eisenman says. “You still have to somehow get it into your mouth or nose or eyes.”

Scientists aren’t sure whether the virus is blood-borne

In the same study in which scientists detected viral RNA in stools, they also reported the genetic material in the blood of people with COVID-19. But that doesn’t necessarily mean that the virus can be transmitted through infected blood, Chiu says.

The coronaviruses that cause SARS and MERS have been detected in blood before. However, their presence is very short-lived. “The respiratory tract is really thought to be the site of infection for these viruses,” Chiu says. As far as he is aware, no coronaviruses have been transmitted by blood.

“The potential for transmission of COVID-19 by blood and blood components is unknown at this time,” Stephen M. Han, the Commissioner of Food and Drugs at the Food and Drug Administration said in a statement on February 27. “However, respiratory viruses, in general, are not known to be transmitted by blood transfusion.”

We also don’t know yet whether a pregnant person can pass the disease on to their fetus or newborn; there are no reports of this happening with SARS or MERS. There is also some very preliminary evidence that COVID-19 is not transmitted this way. Scientists in China recently reported that several infants born to women infected with COVID-19 tested negative for the disease, as did samples of the mothers’ breast milk, amniotic fluid, and cord blood.

You shouldn’t worry about catching COVID-19 from Fluffy

Officials in Hong Kong reported on February 28 that a pet dog belonging to a person with COVID-19 has tested “weak” positive for the coronavirus that causes COVID-19. However, this does not mean that the dog is actually infected; the dog has no symptoms and is currently being quarantined to determine whether the positive test might be due to “environmental contamination of the dog’s mouth and nose,” a spokesperson for Hong Kong’s Agriculture, Fisheries, and Conservation Department said in a statement.

For now, there is no evidence that pets can be infected by the coronavirus or spread it to people, according to that agency, the World Health Organization, and the Centers for Disease Control.

In some respects, the new coronavirus is behaving more like influenza than like its close relative, the SARS virus, Chiu says. Most people who were infected with SARS became severely ill and were contagious only when they had overt symptoms. By contrast, both influenza and COVID-19 cause few or no symptoms in some of the people they infect.

People with COVID-19 can be contagious even if their symptoms are very mild and there is evidence suggesting that it’s possible for someone with no symptoms to spread the new coronavirus. However, Morse said, it’s probably more common for people with mild symptoms of COVID-19 to transmit the infection.

It would not be surprising if COVID-19 can be transmitted by people who are asymptomatic, Eisenman says. “There are other viral illnesses where you can transmit it before you actually feel sick,” he says. “Even the common cold or flu is like that.”

The novelty and uncertainty of the virus makes it understandably worrisome. If these waves of panic do arise, it’s important to remember that based on what researchers know, COVID-19 is unlikely to be catastrophic.

“This is likely to look a lot more like a flu pandemic (perhaps somewhat nastier and more transmissible) than SARS,” Morse advised. “Not pretty, but not apocalyptic, either. But stay watchful if there are reports of local or regional circulation.”