The End Is Nigh For the Guinea Worm

Eradicating this this nasty parasite would be great for humanity, but should we consider the ecological impacts? 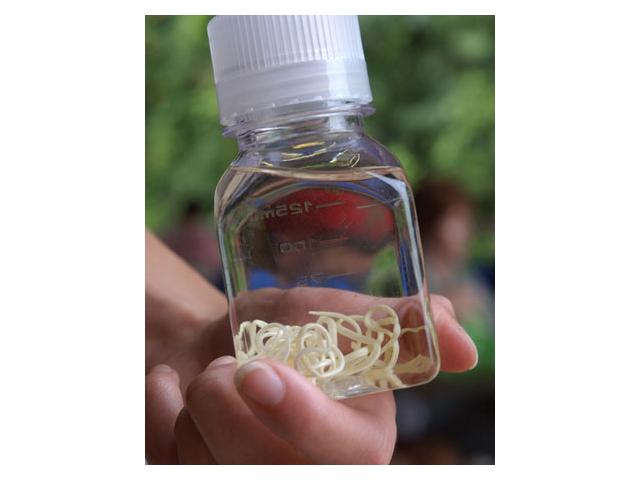 The guinea worm is one seriously disturbing parasite. When someone ingests its larvae by drinking unfiltered water, the worm reproduces and incubates for months in the person’s abdomen, sometimes growing up to three feet long. Eventually it slithers out through an excruciating sore on the person’s leg or foot, but it takes it’s time in leaving–sometimes up to several weeks. The guinea worm has afflicted humans across central Africa and Southeast Asia for millennia, relying on us for its proliferation.

Thanks to public health efforts from organizations like the UNICEF, World Health Organization and The Carter Center, the cycle might end altogether. For the last 30 years the organizations have been mapping cases the disease, implementing awareness programs and safe containment strategies, and ensuring access to clean water for those at risk. Their efforts have paid off; this week, the Carter Center announced that the number of cases of guinea worm reported in 2014 were 17. Just 17 in the entire world. That’s down 99.9 percent from 3.5 million cases per year in the mid-1980s, and down 80 percent from the same time last year. Some experts believe that the worm could be eradicated as soon as next year.

But is that a good thing? It’s certainly good for humans. But doesn’t each organism play a vital role in a complex ecosystem, even parasites? Might we see an unintended ecological impact if we get rid of the guinea worm?

These are questions that experts like Pieter Johnson, an evolutionary biologist at the University of Colorado in Boulder, have been mulling over for a while. If we were able to eradicate parasites all at once, he says, “It would change ecosystems and food webs in dramatic ways, some of which humans would deem desirable and some less desirable.” Even though they’re often not good guests, parasites play an important role in stabilizing food webs. An animal weakened by a parasite is easier prey for those higher up in the food chain, allowing the predators’ population to grow–so a world without parasites could mean fewer lions, tigers and bears.

However, some species of guinea worms only use humans as hosts. Is the food chain still affected if we get rid of those? Johnson compared the guinea worm’s impending eradication to that of two other infamous plagues: smallpox and rinderpest.

When smallpox was eradicated in 1979, it meant no more victims for a disease that killed an estimated 300 million people in the 20th century. But in recent years pathologists have seen more cases of monkeypox in humans, which usually affects rodents and is related to smallpox. “It’s starting to spread [in humans] because fewer people have that residual resistance,” Johnson says. And, while monkeypox has nowhere near the impact that smallpox had in its prime, Johnson notes that, “it’s doing some interesting things.”

Rinderpest is another disease that humans have successfully eradicated, although it didn’t directly affect us. The virus would infect cattle, buffaloes, deer and other large mammals, killing 95 percent of affected herds. For centuries it has decimated the food supply of any society that relied on cattle as far back as the Roman Empire, and even wiped out 80-90 percent of the cattle in Africa when it was introduced in the late 1800s. It was officially eradicated in 2011. Since rinderpest was not endemic to most of the places it spread to, the impact of its introduction and removal on different ecosystems was dramatic, Johnson says. “We could actually see the dynamics unfold; there were changes in the fire regime, with lion populations, in the grasslands,” Johnson says – the ripples were far-reaching. Such a change wouldn’t be quite so noticeable with the elimination of the guinea worm, he notes, because it’s endemic to the few countries where it still remains.

While the guinea worm may have some small effects on water ecosystems, Johnson is confident that we wouldn’t miss it if it were gone. “My guess is that this is a case where the cost in human suffering is clear,” Johnson says. “The ecological impact is probably small relative to the public health benefit.”

So, no need to lament the guinea worm’s elimination. You can dance on its grave, unworried about future disruptions in the ecosystem. Hopefully its impact will be relegated to terrifying children in sci-fi movies, where it belongs.