The Complex Rise of a Deadly Disease

Eastern Equine Encephalitis Virus is rare in America but a dynamic between birds and mosquitoes may make it more common. 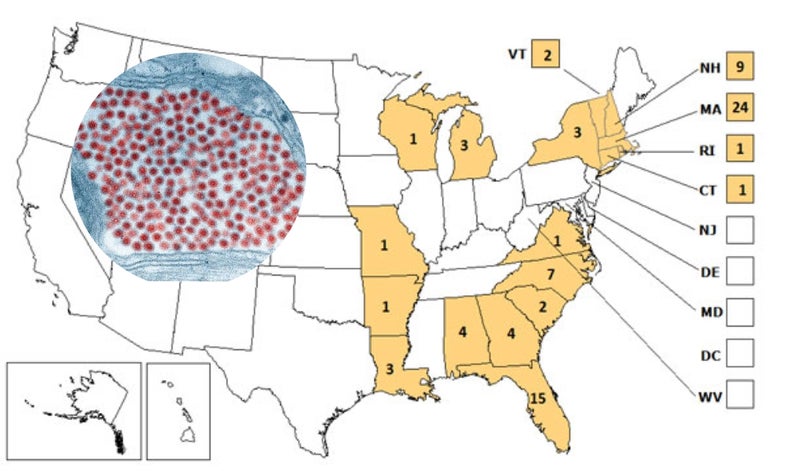 Back in 1933, in Virginia and New Jersey, a new virus was discovered in horses. It was the cause of severe neurological illness in these animals in the form of encephalitis. This wasn’t a new observation as similar infections were occurring in the western part of the country caused by a virus known as Western Equine Encephalitis Virus (WEEV). But this virus seemed to differ as it had a much higher mortality rate. It was aptly named Eastern Equine Encephalitis Virus (EEEV).

Since the discovery, EEEV has proven to be a rare but lethal enemy in humans as well as horses. Over the course of 40 years of surveillance from 1964 to 2004, 220 cases have been confirmed with anywhere from a 50-70% mortality rate. In comparison, its Western cousin only kills about 3-7%. The rate of infection is still thankfully low but there is evidence of a slow rise in cases. From 1999-2007, there were 80 infections and in 2013, eight cases were recorded. The fatality rate was between 42 and 50%.

Monitoring horses may seem like the best route to understand virus prevalence but they are not the culprit when it comes to spreading the disease. That belongs to birds. Several species have been found to harbor the virus and they all have the ability to spread it to a variety of animals, particularly birds. As they are migratory, they could be the actual source for the rise of infections.

The transmission dynamics of the virus are complex and involve several factors including climate, avian host birth rate, migration patterns, and climate. Depending on how these individual parameters shift over time, the prevalence of the virus could change. Yet, despite the expected ebbs and flows of infection, the clinical data in humans suggests there is a slowly increasing trend.

Now there may be an answer to explain the emergence of the virus. Last week, a team of American researchers revealed they may have an answer to the rising trend in cases and also the potential for expansion. It’s a complex mix of the virus, migratory birds and a third, well-known culprit responsible for a variety of infections: the mosquito.

Researchers have long known mosquitoes are a vector for EEEV; they are responsible for infecting horses and humans. But their involvement in the emergence of the virus has not been seen as significant. After all, mosquitoes are always present in these areas and their numbers do not always correlate with infections. In 2009, when an outbreak occurred in animals in Maine, none of the mosquitoes tested positive for the virus.

The authors suggested they were merely bridge vectors, meaning they only transferred the virus over a very short period of time. Higher density in a particular area could indeed increase localized risk. But the overall large-scale perspective essentially took these insects out of the picture. This study brings them back into the spotlight and offers a clearer picture of how the mosquito really is the problem.

The group focused on two counties in Vermont. Over five months, they collected 574 blood-engorged mosquitoes from seven different species. Once the insects were caught, they were taken back to the lab for a variety of analyses.
The first job was to identify the mosquito species with the greatest prevalence of virus. That belonged to Culiseta melanura (also known as the black-tailed mosquito). There were only five virus isolates and they all came from this species.

With the primary vector determined, the next job was to figure out how the virus could spread. This meant looking at the blood meal. The group found birds were the most likely target although the species of choice changed over time. The Green Heron was the most popular choice in June and July whereas no Heron blood was found thereafter. In total 49 species of bird blood were found with the prevalence changing based on avian migration patterns.

The choice for Green Heron was significant to the authors. While the bird species has never been looked at for the presence of EEEV, its avian family has been known to harbor the virus. This suggests the virus may be introduced into the area during the early summer months. Then, when the Herons migrate away, the mosquitoes begin to transfer the virus to other species, such as the Robin, the Yellowthroat, and the Chickadee.

As for the increase in human infections, the authors had a theory. In their study, only 5.7% of the blood samples for this species were mammalian. Even smaller was the number of samples containing human blood: 1.2%. This low number equates with the potential for only a few cases per year. However, if these mosquitoes shift their choice to humans, the risk could grow significantly.

Moving forward, the authors suggest the black-tailed mosquito should be a focus for surveillance as it is the most likely source for infection in humans (at least in Vermont). Although the risk continues to be very low, this step forward could help public health officials better understand the risk from year to year. It may not be perfect to prevent all infections, but considering the high fatality rate, any information to reduce the threat is well worth the effort.