North American mosquitoes can carry a lot of viral baggage 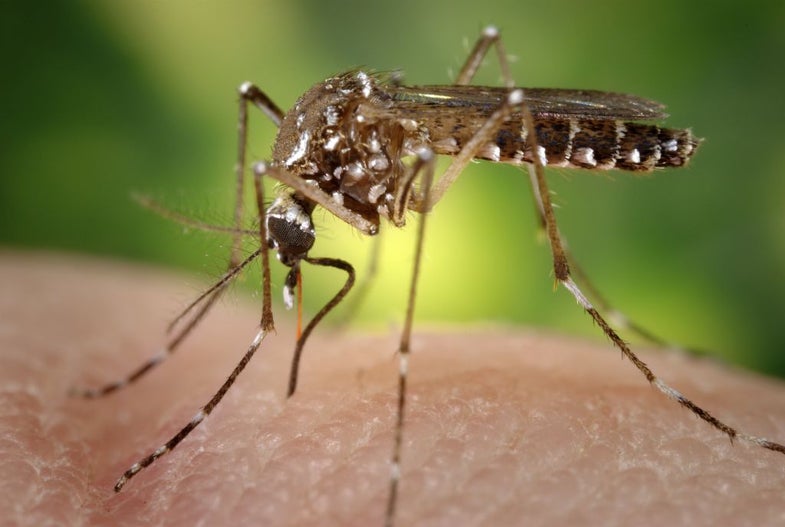 2006 Prof. Frank Hadley Collins, Dir., Cntr. for Global Health and Infectious Diseases, Univ. of Notre Dame This 2006 image depicted a female Aedes aegypti mosquito as she was obtaining a blood-meal from a human host through her fascicle, which had penetrated the host skin, was reddening in color, reflecting the blood?s coloration through this tubular structure. In this case, what would normally be an unsuspecting host was actually the CDC?s biomedical photographer?s own hand, which he?d offered to the hungry mosquito so that she?d alight, and be photographed while feeding. As it would fill with blood, the abdomen would become distended, thereby, stretching the exterior exoskeletal surface, causing it to become transparent, and allowed the collecting blood to become visible as an enlarging intra-abdominal red mass, as is the case in PHIL# 9175, and 9176. As the primary vector responsible for the transmission of the Flavivirus Dengue (DF), and Dengue hemorrhagic fever (DHF), the day-biting Aedes aegypti mosquito prefers to feed on its human hosts. Ae. aegypti also plays a major role as a vector for another Flavivirus, "Yellow fever". Frequently found in its tropical environs, the white banded markings on the tarsal segments of its jointed legs, though distinguishing it as Ae. aegypti, are similar to some other mosquito species. Also note the lyre-shaped, silvery-white markings on its thoracic region as well, which is also a determining morphologic identifying characteristic. Photographer: James Gathany
SHARE

Most people hate mosquitoes, and who could blame them? At best, we associate mosquitoes with itchy red bites. They also happen to be our most deadly animal adversary: 400,000 people died of malaria alone in 2015, which was a huge improvement from death tolls in recent years. The recent spike in Zika cases—and the spread of the disease into new regions like North America, thanks to global warming—has researchers working even harder to understand how the insects got so good at transmitting pathogens and how we might stop them.

But if you think Zika sounds bad, just imagine contracting that virus and another exotic ailment from the same irritating little mosquito. According to new research from Colorado State University, that’s totally possible: The scientists were able to infect mosquitoes with both Zika and chikungunya, a virus that causes fever and joint pain in humans. And when they tested the amount of mosquito spit that would usually go into a single bite, they found enough copies of those viruses to simultaneously infect a human host. The team also confirmed previous reports that chikungunya and dengue virus could shack up in the same mosquito. It remains to be seen whether a nasty trifecta is possible, but all three of these viruses have been spotted in North America in recent years.

“The possibility exists in the new world that patients may be infected with more than one of these viruses more frequently than we predicted,” says Greg Ebel, who oversaw the new research in his lab.

His students’ findings were presented this week at the 2016 Annual Meeting of the American Society of Tropical Medicine and Hygiene, but they haven’t been submitted for publication yet. The findings, Ebel readily admits, are still preliminary—and the results don’t suggest that these concurrent outbreaks are common. In fact, he and his team aren’t even sure what would happen if a human was simultaneously infected with Zika and chikungunya at the same time.

“When they do transmit two viruses at once, does that affect pathogenesis? We really don’t know,” Ebel says.

But while it’s tempting to freak out over the possibility of a double or triple viral infection, Ebel and his colleagues are more concerned with how the viruses might interact inside mosquitoes than they are with theoretical human symptoms. The human scenario is a little too far-fetched to prompt immediate concern, but if the viruses behave strangely when they end up in the same mosquito, that could have implications for the transmission rate of any of those illnesses in humans.

There are a lot of ways future studies could improve upon the work, according to Ebel. His team used mosquitoes bred in a colony that’s been inside a lab for generations, and wild insects are always better for research—after all, wild mosquitoes continue to evolve with each generation, so a lab colony might not have some of the adaptations that help insects do a virus’s dirty work. But using wild mosquitoes is easier said than done.

“What you basically have to do is get the mosquitoes, bring them to the lab, rear them to adulthood, and then in order to infect them you have to grow three viruses in the lab independently, then feed them to the mosquito and make sure you’re infecting them with a one to one ratio of each virus, and then you have to collect their saliva,” Ebel trails off. “It’s very labor intensive.”

A multi-viral mosquito bite shouldn’t go high on your existential worry list for 2016. But a better understanding of how these mosquitoes interact with different viruses – and how they evolved to do so – could help researchers develop new methods for stopping the spread of disease.