A Possible Probiotic For Bats 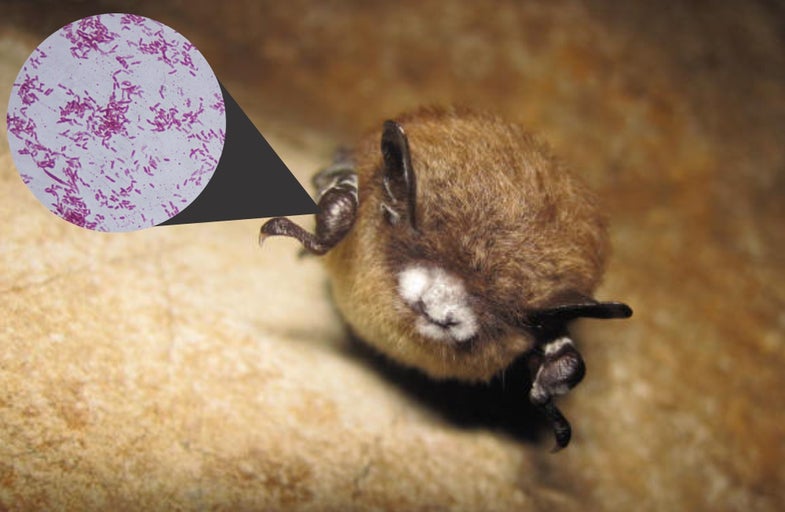 Bats in North America have a real problem. It’s a fungus called Pseudogymnoascus destructans although it’s more commonly known by the disease it causes, white-nose syndrome. Millions of bats have died over the last decade leaving the National Wildlife Health Center no option but to consider this disease an ecological threat.

The effects of the disease are dramatic as well as vicious. Once the fungus ends up on the skin, it can colonize the nose and other areas of the body including the wings and ears. The hyphae of the pathogen can cause itchiness but can also eventually erode the skin, causing ulcers. This unfortunately means a disruption in winter hibernation as the animals are forced to wake up every few days to alleviate the itch by scratching. In the process, fat reserves are depleted and the animals become prone to starvation. Without proper nutritional resources, particularly in winter, starvation may take over, leading to an agonizing death.

While the causes and symptoms of the disease have been characterized, the identification of potential treatments has not gone over well. The primary concern is the onset of anthropogenic effects from human intervention. Culling infected animals for example, may end up causing shifts in the population and alter the overall ecology. The use of quarantine may also offer some benefit although this too has its drawbacks as it may end up inadvertently spreading the fungus. The provision of anti-fungals has also been examined and tried although in light of the size of the bat population in North America, the effort only has limited value.

There may be, however, a natural and safe option using another ecological niche: probiotics. The use of environmental anti-fungal species considered commensal by bats may offer a route to prevention and control. The only hurdle to this route, of course, is to identify appropriate candidates.

Last year, one possible option was proposed in the form of the bacterium Rhodococcus rhodochrous DAP96253. In the laboratory, this bacterium was modified to be induced by urea into possessing anti-fungal properties. The end result was the destruction of the pathogen without any potential side effects to the bat. Unfortunately, the potential for field applications was limited as providing the bacteria with the right medium would be difficult to accomplish. Yet it provided at least a step forward in the hunt for a natural option.

Last week, a team of researchers from California took a giant leap forward as they reported on the ability of several bacterial species to suppress fungal growth. The results went even further as the bacteria identified were not only naturally found in the environment but also were part of the bat’s natural skin microbiota.

The process began with the isolation of bacteria from hibernating bats. Swabs from the forearm and muzzle were taken from four different bat species. Back at the lab, the swabs were incubated and the bacteria isolated. A total of 133 bacterial strains were isolated giving the researchers an excellent pool of options for testing.

The next stage involved determining which species had anti-fungal activity. The bacteria were introduced to an already growing fungal culture of P. destructans to determine whether they could kill. Then the process of exposure was reversed as the bacteria were grown and then exposed to the fungus. This could determine if fungal growth could be prevented. From the 133 tested, six ended up showing promise for both prevention and control. A closer look at their biological classification revealed they were all from genus Pseudomonas.

The final test involved examining whether the killing was a result of protection or whether the Pseudomonas targeted the fungus. The group did this by examining the motility of the bacteria and observing if there was any movement towards the hyphae. In this case, there was no sign of targeting. The bacteria were not preying; they were simply protecting their territory.

The identification of species not only able to kill the fungus but also making up part of the skin microbiota suggests there may be a possible route to remedy. The introduction of these species into the bat population could improve their overall health and lower if not eliminate the risk for anthropogenic effects. The authors suggest the next step is to develop and test a probiotic intervention with a number of different hibernating bats. If these tests prove successful, then this may prove to be the natural, consequence-free option wildlife officials need to halt the spread of white-nose syndrome and help to restore the bat population to a more comfortable level.