A Truly Global Germ: The Case of Malassezia

Whenever a pathogen is discovered, one of the most important aspects of prevention and control is identifying the source. Researchers... 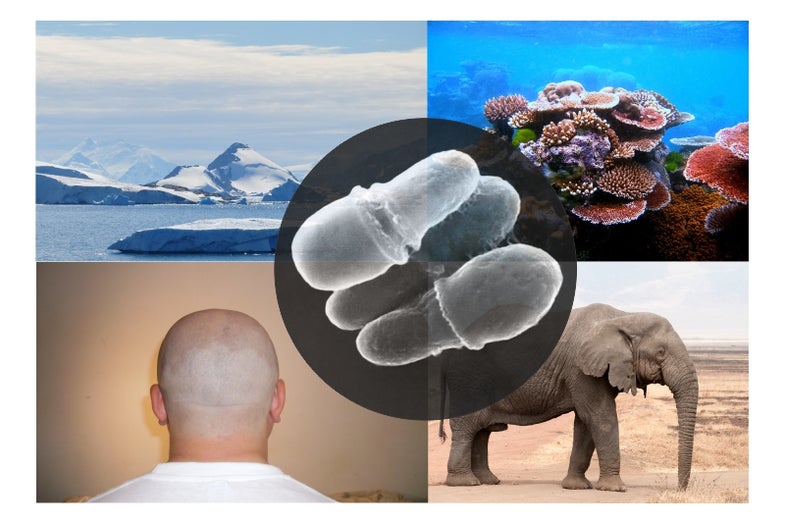 Whenever a pathogen is discovered, one of the most important aspects of prevention and control is identifying the source. Researchers and public health officials work tirelessly to find the reservoir in the hopes of bringing the scourge to an end. Sometimes, the hunt can take some surprising turns and reveal unexpected and at ties unprecedented characteristics.

Over the last few months, these efforts have been widely publicized for three specific pathogens. In West Africa, the hunt for the origin of the Ebola virus has led to the identification of fruit bats as the likely source although bushmeat may also be the origin. In the Gulf Peninsula, the hunt for carriers of the Middle East Respiratory Syndrome (MERS) virus has brought a number of potential conclusions. Studies have shown the virus may be in camels yet there is still debate as to whether this means they are the true source. Most recently, a Salmonella outbreak in the United Kingdom led officials to scour every option to find the cause of over two hundred infections. Eventually, they found the source in eggs and efforts began to bring the outbreak under control.

In all of these cases, one or a few options are identified and then tracing can proceed. Yet, there are other situations in which the potential source is not singular or even limited to a few options. In some cases, the microbial cause can be so ubiquitous it can be found everywhere on Earth. Such an example was described last week involving a very common fungal skin pathogen, Malassezia.

Malassezia has been known for well over a century. It is a yeast-like fungus named after the French anatomist Louis-Charles Malassez, who is best known for creating the cell-counting microscopic chamber known as a hemocytometer. Originally described in 1889 by Henri Baillon, the genus has expanded from one species, M. furfur, to over a dozen different species.

The fungus is known to cause a few complications in humans, most notably dandruff and eczema. However, other mammalian species are susceptible to disease, including dogs, cats, horses, rabbits, pigs, goats, sheep, elephants and even primates. The widespread nature of the fungus suggests the source, unlike Ebola, MERS and Salmonella, had to be ubiquitous. Unfortunately, there was no common possibility and as such, a broader search would have to proceed.

Enter the realm of DNA barcoding. The practice has become an important part of developing a catalogue of all life and has become important particularly in the incredibly diverse fungi. When environmental samples were taken from a plethora of sites, including deep-sea sediments, hydrothermal vents, fish species and even Antarctic soils, one species found in humans, M. restricta was discovered. Closer analysis of the samples revealed the species was nearly identical in nature to the one found on human skin.

Taking the exploration further, the authors compared the sequences of collected fungi from the various regions. The results were once again incredible; there was little effect of environment on the genetic similarities. Marine and terrestrial microbes were interdigitated within the same clade suggesting they had travelled back and forth between the two environments. This also suggested that the fungi had developed mechanisms to withstand almost any type of environment, whether the pressures of the deeps or the few minutes of dandruff shampoo.

Though the data was remarkable, it offered more questions than answers. The fungus was no doubt one of the most widespread microbes on Earth and had adapted to thrive in almost any environment. In many marine environments, it was a dominant species although rarely caused infection suggesting symbiosis. How therefore it became a pathogen for mammals remained unanswered as did the means by which it found its way to the animal world. What was clear, however, was that further study was needed to determine the impact on the world and human lives.

While in the context of pathogens and epidemics, the identification of the global presence of Malessezia may appear to be academic in nature. However, as more emerging pathogens begin to make their way into the human realm, this study offers a unique perspective. While we may believe we have a good understanding of where a pathogen may originate, using a wider scope may reveal new information to not only increase our knowledge but also provide direction as to how to control and even prevent future outbreaks.