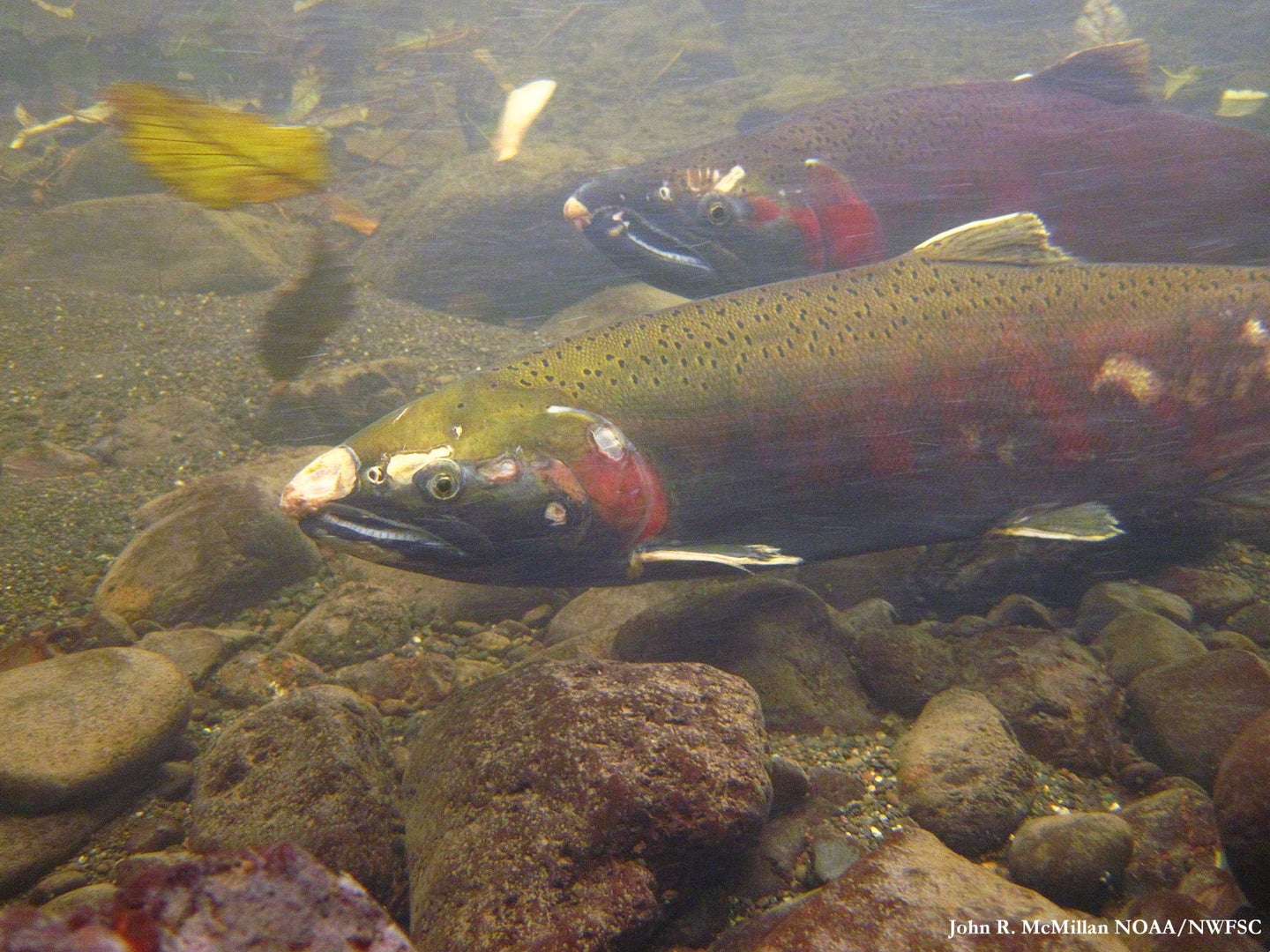 Every fall, coho salmon undertake an epic journey from the ocean back to the freshwater streams and creeks where they were born so they can reproduce and then die shortly after. For several decades, though, scientists have observed that a disturbing number of these migrating fish in the Pacific Northwest die while swimming through urban waterways polluted by stormwater runoff. At some sites, between 40 and 90 percent of returning salmon may die before they have a chance to spawn.

Now scientists have discovered a possible culprit behind these annual die-offs. Researchers found that a common ingredient used in tire rubber reacts with ozone (a toxic gas) to form a chemical that is extremely poisonous to coho salmon. The team found evidence of this chemical in stormwater samples collected from across the West Coast.

It’s not yet clear just how ubiquitous this compound, which the researchers termed 6PPD-quinone, might be in urban waterways, said Edward Kolodziej, an environmental engineer and chemist at the University of Washington in Tacoma and Seattle and co-author of the study. However, it’s likely that 6PPD-quinone is hazardous to other aquatic animals in addition to salmon, he and his colleagues reported on December 3 in the journal Science.

“There are a lot of compounds at low concentrations in urban runoff [for which] we just don’t fully understand all of their effects,” says Richard Luthy, a professor of civil and environmental engineering at Stanford University and director of the National Science Foundation’s Engineering Research Center for Re-inventing the Nation’s Urban Water Infrastructure, who was not involved in the new research. Among the pollutants that scientists know the least about are water-soluble chemicals from tires and pesticides, he says. “We need more studies like this to understand how to do the best job we can in managing urban runoff.”

Kolodziej and his team had previously reported that urban creeks where salmon are likely to perish have similar chemical compositions to roadway runoff and water leached through tire tread particles. To find out which chemicals were responsible for the die-offs, the researchers exposed juvenile coho salmon to water contaminated by tread particles from new and used tires. Most of the fish died within several hours after showing symptoms that matched those seen in wild salmon poisoned by stormwater runoff, including gasping and disorientation.

The team then exposed coho salmon to different chemicals found in the rubber mixture. Eventually, the researchers pinned down a deadly chemical that caused the fish to begin developing symptoms of distress within 90 minutes. “It was both very toxic to fish and present in all the roadway runoff samples we analyzed,” Kolodziej told Popular Science in an email. The mysterious chemical, which produces a pinkish-magenta substance when dried, wasn’t mentioned in published descriptions of tire rubber or contaminated waters.

The researchers determined that the chemical is formed when a preservative known as 6PPD reacts with ozone. 6PPD is designed to extend the lifespan of tires by reacting with ozone in the surrounding air before it has a chance to interact with the rubber and weaken it, Kolodziej said. He and his team found 6PPD-quinone at toxic concentrations in previously collected samples of roadway runoff and contaminated waterways collected around Seattle, San Francisco, and Los Angeles.

The researchers aren’t sure yet what makes 6PPD-quinone so toxic. However, identifying the chemical that may play the biggest role in killing coho salmon is a first step in protecting the beleaguered fish.

“This knowledge will allow us to better manage water quality, optimize how stormwater treatment systems work, and understand why some species of fish struggle to thrive in some habitats,” Kolodziej said.

One important next step will be to find more environmentally-friendly chemicals to replace 6PPD in tires. “Another one is to look at ways in which we can very efficiently and inexpensively treat urban runoff,” Luthy says. He and his team are investigating how well materials such as charcoal can cleanse stormwater.