He focused on climate change, curing cancer, and re-igniting America's "spirit of innovation" 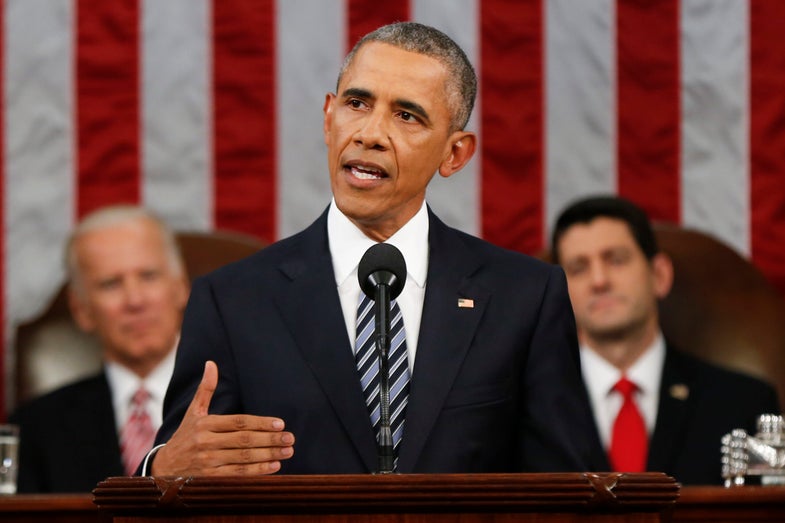 President Obama gave his seventh and final annual State of the Union address for his two terms as president tonight, and he took to the opportunity to include numerous science and tech references in his speech. The president addressed America’s science and tech accomplishments of the past, as well as his proposals for the future. Notably, he said the United States should aim to develop clean energy to combat climate change, and he announced a new “national effort” to cure cancer.

As in the past several years, the White House also went ahead and posted the entire transcript of the prepared State of the Union address text online as the speech began, this time on the blogging platform Medium. I’ve gone ahead and highlighted the big science and tech topics included therein, along with some introductory annotations of my own. Read the full address here. You can watch the full speech below or on YouTube.

Perhaps the most concrete sci-tech proposal included in the speech, President Obama called for a “national effort” to cure cancer as a kind of “moonshot” (language also previously employed by Google to describe its own ambitious projects). Here’s some of what Obama had to say about the idea;

Obama referenced the recent COP 21 climate change agreement out of Paris and also his ongoing (and controversial) government support for clean energy (via loan guarantees, tax credits, and other funding mechanisms). Yet he also took pride in the fact that fossil fuel prices have gone down under his tenure. As he said:

The president asserted that the U.S. is close to eliminating new HIV/AIDS transmissions, and said that malaria should be next. Advocacy group Avert notes that while Obama’s administration did usher-in the first truly comprehensive HIV/AIDS prevention and management program nationwide in 2010, the U.S. is still seeing about 50,000 new cases a year.

Space Travel, Past and Present

Obama made a glancing reference to the recent efforts of private spaceflight companies like SpaceX and Blue Origin to create new spacecraft for bringing astronauts into low earth orbit, but also harkened back to the U.S. moon landing and the-then Soviet Union’s Sputnik launch to call for “the spirit of innovation” to be “reignit[ed]” in America.

One of the lesser-known efforts of the Obama Administration has been to spur the opening of public/private centers focused on new forms of manufacturing like 3D-printing, a handful of which have indeed already been created at universities and other labs across the country. Obama made a quick reference to the program in his #SOTU:

The president also referenced American sci-tech pioneers of the past as well. As he said:

As with many speeches by political figures, the address was short on the specific details of how the president hoped America would accomplish the goals he laid out, but we will be tracking those as they emerge in the coming days (or don’t!). Regardless, even discussing the topics as openly and vociferously as President Obama did meant it was a good night for sci-tech in Washington.