It's not enough to hurt humans, but it's not good news for the food chain 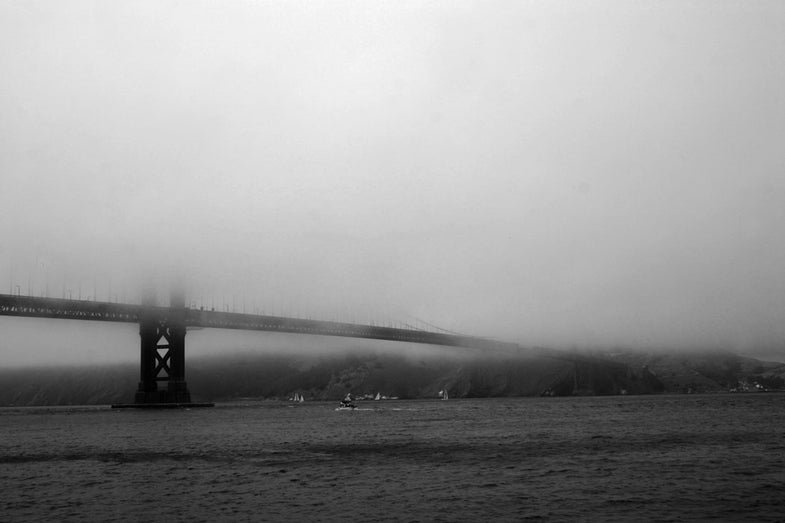 Fog is a hazard to ships, but it might also be a problem for the food web.

Today at the American Geophysical Union’s fall meeting, researchers discussed new evidence that the amount of coastal fog is not only increasing, but in some areas of California at least, it contains a surprising amount of a form of mercury called monomethylmercury. Although monomethylmercury can be hazardous to human health, there’s not enough of it in the fog to be dangerous.

Marine fog typically arrives in the summer months in areas where ocean surface temperatures are cold, but the air above is warmer. Clive Dorman of San Diego State University said that by analyzing the records of ships in the coastal areas in northern California and Oregon, he was able to show that between 1960 and 2007 the number of days with fog on the coast went up by 7.4 percent, a finding that mirrors other high-fog areas around the world, like the Grand Banks off Newfoundland, which also have a considerable amount of fog that has likewise been increasing.

The increase matters, not only to ships, but to ecosystems on land. Kenneth Coale of Moss Landing Marine Laboratories and Peter Weiss-Penzias from UC Santa Cruz found that levels of a kind of mercury called monometylmercury were 19 times higher in fog than in rain, even in the same area.

Mercury gets into the oceans from smokestack emissions and other industrial sources. It is a public health concern because it tends to build up in the food chain, as animals with low levels of mercury in their bodies are eaten by carnivores. The carnivores, which may eat many mercury-contaminated prey, end up with a lot of mercury in their bodies. The most worrying form of mercury is monomethylmercury, a kind of mercury linked to severe health effects in humans, including kidney failure, birth defects, and neurological impairment.

Previous research by the team had found that the fog had just five times the levels of monomethylmercury as rain. Now, in addition to noticing even higher concentrations, they think they may have figured out where the monomethylmercury is coming from.

The answer is another form of mercury–dimethylmercury, a gas that is also present in ocean water, and which comes from smokestacks and mining.

It turns out that most fog is slightly acidic, and the acid is enough to convert the gaseous dimethylmercury that emerges from the oceans into the more solid monomethylmercury. The fog then carries it inland where it is deposited on various surfaces and eventually enters the food chain.

So what does that mean for us? Nothing much right now. The levels of mercury in the fog, though higher than that of the rain, don’t reach a level where they are an immediate public health risk. But the results are worrying in a larger sense. Mercury has been measured in terrestrial plants and animals, and might have an impact on land-based food webs.

“I would definitely not eat any spiders from foggy areas,” Coale joked at a press conference. Spiders in the area have been measured as having mercury levels above the FDA’s accepted limit.

Humans generally don’t eat spiders, but birds and other animals do. Coale and Weiss-Penzias plan to continue their work looking into how mercury from fog affects the food web on land, and hope to eventually be able to use drones to monitor the fog as it comes in.