And the rockets red glare, the pollutants in air...

The bright spots jettisoning outward are the ignited star pellets, shooting out from the exploding burst charge. GIPHY
SHARE

This weekend is the Fourth of July, a time for family, and hot dogs and, of course, fireworks.

Fireworks are awesome. They are the best. They are also flaming rockets of exploding material that we send flying into the air above our heads. And amazing as they are, there is a downside.

And we aren’t talking injuries, or fires (PSA: Don’t be dumb with fireworks), though both are serious. Apparently an unseen danger or fireworks lingers in the air after they go off. Researchers with the National Oceanic and Atmospheric Administration (NOAA) published a study that showed that for a brief amount of time between the evening of July 4 and the morning of July 5, the amount of fine particles in the air goes up by 42 percent across the entire country. Measurements taken right next to areas where fireworks were being shot off showed an increase of 370 percent. 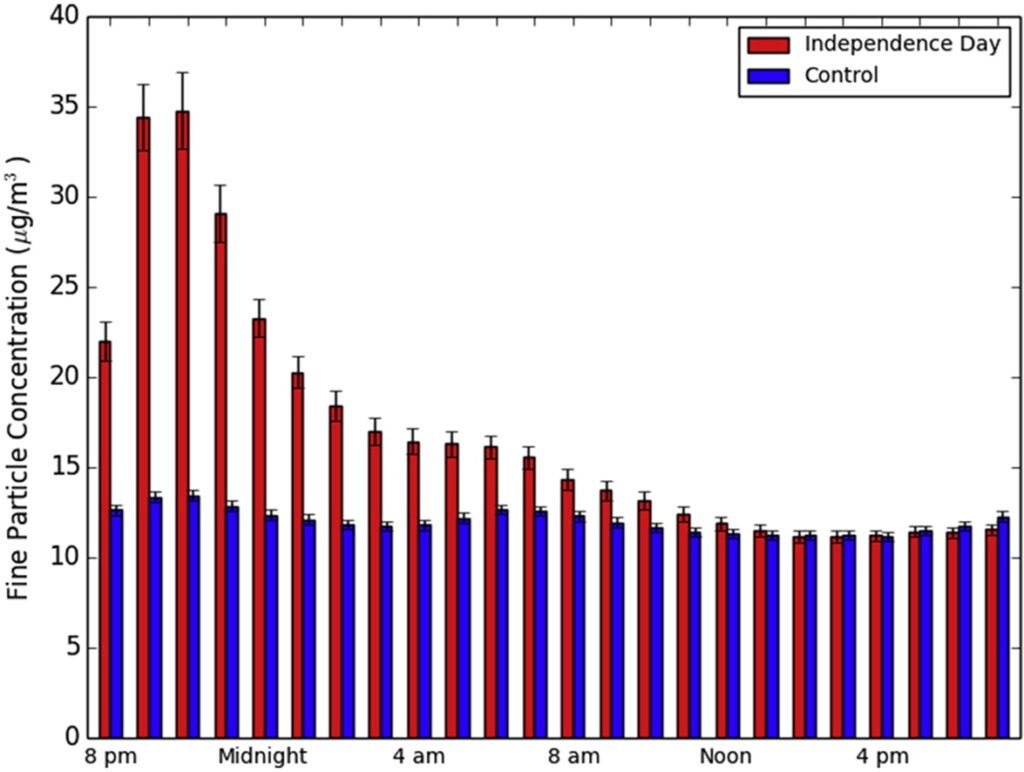 A graph showing the amount of particulates in the air during the fireworks free-for-all on Independence Day.

The particles that they looked at were particulate matter less than 2.5 micrometers across (PM 2.5), 1/30 the width of a human hair according to the EPA, and are a health risk because they can get stuck in people’s lungs. Once there, they can damage the lungs, blood vessels, and heart, especially if a person is exposed to them over long periods of time as is the case in areas with lots of exhaust, industry, or smog, all of which contain small particulate matter.

That’s a lot of fireworks, and a lot of pollution. But that doesn’t mean we should panic. While people that have respiratory illnesses should probably stand upwind of the fireworks, the increase in particulate matter due to fireworks shouldn’t make a big difference to the rest of us.

Whether or not you decide to take additional precautions, enjoy the show, and clean up after yourself.