2016 Hurricane Season May Be The End Of Hurricane Lull 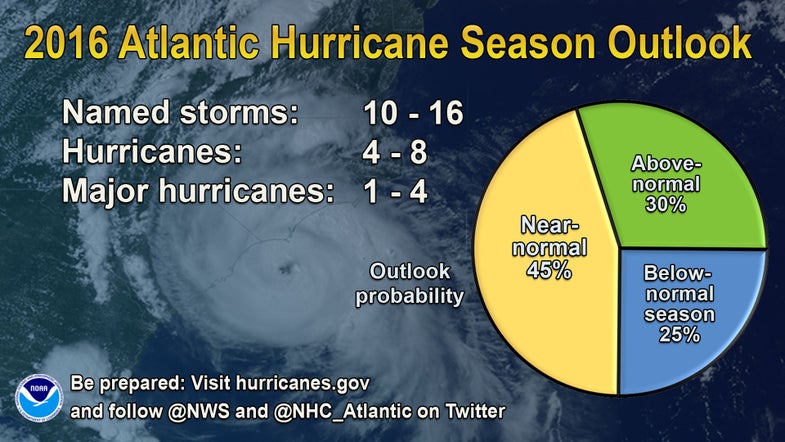 The Atlantic hurricane season starts today and runs through November 30th, and the outlook is…normal.

Last year, forecasters predicted a below-average season, part of a lull in hurricane activity over the past three years, but now things are picking back up, just a little bit. This year, NOAA is predicting 10-14 named storms, 1-4 of which might develop into major hurricanes, as opposed to last year during which 6-11 named storms and 0-2 major hurricanes were predicted .

Researchers still have no idea whether any of these predicted storms will make landfall or what their impacts might be, and are urging everyone to be prepared. Even a single, small-scale storm can be disastrous to an unprepared community.

“While seasonal forecasts may vary from year to year — some high, some low — it only takes one storm to significantly disrupt your life,” FEMA Deputy Administrator Joseph Nimmich said. “Preparing for the worst can keep you, your family, and first responders out of harm’s way. Take steps today to be prepared: develop a family communications plan, build an emergency supply kit for your home, and make sure you and your family know your evacuation route. These small steps can help save your life when disaster strikes.”

In making this year’s prediction NOAA researchers had to contend with many conflicting climate conditions, including two big players, the Atlantic Multi-Decadal Oscillation (AMO), and the transition between El Niño and La Niña.

On one side, the Atlantic seems to be edging out of a high-activity hurricane period caused by the warm ocean waters of the warm phase AMO that marked most of the 1990’s (each phase can last for 25-40 years). The shift towards the cooler phase of the AMO might indicate fewer hurricanes. But, on the other hand, this year also marks the potential arrival of La Niña, which tends to favor an increased number of hurricanes.

This year, there have already been two named storms even before the hurricane season began. Most recently, tropical storm Bonnie wrecked havoc on Memorial Day weekend plans, and Hurricane Alex was very early to the party, showing up way back in January..