The American Jobs Plans puts forward ambitious but necessary changes for a sustainable US, according to experts. 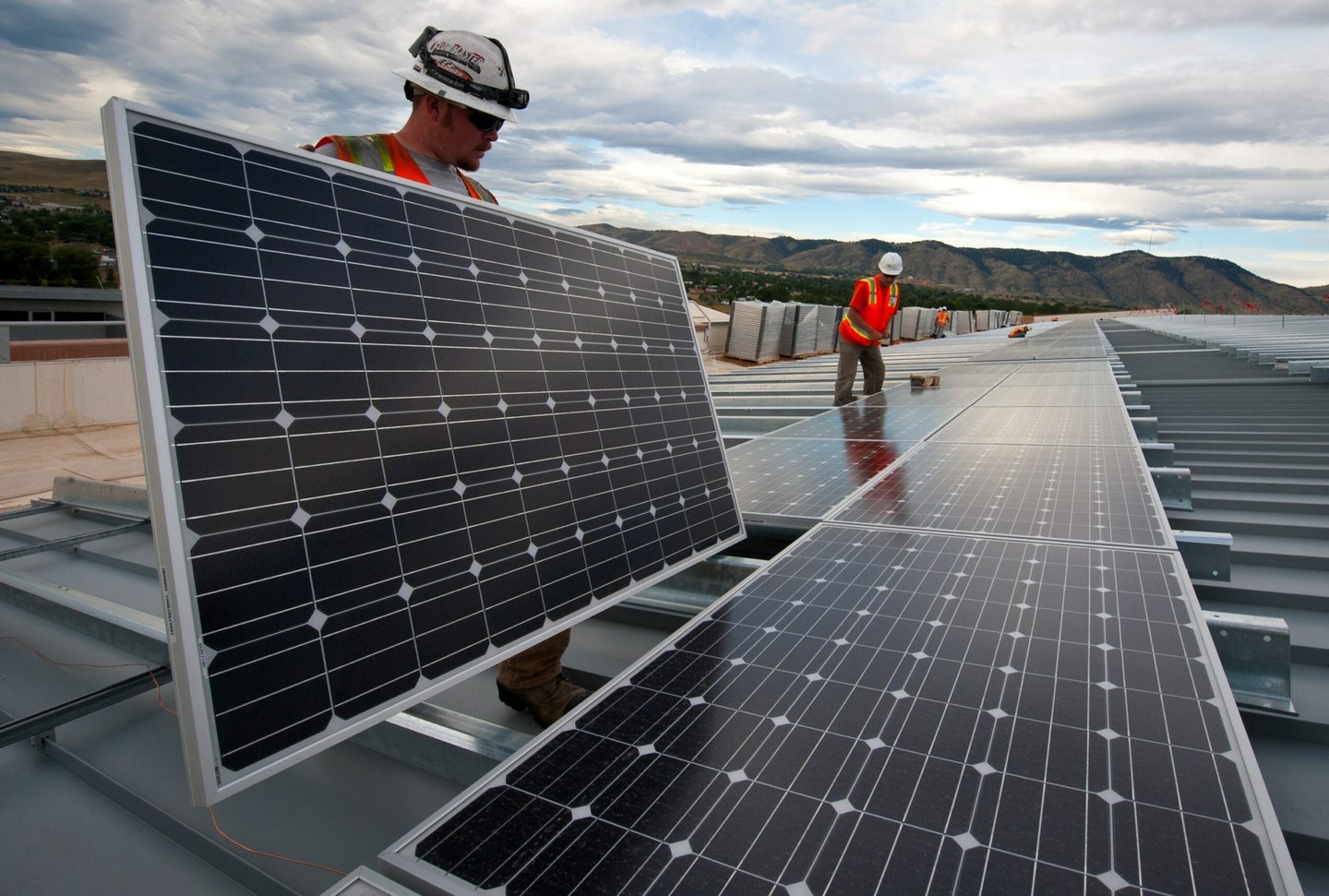 What would America look like powered almost exclusively by renewables? If things go according to plan, we may know within the next fifteen years. In an ambitious new jobs plan announced last week, President Joe Biden marked a goal of achieving 100 percent carbon-free electricity by 2035, among other changes that would lead the country to a more sustainable future.

Biden’s $2 trillion proposal, dubbed the American Jobs Plans, suggests a massive expansion of the clean energy sector through policies like extended tax credits, block grants, and expanding government purchasing power to spur the clean energy market. Executing such a huge plan will take considerable work, but ultimately experts like Bradley Klein, senior attorney at the Environmental Law & Policy Center, feel that this is the most hopeful plan for a sustainable future that the country has seen in many years.

“There really has been a market shift, from my perspective, over the last few years, that this is real, it’s happening,” Klein says. “And for the president to come in and really lay down a marker for clear goals for when the administration expects to hit a zero-carbon electricity sector, that crystallizes what many of us have felt in the sector for a while: that there is momentum. And now we have these goals to shoot for, and that provides a lot of enthusiasm.”

So how exactly could these sustainability goals be carried out, and what might some challenges be along the way? Looking at some of the major areas for sustainable policy shifts helps us understand how this plan can address our impending environmental woes.

America’s electricity infrastructure is flickering out. Our current grid existed for a different reality—one dependent on fossil fuels. Recent extreme weather events like the winter storms in Texas have exposed just how weak the system is. Biden hopes to move the country toward a power grid based on energy from renewable sources, like wind, solar, and biofuels.

Using government purchasing power to get federal departments, buildings, and fleets fueled by renewable energy is one way Biden intends for the government to lead by example. Having huge entities like the Department of Defense switch to clean energy can bring down development costs through mass production and convince Americans that renewable energy is the right way forward, according to Steven Cohen, director of the Earth Institute’s Research Program on Sustainability Policy and Management at Columbia University.

“Whenever you have a new product, the development of it costs more than using it again,” Cohen says. “The first version of something you don’t want to buy, let someone else have the one that breaks down, and the government absorbs all of that.”

But getting the entire country on board with a switch to potentially more costly clean energy systems will still take some serious convincing, especially in communities of the more rural areas of the Southeast, says Jennifer Weiss, a senior policy associate in the Climate and Energy Program at Duke University’s Nicholas Institute for Environmental Policy Solutions.

“Anything that’s going to increase [energy costs] in these rural areas, it’s not going to be looked upon kindly,” Weiss says. “I think people need to be confident that any solar or wind or any other type of clean energy investment is not going to bring a huge increase to their rates, because that will just increase energy burdens in the rural areas even more than they are today.”

In the long-term, Weiss thinks that the benefits of new, higher-paying jobs in sectors like energy efficiency and system training and maintenance will offset any increases to electricity rates that do occur.

A transition to a renewable energy grid will mean a shift away from today’s large electricity utilities to decentralized and networked community-based projects, according to Klein.

While there will still be huge wind and solar farms far from cities, he predicts a shift toward rooftop solar panels, batteries in neighborhoods, and community solar projects that allow their benefits to flow more directly toward their communities. This could make the shift toward renewable energy a more equitable one, where the economic benefits of the clean energy transition directly benefit environmental justice communities.

“To the extent you can plan and build a grid that will enable a lot more community based and community-owned solar and storage and other technologies, it is much easier to ensure that the benefits of that investment are flowing directly to the people that need it, including communities that have been historically marginalized,” Klein says.

But a community-centered energy plan is a far cry from the way we’ve traditionally used and controlled electricity and would need some serious changes—ones that might come across as a threat to utilities, according to Klein. Addressing this could come through direct changes to the utility business model and allowing more community participation in traditionally black-box regulation proceedings so it’s not dominated by utility interests.

“I think that’s one of the central challenges we are going to face as a society and need to overcome quickly if we’re going to maximize the success of this effort,” Klein says.

Another key to transitioning America to run on clean energy is the shift toward electric vehicles (EVs), and the plan devotes $174 billion to make the country an international leader in this market.

Car manufacturers from Volkswagen to Tesla for years have created new and more modern iterations of the EV, and in 2018 the country passed the one million mark for the number of these cars on the road. But there are many infrastructure elements that will have to be tackled to make this switch possible for all types of vehicles—cars, trucks, USPS fleets, and even yellow school buses.

Today’s EVs typically can go about 200 miles on a single charge, which will only get you around a fifth of the way down I-95 from New York to Florida. To make these multi-state voyages possible means more charging infrastructure.

“Range anxiety is real and I think his putting importance that we place chargers in the right places to make people feel comfortable and secure that they can get from one location to another, I think that’s going to be very important as well to help with overcoming the consumers’ risks or fears,” Weiss says.

Regions like the Northeast and West have already started building out this network, according to Weiss. Development will need to be focused on more rural areas in the Midwest and Southeast, where vast stretches of open land will need chargers every 10 to 20 miles.

To make this possible, Biden establishes a goal to build 500,000 publicly accessible EV chargers across the country by 2030, which will be increasingly important for apartment and city dwellers who can’t access at-home charging systems.

But Daniel Sperling, founding director of the Institute of Transportation Studies at the University of California, Davis, warns that public chargers are often not well-maintained by the government or other owners like shopping malls, who lack financial incentive for their upkeep.

“There’s almost no business for selling electrons to electric vehicles,” Sperling says. “You just can’t make money doing that. So somehow, somewhere you need more money flowing into the purchase and use of chargers.”

Beyond just getting public chargers on the map, more Americans need to be buying electric versus other gas-guzzling cars and trucks. Sperling says research shows point-of-sale incentives, like money off at the price of your car at purchase, tend to be most convincing, rather than tax credit incentives which benefit wealthy people the most.

The development of faster-charging batteries, the expansion of the EV market to include more choices from manufacturers, and the building out of the charger network will all be important pieces of the puzzle that is changing the makeup of America’s roadways, according to Joan Ogden, Professor of Environmental Science and Policy at UC Davis.

The plan also devotes $180 billion in funding toward the expansion of future-facing research and development in America, with at least $35 billion going directly toward developing green energy technologies, which in many cases could seriously benefit from financial support.

Better and cheaper batteries for storing clean energy are key to converting more of our energy systems to renewable grids, but the technology is still in the works. Futuristic fuel options, like hydrogen technologies, could also hold serious potential with a bit more research and funding.

But new technology isn’t the only thing that needs research—figuring out how to make the things we rely on less fossil fuel dependent is also crucial. These technologies include aircraft, long-haul trucking, and industrial needs like steel production, according to Ogden. Biofuel and carbon capture will both likely play a role in fitting these technologies into a net-zero emissions world, Ogden says.

The new Civilian Climate Corps, which are work opportunities for young people to conserve public lands and waters and advance environmental justice, will go into effect by the end of April.

“I have confidence that moving toward a more efficient, cleaner and healthier energy system will lead in the long term to a more vibrant economy and to a healthier economy and one in which there are more opportunities for more people to thrive economically,” Klein says.