Get amped to learn about lithium-ion energy storage! 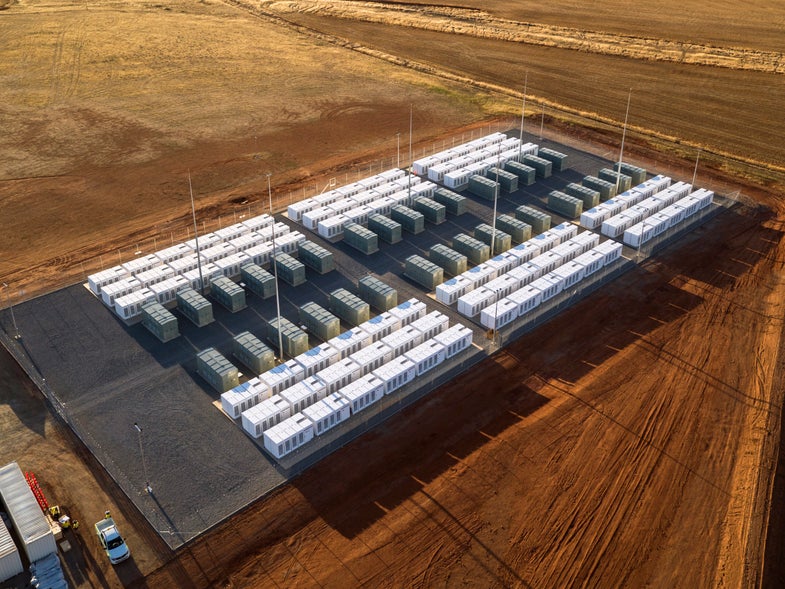 Note: This story was updated on December 1.

Elon Musk and Tesla have made good on an ambitious commitment, and the state of South Australia is now home to the world’s biggest battery. The battery installation is connected to a wind farm (that’s what gives it its juice) and the larger grid, and serves as an electricity reservoir for times when power demand peaks or the wind isn’t blowing. Musk, a P.T. Barnum-like showman who recently unveiled a new electric truck and next-gen Roadster even while the company’s Model 3 deliveries have been slow, had promised that the bold project would be free if they couldn’t complete it in time. Now, they have.

It’s fun to imagine an enormous Duracell battery sticking out of the ground, but in reality, the massive installation—it’s comparable to a football field’s footprint, according to The New York Times— is a network of batteries housed in Tesla-made units called Powerpacks. Tesla isn’t saying precisely how many Powerpacks make up the giant battery, only that they’re counted in the hundreds; it packs 100 megawatts of power capable of energizing over 30,000 homes, according to the company.

“The completion of the world’s largest lithium-ion battery in record time shows that a sustainable, effective energy solution is possible,” a company spokesperson said in a statement.

That battery is officially known as the Hornsdale Energy Reserve, and it’s about 9 miles from Jamestown, South Australia. Its completion comes as summer approaches and Australians will want to crank up the air-conditioning. “South Australia is now leading the world in dispatchable renewable energy, delivered to homes and businesses 24/7,” Jay Weatherill, South Australia’s premier, said in a statement.

“The best way to think about [the project] is a large field of refrigerator-like Tesla Powerpacks,” says Mark Tholke, the chief development officer of Advanced Microgrid Solutions. That company installs batteries made by Tesla into buildings for businesses, which can then store energy when power prices are low, and discharge it later to help save money and ease the strain on the electrical grid.

Systems like the one in Australia will also need to include inverters to convert the DC power that’s stored in the batteries to AC, which is used in the electrical grid.

Each Tesla Powerpack has 16 layers of batteries inside, and those battery pods, as the company calls them, contain cells.

“It starts with the individual cell,” Tholke says, which are small enough to “hold in your hand.” They are the fundamental building block of a battery, and in this case, the cells are a model called 2170, and made in an enormous Tesla facility in Nevada called the Gigafactory.

Those 2170 cells are Tesla’s multitaskers. They not only go in the company’s Powerpacks, which are designed for utility-scale usage, but also in their Powerwalls (meant for home use), and the Model 3, the company’s much-hyped production-level electric vehicle.

“The genius of the Tesla project is that they are able to string together a whole bunch of these cells,” says Daniel Abraham, a senior scientist at the Argonne National Laboratory who has been working on lithium-ion batteries for over a decade and a half.

Each individual cell is less than 3 inches long, smaller than 1 inch in diameter and works much the same way any lithium-ion battery would in your smartphone or laptop. When the battery is charging, positively-charged lithium ions move from one electrode, called the cathode, to the other, known as the anode, through an electrolyte solution in the battery cell. That causes electrons to concentrate on the anode, at the negative side. When the battery is discharged, the reverse happens. As for those electrons, they move through circuits that are external to the battery, providing juice for toasters, hair dryers, or, in this case, thousands of homes.

“It’s actually a sign of the maturity of the lithium-ion system that it is being considered for such large projects,” Abraham notes, as a decade ago the batteries were too pricey and projects like this were “not even on anyone’s horizon.”

Another big Tesla energy storage project is already online in Ontario, California. That 20-megawatt installation consists of a reported 396 Powerpacks and two dozen inverters. And a different major battery player, AES Energy Storage, has built a total 37.5 megawatts worth of battery storage at two other California sites.

South Australia was hit by a major storm last year, and the resulting blackout caused 1.7 million people to have no power; the region has suffered other blackouts since then. Tesla says that this massive energy storage system will help make the grid more “resilient.”

Tholke, of Advanced Microgrid Solutions, says that giant batteries like this can play an important role in mitigating the fact that with renewable power generation, the wind doesn’t alway blow and the sun doesn’t always shine.

“We think that these batteries are a key part of the energy transition to a lower-carbon energy system,” Tholke says. “The batteries just have amazing flexibility, and the prices have come down so dramatically in recent years.”

This project, he adds, highlights the fact that “the battery era is here.”

Note: A version of this story was originally published in July, 2017. It has been updated to reflect the fact that the battery project is now complete.