Of all places, the U.S. military has proven one of the fiercest proponents of renewable energy, and for totally practical... 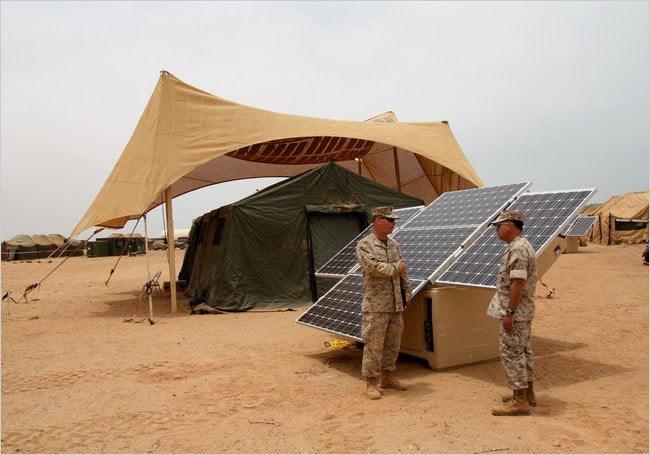 Of all places, the U.S. military has proven one of the fiercest proponents of renewable energy, and for totally practical reasons — most importantly cost and safety. Now, military higher-ups plan to rely on renewable energy sources for 50 percent of their power by 2020, which could help the worldwide advancement of those technologies immeasurably. One company of Marines, saddled with tons of solar power tech, is kickstarting this revolution.

The military is not a new player on the renewable energy scene; the Navy has previously pledged to have a “Green Strike Group” by 2012, was the biggest purchaser of electric cars in the country, and is working on “zero-footprint” camps. These aren’t ideological choices–renewable energy and many of its applications are simply better than fossil fuels in many ways.

Says Ray Mabus, secretary of the Navy: “Fossil fuel is the number-one thing we import to Afghanistan, and guarding that fuel is keeping the troops from doing what they were sent there to do, to fight or engage local people.” The convoys that deliver fossil fuel are frequent targets of insurgent attack, which can impair both the delivery system and the lives of civilians and soldiers–a study found that roughly one civilian or soldier is killed for every 24 fuel convoys sent. And given that fuel often makes up, 30 to 80 percent of every convoy’s load, according to the New York Times, that’s a lot of danger.

The 150 Marines of Company I, Third Battalion, Fifth Marines, which set off from California last week, are the first to bring renewable energy tech to a battle zone. That tech includes portable solar panels, solar chargers, and solar tents. The military clearly hopes this venture will serve as a model for the future–Mabus said that he’s pushing for the military to rely on 50 percent renewable energy by 2020. And with the military pushing so hard for new innovations in the field, the results will eventually drift down to us civilians. Hopefully these efforts can kickstart renewable energy–if it’s good enough for the Army, Navy, Air Force, and Marines, it’s surely good enough for your office.