Estuaries could power us to a low-carbon future

When freshwater meets saltwater, there's energy to be captured. 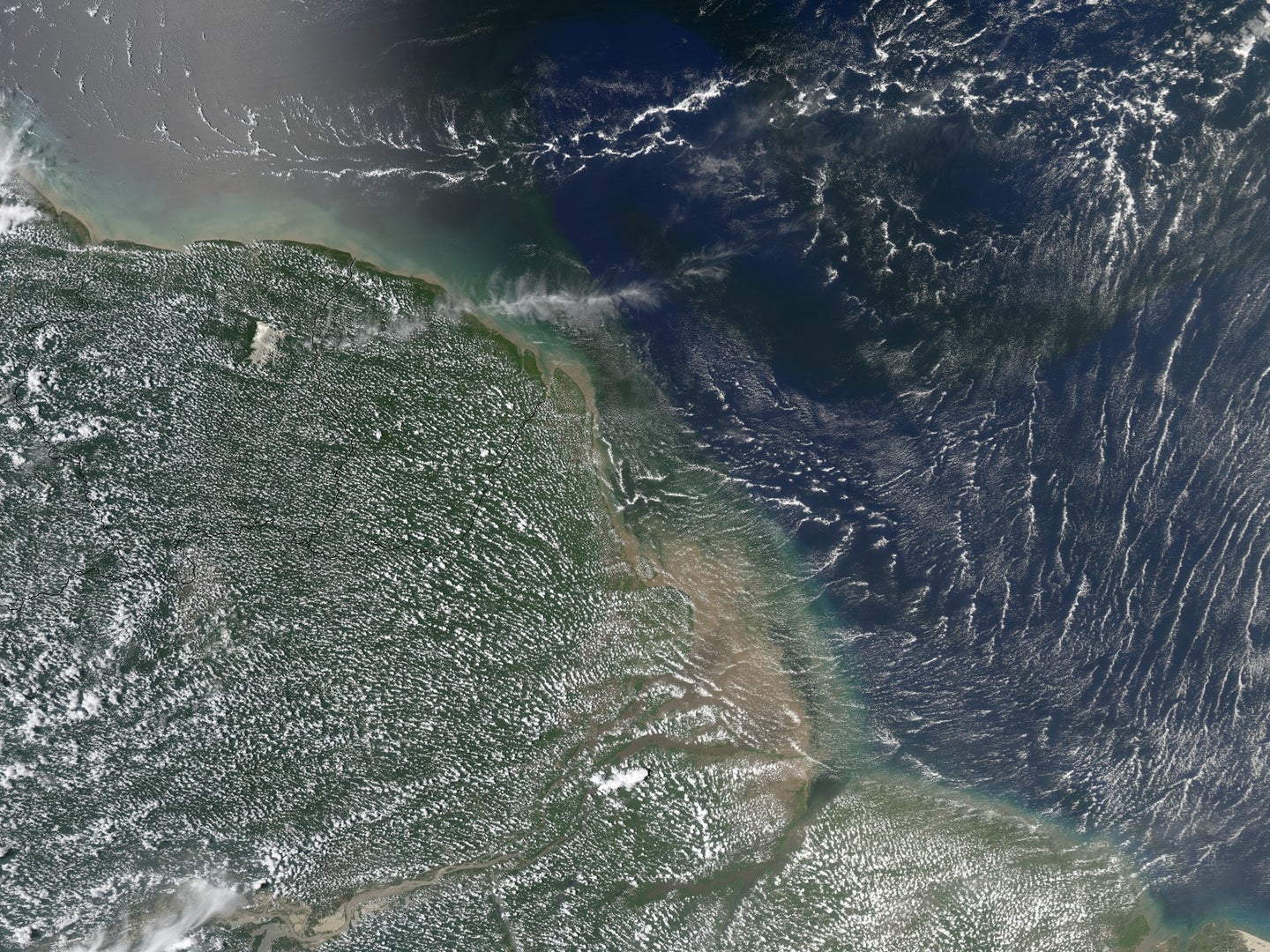 When fresh water meets salt water, energy can be gained, and researchers are trying to capture it.
SHARE

Every second, the Amazon River pours over 50 million gallons of water into the briny Atlantic Ocean. As fresh water swirls and mixes into salt water, there’s energy to be found.

“If you make a really concentrated salt solution, or if you mix things like water and ethanol, you can actually feel them heat up a little bit,” says Anthony Straub, a professor of environmental engineering at the University of Colorado at Boulder. “So there’s enough energy, you can tell, for heating to happen.”

The Amazon is an extreme example, to be sure. But on a smaller scale, scientists think we could take advantage of these natural mixing sites to generate clean, renewable electricity. It’s called “osmotic power,” or “blue energy.” It’s still early days, and it’s barely a minnow next to the wind and solar sharks in the current sea of renewables—but osmotic energy is gaining traction.

Osmotic power takes advantage of osmosis, the movement of water through a semipermeable membrane. What we call salt is actually a chemical combination of the elements sodium and chlorine. Put salt in water, and its sodium and chlorine will dissolve into water and become charged ions.

When fresh water comes into the mix, those ions will try to move from salty water to fresh and even out their concentration. If you force those ions through a special membrane en route, you can harness their energy as they pass.

This technology isn’t limited to places where rivers meet seas. All that’s needed is salty water, fresh water, and somewhere where you can put the two side-by-side. Osmotic power could even create a new purpose for human-created wastewater: the salty brine that leaves desalination plants, for instance, or other salty industrial runoff. And saltwater lakes, such as the Great Salt Lake or the Dead Sea, would do perfectly.

In fact, it was watching the Jordan River enter the Dead Sea that inspired a scientist named Sidney Loeb—a pioneer of reverse osmosis, one way we desalinate seawater—to first deduce that osmotic energy was possible back in the mid-1970s.

It took until 2009 for the world’s first blue energy plant to open, in Hurum, Norway, around 25 miles south of Oslo. This plant harnessed osmosis to generate a humble 2 to 4 kilowatts, enough to power a couple of kitchen appliances. Statkraft, the company behind it, had bold plans to build another, larger plant to power a whole village.

But in 2014, Statkraft shuttered the plant and binned those plans, citing low cost-effectiveness. Just as with any new source of energy, companies have to make sure the energy their plants produce outweighs the energy to make it work—say, to pump in the water you need. It’s similar to why fusion power hasn’t left the lab.

“It’s going to be like a very long-term research mission,” Straub says. “I think it’s … waiting for some other technological developments to happen.”

But Statkraft wasn’t the last to try. In 2014, a Netherlands-based company opened an osmotic plant perched atop the Afsluitdijk, a dike that separates the salty North Sea from the freshwater bay of IJsselmeer. Another firm is currently hoping to do something similar in Denmark.

[Related: To solve global water scarcity, we need to get more serious about desalination]

In theory, if we could install these special membranes in all the rivers on Earth, we could create enough electricity to power whole continents. And as long as we picked rivers that flow year-round, we could generate electricity all the time—without the interruptions that come when wind isn’t blowing turbines, or when solar panels can’t see the sun.

Challenges still remain, though. While osmotic power is far less carbon-intensive than burning fossil fuels, it still has environmental costs. In particular, as blue power plants mix fresh and salty water, they discharge something in between called brackish water. Marine wildlife is sensitive to changes in the salt around it, and some scientists worry this could prove disruptive.

Scientists and engineers building osmotic plants on coasts need to be especially careful. “If you imagine mixing river water and seawater, obviously you’re going to be interacting with environmental systems that are quite sensitive,” says Straub. “You’re going to be in estuaries, and so on.” And those are habitats already vulnerable to rising sea levels and acidifying seas.

Even if you get around that, the same trends that are giving so much hope to the clean-energy transition are in some ways a hindrance to other sorts of power. As solar and wind prices continue to fall, it’s not easy to see osmotic power being able to compete.

“My feeling is that large-scale power generation with this,” says Straub, “is going to take a lot of work.”
Blue energy could still be useful in small-scale situations, though. Remote communities in northern Canada, for instance, hundreds of miles from each other or the power grid, often rely on fossil-fuel-guzzling generators for power. Osmotic power could provide those communities with green energy that’s more feasible in their part of the world than wind or solar power.