The skill could have made it easier for animals to move from water onto land. 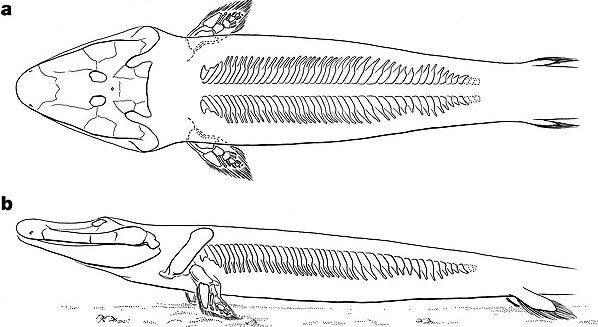 Tiktaalik was technically a fish but also came equipped with a flattened head and distinctive fins, which are more characteristic of an animal that splits its time between water and land. Nature; Daeschler
SHARE

Around 375 million years ago, the ancient fish known as Tiktaalik roseae, equipped with lobe-shaped fins that it could use to prop itself up, scooted through the shallow waters of present-day Arctic Canada. Tiktaalik lived right around the time when vertebrates first made the transition from water onto land, and though technically a fish because of its scales and gills, the animal also had features such as a flattened head and distinctive fins, which were more similar to an animal that splits its time between water and land, such as a crocodile.

Now, scientists have discovered that its skull was adapted to allow Tiktaalik to use both suction and biting while feeding. This kind of strategy could have served as an intermediate step for the earliest animals to crawl onto dry land, the researchers reported on February 1 in the journal Proceedings of the National Academy of Sciences.

“It implies that it’s not just a suction-to-biting transition in water; it’s a little bit more nuanced,” says Justin Lemberg, an evolutionary biologist at the University of Chicago and coauthor of the new findings. “A lot of these characteristic features of early tetrapod feeding could have evolved in water for the sake of feeding in water.”

Most aquatic vertebrates, from fish to whales, use suction to some extent. Many fish have jointed skulls that expand when the animal opens its mouth, drawing in water and food.

However, the movements that produce this suction don’t work very well when used in open air, which is much less dense and viscous than water.

Unlike many fish alive today, Tiktaalik had a flattened skull and elongated snout that would have made traditional suction feeding difficult. However, the fish—which Lemberg’s colleagues discovered in 2004—also had aquatic features such as a full set of gills. “There’s a lot of evidence that Tiktaalik and a lot of other early tetrapods still were very intimately tied to the water,” Lemberg says. While they may have made “terrestrial excursions,” he says, these animals would have needed to be able to feed underwater.

Lemberg and his team initially thought that Tiktaalik might have used crocodile-like snapping motions to eat, given the apparent similarity of their jaws. When they took CT scans of fossilized Tiktaalik skulls, however, “the crocodilian analogy just fell apart,” he says. In crocodiles and their relatives, the roof of the mouth, or palate, is fused to the braincase. But Tiktaalik’s skull had joints between the palate and cheeks and the braincase.

The researchers next turned to the alligator gar, a type of fish whose snout resembles those of crocodilians, hence their namesake. Alligator gars are considered “living fossils” because they haven’t changed much since their first appearance in the fossil record more than 100 million years ago. They snap their jaws together to capture prey, and were thought to be poorly adapted to suction feeding.

However, the researchers realized that the alligator gar has a series of joints that allow it to expand the skull while closing its jaws. When the fish opens its mouth, prey and water are pulled in. The expansion of the skull prevents the water from being pushed right back out—and taking the collected food with it—when the jaws snap shut. Instead, the water is drawn out through the gills. Lemberg and his colleagues used computer animation to confirm that Tiktaalik’s joints would have enabled it to move its skull bones in similar ways to an alligator gar.

The findings suggest that the fishy ancestors of the earliest terrestrial vertebrates could have evolved the ability to bite while still retaining suction feeding. “It could have taken its biting-based feeding system onto land more easily because of a gar-like stage along the way acting almost like a stepping stone from water onto land,” Lemberg says.

He and his team noticed an additional advantage of Tiktaalik’s expandable skull. A few present-day fish, such as the ornate bichir, retain openings called spiracles on the top of their skulls that allow them to breathe in air as well as water. The researchers found that when Tiktaalik slid its palate around, its own spiracles would have expanded, perhaps enhancing its ability to breathe air. This kind of adaptation would have given animals an advantage as they ventured onto land.

One of the bones around the spiracles of early vertebrates eventually became the stapes in the middle ear of humans and other present-day animals. An expandable skull such as that seen in Tiktaalik would also have given this bone freedom of movement from the upper jaw.

“This might be setting up that bone for its eventual incorporation into the hearing mechanism of these early tetrapods,” Lemberg says.