Rough Sketch: “We Made a Robot That Moves Like a Person”

Theresa Klein talks about Achilles, the first machine to move in a biologically accurate way. 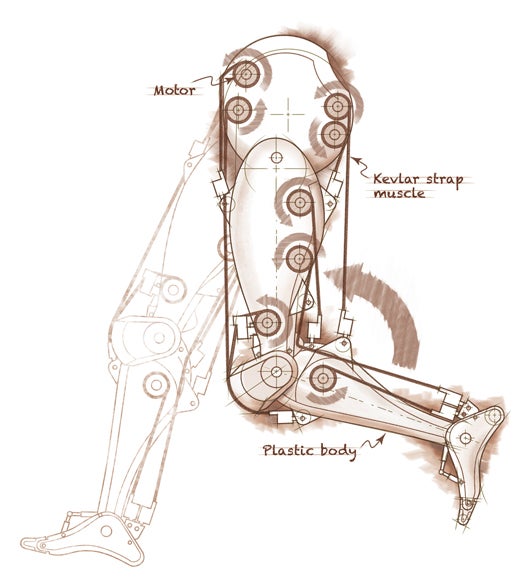 “Our robot, named Achilles, is the first to walk in a biologically accurate way. That means it doesn’t just move like a person, but also sends commands to the legs like the human nervous system does.

Each leg has eight muscles—Kevlar straps attached to a motor on one end and to the plastic skeleton on the other. As the motor turns, it pulls the strap, mimicking the way our muscles contract. Some of Achilles’ muscles extend from the hip or thigh to the lower leg so they can project forces all the way down the limb. This allows us to put most of the motors in the hips and thighs. Placing them up high keeps the lower leg light, so that it can swing quickly like a human’s lower leg.

In people, neurons in the spinal column send out rhythmic signals that control our legs. It’s like a metronome, and sensory feedback from the legs alters the pace. Your brain can step in to make corrections, but it doesn’t explicitly control every muscle, which is essentially why you can walk without thinking about it. For our robot, a computer program running off an external PC controls movement in a similar way. With each step, the computer sends a signal to flex one hip muscle and extend the other. The computer changes the timing of those signals based on feedback from the legs’ load and angle sensors. A similar control system handles the lower muscles.

Modeling human movement has applications outside of robotics. It could also help us understand how people recover after spinal-cord injuries, for example. But our robot is still a very simplified model—it has no torso and can’t handle complex terrain. Initially, we also had a problem with its feet slipping. We thought about different types of rubber to give its feet more grip but eventually realized a solution already exists. Now, the robot wears a pair of Keds.”

—Theresa Klein, an engineer at Orbital Sciences Corporation, created Achilles while she was a graduate student at the University of Arizona