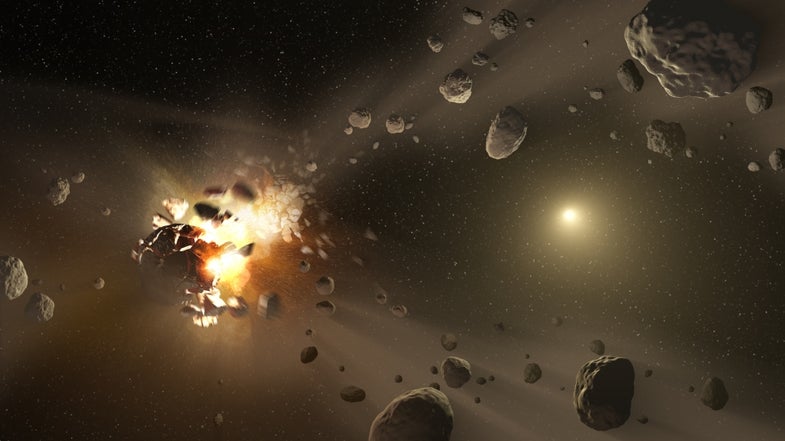 Water is everywhere on our planet. If it’s not crashing against the shore, it’s pounding on the roof, or dripping from the faucet, or pooling right in that spot where you just stepped. But how did all that water get here?

It’s a question that has preoccupied planetary scientists for years. Did planets like Earth, Mars, Venus, and Mercury form dry out of the dust and heat of the inner solar system, only to be drenched in water delivered from ice-laden comets later on? Or did drier asteroids and asteroid collisions bring the wet stuff?

“Water is critical to life as we know it, and it’s also essential to the evolution of planets. Water changes the way rocks behave, so the timing of when water arrives on Earth really affects its geological evolution,” says Terik Daly, a planetary geologist. “We’ve known for awhile that asteroids and comets carry water, and that’s probably how water came to Earth. But the details of that process have kind of been a black box.”

Computer models are starting to give us answers to those questions. But the models only go so far. To really understand how this water delivery system works, you need to watch it happen. But meteorite strikes are notoriously unpredictable, so researchers decided to create their own with the help of a super-sized gun at NASA’s Ames Research Center. The research, led by Daly, was just published in this week’s Science Advances.

“Impact models tell us that impactors should completely devolatilize at many of the impact speeds common in the solar system, meaning all the water they contain just boils off in the heat of the impact,” study co-author and geoscientist Pete Schultz said in a statement. “But nature has a tendency to be more interesting than our models, which is why we need to do experiments.”

NASA built the Ames Vertical Gun Range in the 1960s to help researchers working on the Apollo program who were trying to figure out what the surface of the moon was like. Scientists still use it to slam things together in order to get a real-world look at what is typically only modeled by computers.

To simulate a water-rich asteroid slamming into the surface of another asteroid, the team fired pellets of rock no larger than a bb pellet into a thin bed of pumice powder. Pumice is a glass that forms when lava cools very quickly, and the powdery substance might be similar to the surface of an asteroid. They superheated the pumice for an hour and a half at temperatures over 1500 degrees Fahrenheit to bake off any water within.

Delivering the water to this dry powder were pellets of serpentine, a mineral found on Earth that already has plenty of water tied into its molecular structure—it’s also found in meteorites called carbonaceous chondrites.

The vertical gun is loaded, the tray of ultra-dried pumice lined up underneath it, and then… bang! It’s all over in a second.

The serpentine pellet slams into the pumice surface at over 11,000 miles per hour, tearing through the thin mylar tray holding it up. Bits of the rock fly apart, and the impact is enough to melt parts of both the rock and pumice, creating a glass. And that glass held water.

Instead of simply boiling off in the impact, some of the water stuck around. Part of it stayed trapped in bits of the projectile blown apart as it hit the pumice surface, but plenty of it got mixed in with the molten glass. If that had been a real asteroid impact, it means that there would still be plenty of water delivered to the target.

For example, the geoscientists know that on the Moon the impact speeds are a lot higher than what they do in the lab. And they also know that impacts that happen at higher speeds produce more melted material. If the impact melt on the Moon traps water in the same way as the melt in the experiments, then the experimental mechanisms should hold up on even larger scales.

Ideally, Daly and colleagues would like to take a closer look at asteroids in the solar system with signatures of water on their surface, to see if the percentage of water trapped there matches their experimental results. It could help researchers understand some of the basic dynamics of the solar system today, and also give some insights into how our solar system and planet formed.

“The whole question of the origin of water and where it came from and how it got here is really essential to understanding the formation and evolution of Earth, and on the largest scale, how it got to be the place where we are today,” Daly says.