How Science Has Battled Natural Disasters

From the Popular Science archives, the hurricane house, the seismograph camera, the forest-fire-fighting dirigible, and more. 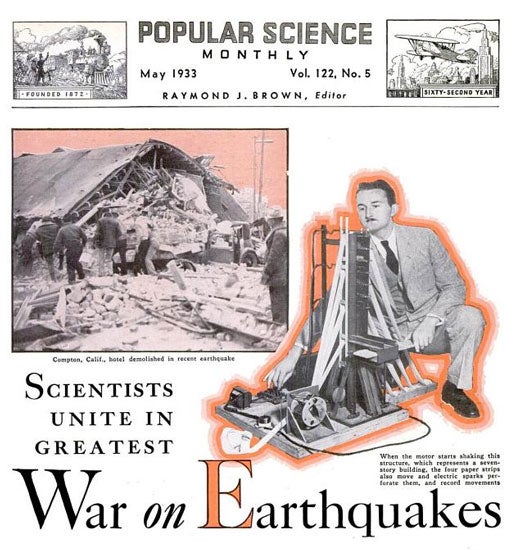 On August 29, 2005, Hurricane Katrina made landfall in southeast Louisiana. The Category 3 storm flooded 80 percent of the city of New Orleans and killed at least 1,836 people in the U.S. Eight years later, residents of destroyed neighborhoods are still struggling to rebuild. As sad as it is to admit, most disaster-prone regions have had to learn from tragedy in order to improve their defenses against natural destruction. We’ve collected early examples such technology from the Popular Science archives. We begin in the fall of 1919, just after World War I, when dirigibles glided across national forests in search of fires. After the war, scores of airplanes and zeppelins were commissioned to join horseback-riding firefighters to extinguish the flames consuming our trees. Meanwhile, on the other side of the world, Japan was about to suffer an earthquake that would kill an estimated 140,000 people. After the 1923 Great Kanto Earthquake and tsunami destroyed Tokyo and Yokohama, scientists collaborated to devise methods that would reduce the body count in future disasters. Japanese scientists simulated earthquakes on scale models of buildings to see what kind of engineering held up, while an American professor proposed installing ball bearings within houses for stabilization. Meanwhile, laypeople did everything they could to protect themselves from disasters. One architect built a teardrop-shaped “hurricane house” that turned with the wind during a storm, while businesses sold the all-steel cyclone cellar, which could be delivered in one piece, no assembly required. Simply dig a hole in your front yard, embed the cellar below, and hop in when the winds begin to stir.

In 1919, visitors to national parks were curious as to why airplanes and dirigibles were flying overhead, especially since the war had already ended. Unbeknown to most, forest rangers were being trained in aviation so that they could help locate forest fires. Fighting fire was a team effort; watchers, or men stationed at strategic lookouts, would alert headquarters by telephone, so they could dispatch a group of men to extinguish the flames. Since watchers’ visions were limited, the Forestry Bureau commissioned dirigibles inflated with the new non-inflammable helium to patrol parts of the forests that were blocked from view. Additionally, air scouts could contain the fire with extinguishing bombs until the regular ground crew arrived. If that didn’t sound novel enough, aircraft were tentatively slated to receive wireless sets to improve communication between pilots the ground.

While today’s seismometers employ electronic sensors, amplifiers and a recording device (most commonly a computer), in the early 20th century, people relied on a device that used a stylus to trace patterns on drum covered in smoked paper. Dr. A.T. Jaggar and Dr. Arnold Romberg, of the Kilauea Observatory in Hawaii, proposed updating the system by using a machine that registered seismic movement photographically. “The lamp was set up at a distance of 150 centimeters from the end of, and in line with, though slightly above, the arm of an Omori 100-kilogram horizontal pendulum, the tip of the arm being fitted with a magnetized horizontal needle. An ordinary light mirror, with a diameter of twelve millimeters, was then firmly fastened to a vertical taut silk fiber, held on a post standing on a concrete table: while a second magnet was attached to the back of the mirror in such a manner that it lay at right angles, with its north pole adjacent to the south pole of the arm magnet.”

The Great Kanto earthquake with a magnitude of 7.9 devastated the Tokyo-Yokohama areas, leaving 140,000 people dead. The tsunami that followed ruined 155 houses and left 60 casualties. Although scientists knew that they couldn’t prevent earthquakes, they knew they could do something about the body count. Professors B. Mano and A. Inokuty of Japan built a large, platforms table that would shake models of buildings to see if they would hold up. Meanwhile, Dr. Bailey Willis, emeritus professor of geology at Stanford University, stated that we, not earthquakes themselves, are to blame for the death and destruction following them. Poor building design, fires, and our inability to forecast earthquakes all contribute to needless deaths. A giant ball bearing within houses and foundations would solve the problem. He also posited that plate tremors develop below the earth’s surface for months before they turn into earthquakes. If we could find a way to monitor the planet’s interior, we should be able to predict when an earthquake will occur. Although that didn’t happen, his idea for ball bearings did come to pass when engineers installed a tuned mass damper in Taipei 101.

George E. Merritt, of the Bureau of Standards in Washington, D.C., surmised that we could predict earthquakes by peering deep within the earth’s crust. Several years earlier, Japanese scientists claimed that a tilt took place within the earth’s crust months before an earthquake occurred. Using that study, Merritt created his tiltmeter, which could reportedly note any changes in the earth’s crust within one-tenth of a second. To use it, you would install parallel reflecting surfaces (a plate of oil upon a quartz plate) deep within a well. Light from a helium lamp would reflect the fluid and transmit a beam of light, which would change when the earth tilted. You would then measure the angle of misalignment to figure out if it were dramatic enough to cause an earthquake.

After the 7.3 earthquake in Lompoc, California reduced towns to rubble, scientists at Caltech, M.I.T., and Stanford University endeavored to improve building design. Tiny models of skyscrapers mounted on platforms supported by steel springs functioned as quake simulators, which revealed weaknesses in construction. At Stanford and Caltech, tiny instruments would measure the damage on models while they were subjected to “mechanical quakes.” The collection of data allowed scientists to assist architects by devising mathematical formulas for building more elastic structures. The famed architect Frank Lloyd Wright chipped in as well, recommending structures with a low center of gravity, a shallow foundation, and a light roof.

Long before bomb shelters became a household standard, all-steel, tubular cellars almost became the norm for people living in the tornado belt (we should mention that while the title says “cyclone,” the article actually refers to tornados, not hurricanes). The apocalyptic-looking structure would be shipped in one piece, no assembly required. The cellars, which could accommodate 12 adults, came with two ventilators, sets, and a steel stairway leading to above ground.

As the decade wore on, earthquake tests became more sophisticated. Researchers at the United States Coast and Geodetic survey hauled portable “earthquake machines” to various buildings so that they could measure the “pitch” of a structure — that is, the frequency at which it would collapse. This data not only helped them locate the weak areas of buildings, but it let them understand how buildings behaved during an earthquake. Why did some buildings fail while others stayed upright? Generally, the better “tied-together” all elements were, the more likely it was that a building could stay up. One engineer suggested that taller structures be built with a diagonal bracing that could collapse during an earthquake, throwing the building out of sync with the tremors. Others recommended building the lower flowers with elastic material, which would absorb the energy released by a quake. At any rate, the availability of new lightweight materials, like concrete made of pumice (instead of gravel), meant that engineers were better equipped to construct earthquake-proof buildings.

A combination weather vane house? Why not? Edwin A. Koch, a New York City architect, built his teardrop-shaped home on circular tracks. During bad weather, the house would rotate and align itself with the wind (on good days, you could face it toward the sun). The entire house was mounted on a wheels, which ran on three separate tracks. One was located at the pointed tip of the structure, another was located just under the exterior walls, and the third lay beneath the interior of the building. Water and sewage pipes were located beneath the house’s axis, while electricity came in through the inner track. To rotate the house, simply push a button on the central control board, and relax knowing that your home won’t be battered away by storms.

Nothing makes you feel helpless like being at the mercy of nature’s cruelty, which is why the U.S. Weather Bureau proposed helping eliminate that situation by controlling the development of hurricanes. Weather experts would steer hurricanes away by seeding its clouds with chunks of dry ice. The reaction would release energy from the storm and redirect its path into — ideally — the open sea. That summer, the National Hurricane Research Project planned to test this method on storms headed toward the Caribbean. Not surprisingly, the process required a load of equipment. Rockets would carry cameras to photograph the hurricane while B-50s and a B-47 would drop the pellets and monitor the ocean for activity. A hurricane beacon (a.k.a. a radio-equipped balloon) would enter the eye of the storm so that ground observers could track it.

After 1938’s Great New England Hurricane and 1954’s Hurricane Carol flooded Providence, Rhode Island, authorities decided to take action against future disasters. Up came the Fox Point Hurricane Barrier, which stretched across the Providence River to protect downtown areas from massive flooding. The wall comes with gates that block storm flooding, while a pumping station releases water back into the bay. Once the emergency warning is lifted, the gates open, the pumps stop, and life can go on as usual.