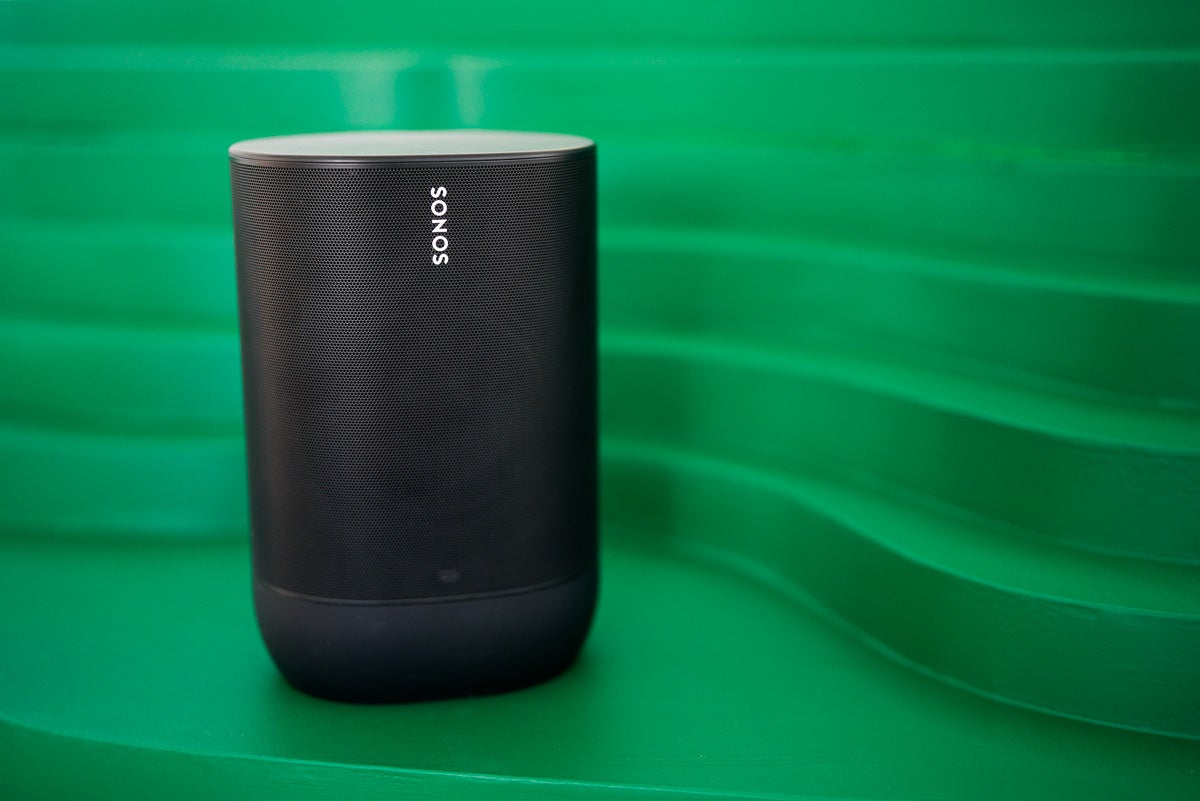 Setting up some Sonos speakers like the Beam sound bar involves a calibration process. You walk around your room holding your phone as its built-in microphone records and analyzes sound from the speaker. This process informs the speaker about the shape and audio qualities of your room so it can tweak its performance to cut down on unwanted distortion and echoes. With a portable speaker, like the new $400 Sonos Move, that process doesn’t make much sense. You can’t exactly create an accurate sound profile for your backyard, and even if you did, you’d just end up moving it later.

To address this problem, Sonos tweaked its Trueplay calibration system to listen to its own sound output using its array of four built-in speakers, and automatically adjust its playback to fend off music-ruining distortion. Last week, at a preview event in NYC, a Sonos rep put the Move inside of a deep bookshelf—one of the worst possible spots for a speaker because of all the reverberations—and started playing. After a few seconds, the sound audibly changed once it realized that the echoes were killing its audio quality.

This isn’t a totally new concept—other speakers like the Google Home Max smart speaker have similar feedback systems that allow them to tweak playback settings to accommodate imperfect placements. But, the Sonos solution is as elegant as you’d expect considering the company’s track record for making really awesome stuff.

There’s more to the Move than just the AI-powered tuning, however. Here’s a first look and listen.

The Move is the first Sonos speaker that works like a true Bluetooth speaker in addition to its typical Wifi connectivity that you’d expect to find. Despite the new connectivity option, Sonos says that you shouldn’t expect degraded sound performance over Bluetooth as compared to Wifi because it’s using the same hardware, but tweaked codecs. Listening to the speaker in an open environment, I didn’t notice a difference, but the true test would require a more controlled listen.

As for the speaker hardware, the Move has a single mid-woofer that aims straight out from the front of the speaker, while a single tweeter fires straight down into a shaped plate that distributes the high-end evenly. According to Sonos, this arrangement gives the Move a more directional soundstage instead of blasting music in every direction. The idea is that you can put it against a fence and pump music into your own yard while keeping things relatively quiet in your neighbor’s yard.

The built-in battery is rated for 10 hours of playback on a charge, but that obviously varies depending on what you listen to and how loud you crank it (as well as other variables like temperature). 10 hours isn’t exceptionally long when some competitors promise 12, 16, or even 24 hours of playback on a charge, but cramming in more battery would increase the already-chunky six-pound speaker. It can, however, charge via USB-C, so if you have a power bank for your smartphone or tablet, it can provide the Move with some extra playtime.

Typically, the speaker charges while sitting in its ring-shaped base, which charges via an electrical contact. It’s an elegant alternative to a flat base on which you can plop it, and it’s considerably better than having to plug in a cable. Sonos says the battery is designed so sitting in the charger all day won’t reduce its overall efficacy down the road, which is the case with some cells. On a very bright note, however, the battery in the Move is replaceable, so after it stops taking a full charge (Sonos says to expect about three years of life), you can get a new battery and swap it out. It likely won’t be cheap, but it will be more affordable than getting a whole new speaker.

Using the Move feels like using a typical Sonos speaker. It works with the same array of streaming services through the Sonos app and it has both Google Assistant and Amazon Alexa built-in, so you can control it with your voice via the four-microphone array.

Because it’s meant to go outside, Sonos ruggedized the Move enough to earn it an IP56 rating, which means you can’t chuck it into a pool and expect it to work, but it’s more than tough enough to survive rain, splashing, or even sand from a day at the beach. According to Sonos, making it fully waterproof would have compromised the overall sound quality too much.

The black finish is slightly different than the typical Sonos black. The new look is called Shadow Black and it’s slightly lighter than comparable models in order to help manage heat better and prevent the sun from nuking the speaker when you take it out for the day.

At $400, it’s undeniably pricy, but Sonos hopes it justifies the cost by pulling double duty as part of a whole-home music system and as a truly portable Bluetooth speaker. And since it weighs six pounds, it seems like Sonos has left room in the line for something even smaller and more portable down the road, though, the company didn’t disclose any plans for future speakers. Sonos did make it clear, however, that this is a space in which it plans to do more development and release more products.