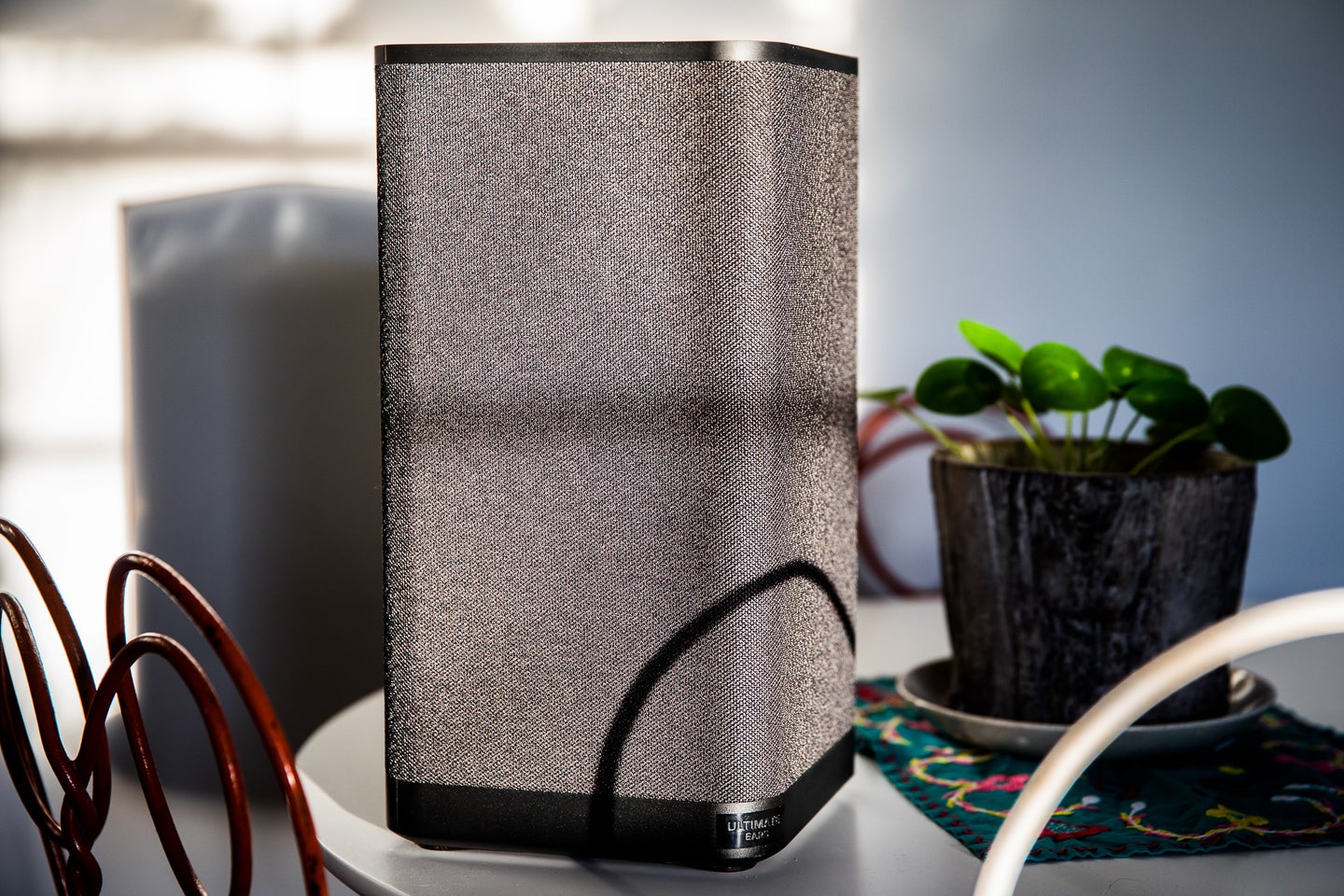 Venture into the stereo department of any brick-and-mortar department store and it feels like entering a time warp. So many of the systems seem stuck where they were decades ago, with neon lights that glow and flash from behind oversized buttons and dials. Exaggerated grills and tubes promise mega bass in all caps. They shout “PARTY” louder than an obnoxious teenager in an ‘80s movie.

The new Ultimate Ears Hyperboom speaker is built for the same party rocking, neighbor-disturbing purpose, but in a much more modern package. Despite its monolithic exterior, there’s a whole lot of punch inside.

The Hyperboom continues UE’s excellent lineup of wireless speakers, all of which have some form of the word “boom” built into the name. The new model, however raises the stakes considerably when it comes to power and volume. The monolithic speaker stands 14.3-inches high with a footprint that’s 7.5-inches square. It weighs 13 pounds, so it’s not meant for throwing into a backpack. That’s a far cry from the previous UE models, most of which you could dangle from a carabiner or even stick in your car’s cupholder.

All of that space inside the Hyperboom leaves lots of room for audio hardware. Inside, a pair or woofers and a pair of tweeters (both pairs face outward at a 90-degree angle from the front of the device) handle the bulk of the audio performance. On the rear sides, you’ll find resonators that push sound behind the speaker. The result: it’s loud. Inside my roughly 12 by 15-foot living room, I couldn’t get it much past half volume before it got a little uncomfortable.

In my backyard, I stood roughly 50 feet away from it and still didn’t need to crank it to max volume to hear the music at a totally reasonable level. It packs punch enough to fill up most outdoor spaces.

The onboard microphone enables UE’s adaptive EQ technology, which listens to the real world output the speaker creates and adjusts the EQ automatically for optimal sound. This kind of automated tech is increasingly important and common for speakers meant to be moved around. Compared to competition like the Sonos Move, the UE system seems a little less advanced (the Sonos speaker has a more robust microphone array for analyzing playback), but my testing made it seem unlikely that you’ll fully stump the UE speaker. Even as the Hyperboom adjusts, it does so gradually and regularly so you don’t get a sudden shift in sound quality after moving it.

Unlike some of the other UE speakers, you won’t find Alexa or any other smart assistant living inside it to answer your voice commands. You’ll have to link up with Bluetooth if you want to crank tunes through it as it’s not always connected via Wifi like an Alexa speaker.

Because it’s a party speaker, up to four people can connect their phones to the device at once. You can select who gets control over the playback by using the app or by pressing one of the buttons on the top of the speaker itself. A light indicates which user (they’re numbered 1through 4) has the reigns. It’s a system that still requires some coordination and cooperation between guests, but it’s elegant in its simplicity and it worked as promised during testing.

It’s not fully waterproof, like some of its siblings, so you can’t dunk it in the pool, but it is IPX8 rated against splashes and other typical party accidents like spilled drinks or splashed pool water. The rubberized top even has a small lip around its exterior edge because UE knew people would inevitably set drinks on it.

At 13 pounds, it’s not light or compact for carrying around. A sturdy, rubberized handle slides out from the back of the speaker, which makes it more manageable, but it’s easier if you have big hands. When I asked my daughter to carry it inside, she opted to cradle it in her arms like a big, musical baby. So, while it’s portable, it’s best for situations where you’re going to bring it to a place, then plunk it somewhere for the duration of your celebration.

UE spent a lot of time researching materials for the feet because early prototypes actually moved around during playback due to heavy bass. Then, making the material too tacky ran the risk of leaving marks on floors and furniture like early versions of the HomePod seemed to do. Even after long periods of loud playback, the Hyperboom stayed in place and didn’t mark up the floor or shelf once they landed on the right materials.

All the ports reside behind a sturdy rubber flap. You get a service port, a USB-A port for charging smartphones and other devices off the Hyperboom’s built-in battery, an optical audio out, and a headphone jack in case you don’t want to connect via Wi-Fi. That’s a lot more options than you get with the smaller versions. And while the output charging is a nice feature, the USB-A connection may seem dated down the road as USB-C continues its march toward ubiquity.

The battery is rated at 24 hours of playback, but that can vary wildly depending on the type of music you listen to and the volume at which you play it. If you want to sit inside and listen to podcasts at a reasonable volume, sure, you might get 24 hours out of it. If you’re blasting out bangers Spring Break style, you should only expect a handful of hours before things go quiet. I let it play for four hours in a row outside in chilly conditions at moderate volume and still had plenty of juice left, so it will likely outlast your party.

At $400, the Hyperboom isn’t cheap. The Sonos Move checks in at the same price and it offers a more flexible overall experience, with its smart assistant compatibility and its simple charging base for when you’re using it inside. The UE, on the other hand, offers considerably more power and a more durable overall design. The lack of smart assistant and Wi-Fi connectivity may also be a positive if you just want something that mimics a direct connection.

If your yard isn’t huge or you plan to take your speaker to a lot of places, something like the Megaboom might be a better fit, especially since it’s considerably cheaper. But, there’s something undeniably satisfying about the sheer volume and oomph you get out of the Hyperboom. Hopefully your neighbors have similar taste in music.