These Speakers Use Ultrasonic Waves To Cut Through The Noise 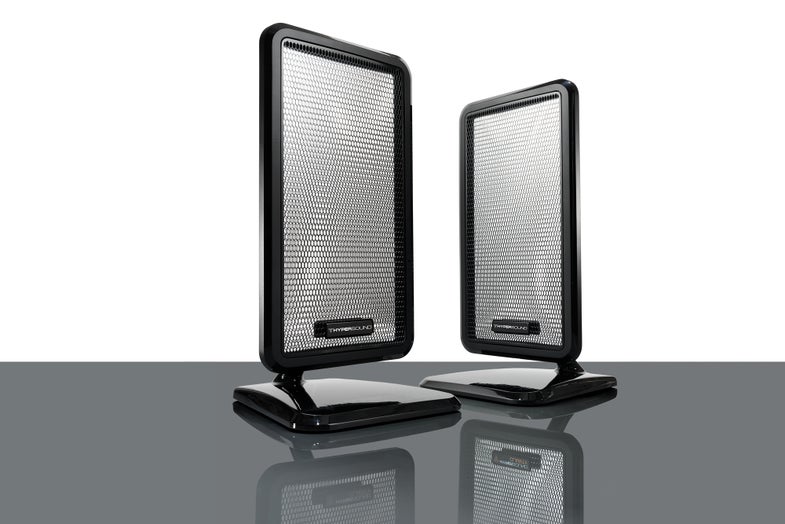 These speakers use laser-like ultrasonic waves to make your music easier to hear, even through loud ambient noises. Brian Klutch
SHARE

Everyday speakers—whether they’re in a cellphone, TV, or radio—scatter sound waves as soon as they leave the cone. A single wave can bounce off dozens of surfaces, slamming into other signals and degrading along the way, before reaching your ear in a muddled mess. Adding to this audio chaos, most midrange TVs only emit sound from rear or downward-facing speakers. So turning them up just doesn’t help. Gamers and TV obsessives often turn to soundbars and directional speakers for relief, but even those don’t offer a true high-fidelity fix.

HyperSound Clear speakers aim sound waves directly at a listener using a tightly focused beam. It uses ultrasonic waves, which don’t disperse as quickly or easily as standard sound waves. Embedded in that signal is high-fidelity audio with zero disruption. That means a movie’s epic surround sound can be directed straight at your ear—just like a laser. HyperSound speakers were designed for the hearing impaired, and like hearing aids, they must be tuned by a doctor. However, in 2014, gaming audio giant Turtle Beach merged with HyperSound’s parent company, raising hopes in the gaming world that laser-focused high-fidelity will be coming to Cheetos-crusted couches one day soon.

This article was originally published in the August 2015 issue of Popular Science, under the title “Speakers That Cut Through Noise.”