The Sonos Beam is a great soundbar, but not yet an awesome listener 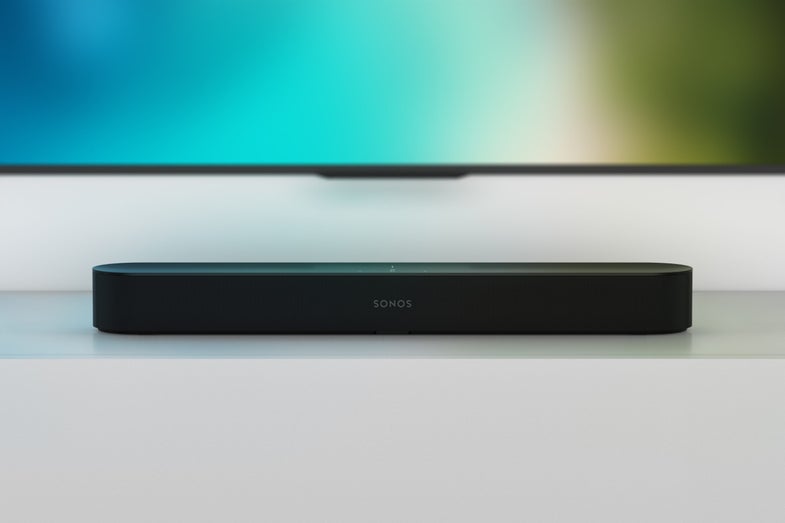 Ditching a TV remote for simple voice commands sounds great in a lot of circumstances. And, with a little help from Alexa (and some other digital assistants down the road), the Sonos Beam Soundbar comes as close to executing that as anyone has so far. And while the Beam won’t let you toss your clicker just yet, it’s still one of the best home audio devices around, even with its $400 price tag.

What is the Sonos Beam?

The Beam is the latest in the Sonos series of speakers meant to pull double duty, handling both music as well as the sound that comes from your home entertainment center and TV. It’s the smallest and cheapest option in the Sonos lineup to handle that kind of task, sliding in under both the Playbar and the Playbase. It ties in seamlessly to the Sonos multi-room wireless audio system if you already have previous speakers.

Like the Sonos One speaker, the Beam claims to be agnostic when it comes to digital assistants, with Alexa built-in, the Google Assistant coming, and Siri already working in a limited capacity.

Put simply: the Sonos Beam sounds great. The bass booms without distorting, and the highs cut through nicely (though, sometimes a little too much). I ran it through everything from Run the Jewels to Cannibal Corpse and it didn’t flinch.

When you set up the speaker, the Sonos app guides you through the process and “listens” to the speaker as you walk around your space to optimize playback. I tried it in two rooms, one small, and one really small, and didn’t encounter any problems. If you have little rooms, however, you’ll probably find that you never really need to crank the volume above 40 percent.

The $400 Sonos Beam is lacking a few home audio features, most notably Dolby Atmos, which is currently a popular option for mimicking surround sound in a Bluetooth soundbar. If you’re looking for an immersive sound that comes from every angle, then this probably isn’t the choice for you.

One hiccup I ran into during setup was getting this Sonos soundbar to work with my TV remote. I use an LG TV, which doesn’t use an infrared remote, but rather a clicker that syncs via Bluetooth for additional features. Setting up volume control with a typical IR TV remote is easy, but I had to chop through a few extra steps with a little trial and error before I got things working.

As a digital assistant

Right now, you can use Alexa as a voice assistant; it can even issue a couple basic TV commands if you hook it up to your set via HDMI-ARC, a port that most current model televisions come with. Google Assistant is on its way, and you can use Siri now, but only through the app.

Alexa can handle standard requests, but if you want to ask for home theater tasks like playing specific shows, you’ll have to pair it with one of Amazon’s Fire TV devices.

That’s really the spot where it seems like the Sonos Beam has work to do. You can do some TV navigation, but you’ll still need your remote. The promise of full voice navigation feels frustratingly close, and Sonos sound bar does it better than most at the moment. I would fully expect to see more functionality coming down the line via firmware updates that make this truly killer when it comes to navigating via voice.

When I played music using Alexa through the wireless soundbar, it doesn’t mix with the sound from the TV, which is fine most of the time, but that’s often how I enjoy playing console games. I went back to using my Google Home speaker when I was playing Xbox. It’s a corner case, but if this is your only Alexa or home theater speaker option, you may run into conflicts.

Should you buy the Sonos Beam soundbar?

While there are a few bumps in the digital assistant road, the Sonos Beam soundbar is still an excellent speaker bar for both home theater and music, especially if you’ve already bought into the Sonos infrastructure. Setup is simple, the sound is excellent, and the package looks very slick.