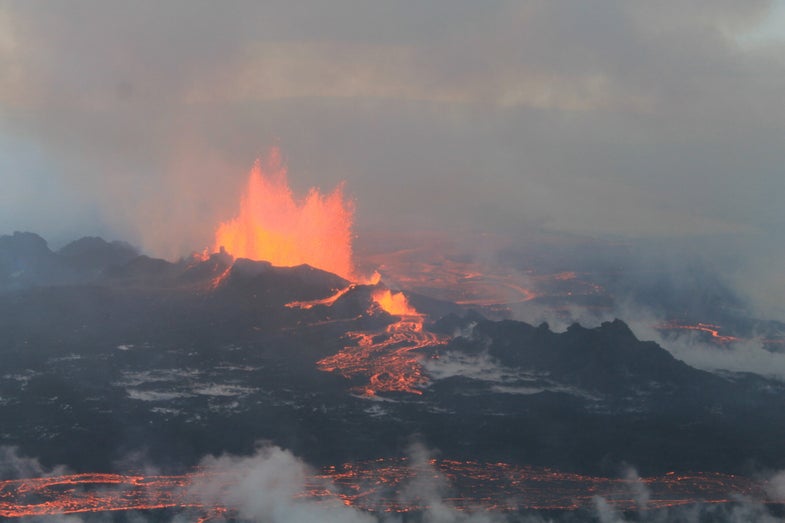 Q: Can we predict volcanic eruptions?

But… it would be really great if we could. Researchers are looking for all kinds of variables (heat, pressure underground, gasses released, tremors, etc) that might indicate that an eruption is immanent. The United States Geological Survey (USGS) and other organizations monitor volcanos constantly, because while there are tell-tale signs that magma is on the move inside a volcano, volcanoes don’t follow a set script. They can still erupt unpredictably after a period of calm, or subside back into slumber after rumbling a bit.

A new paper published recently in Nature Geoscience makes the case that in order for us to accurately predict when a volcano might erupt, we essentially need to do a background check on the volcano in question and piece together a pattern of behavior. By analyzing rocks that were erupted by the Italian Campi Flegrei volcano long ago, the researchers can piece together what kinds of signs might best indicate a future eruption. It’s CSI: Volcano.

On a broader scale, this is nothing new. One of the basic tenants of geology is uniformitarianism, the idea that “the present is the key to the past“. The basic physical processes at work in the world haven’t really shifted in the past 4.5 billion years: wind and water erode rocks as volcanos spew out lava and tectonic plates separate and crash into each other. By looking at what’s happening in the world around us, we can understand what happened in the past.

That brings us to the corollary to uniformitarianism, which notes that the past is also the key to the future. So to understand what might happen at a particular volcano, you might need to look back at that volcano’s past.

In this case, researchers found gas bubbles trapped in crystals of a mineral called apatite. Their analysis showed that the gases entered the magma (molten rock under the ground) pretty late in the game, after a lot of magma had already built up, but just days or weeks before the eruption. This could mean that looking for a sudden buildup of gas at this particular volcano could be a good way of figuring out when it might erupt, and give the people living nearby a chance to evacuate.

This doesn’t mean that looking for gas buildup will indicate an eruption at all volcanoes around the world. In a blog post, study author David Pyle writes:

Just to reiterate: there is currently no way to predict volcanic eruptions. But, we sure are hoping that one day, we might be able to get a little bit of an advanced warning.