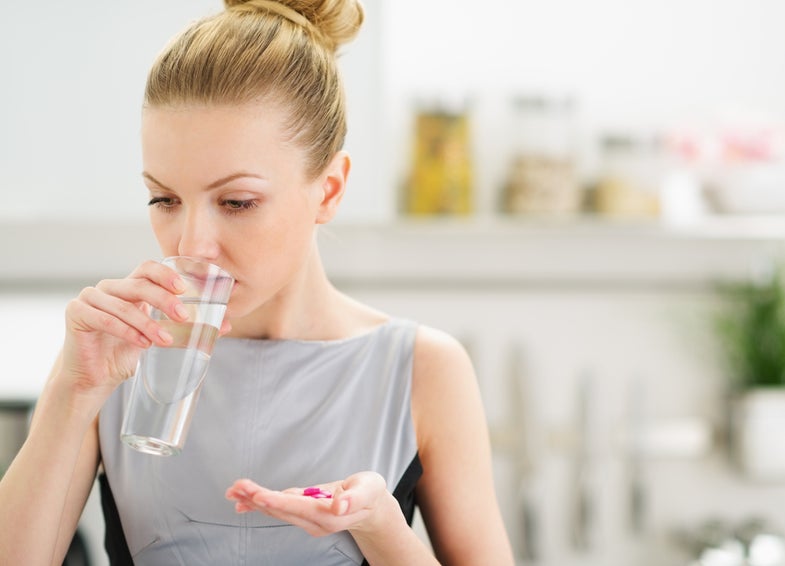 B vitamins are often sold with the promise of boosting flagging energy levels. But men who smoke might want to skip them, according to a new study in the Journal of Clinical Oncology. While smoking kills some six million people a year, the study found that men who smoked and took large doses of vitamins B6 or B12 significantly increased their risk of lung cancer.

The men most likely to increase their risk of lung cancer were consuming a lot more vitamin B6 and B12 than you’d find in your typical multivitamin. Multivitamins typically only contain the Recommended Dietary Allowance (RDA), a rough estimate of how much the average American needs to consume to ward off a vitamin deficiency. But the men who showed the greatest increased risk for lung cancer were exceeding the RDA by a lot—15 times more than the RDA for vitamin B6; 20 times more than the RDA for vitamin B12. And while B vitamins are important in helping the body make new DNA and repair existing DNA, they also interact with the pathway that allows lung cancer to spread.

“When you disrupt this pathway, it stands to reason that there can be consequences,” says lead author Theodore Brasky, a researcher at The Ohio State University Comprehensive Cancer Center.

For a long time, the consequences researchers focused on were the health risks associated with too few B vitamins, not too many. A lack of folic acid (vitamin B9) in pregnant women, for example, is associated with poor neurological development of the fetus. There wasn’t much concern that we would over-consume B vitamins. Unlike, say, vitamin A or vitamin D—which both get stored in our fat and can lead to dangerous overdoses—B vitamins are water soluble. Under the worst-case scenario, many researchers thought, vitamin popping Americans were simply peeing away their paychecks.

That theory began to change when studies released in 2009 and 2010, including one clinical trial, suggested that B vitamins had a potential for harm—especially when it comes to lung cancer. But the results of those studies weren’t consistent. The clinical trial originally set out to determine the impact of vitamins B6, B9 and B12, both alone and in combination, on heart disease—not lung cancer. It was only when the researchers analyzed the long-term data that they spotted an increased likelihood of lung cancer in patients consuming B9 and B12 together. The researchers didn’t separate out men and women, and they couldn’t go back to determine whether B9, B12, or the combination of the two was to blame. But those studies inspired Brasky and his colleagues to pull data from the SEER cancer registry for more information.

The SEER (Surveillance, Epidemiology, and End Results) database, which began in 1973, collects and publishes data related to cancer incidence and survival from people based across the United States. As part of the program, participants answer detailed information about diet, health and lifestyle. Brasky and his colleagues drew on data from the VITamins and Lifestyle (VITAL) Study, which is specifically designed to look at the role—good or bad—that supplements play in determining cancer risk.

“It was designed exactly to answer these questions,” says Brasky.

VITAL participants fill out questionnaires that delve deeply into their dietary supplement habits, including multivitamins, minerals (like calcium and magnesium), and non-vitamin, non-mineral supplements like black cohosh, ginseng, or gingko biloba. They’re also asked questions about dosing, allowing the study to average daily intake over 10 years. So, if a participant took a multivitamin with 10 micrograms of B6 per day, but they’d only taken it for a year, this would be represented as an average of 1 microgram per day in the study.

Multivitamins were not associated with risk, but individual supplements—which tend to be sold at levels much higher than RDA—were. Higher doses of Vitamins B6 and B12 seemed to be correlated with an increased risk of lung cancer among men who smoke.

There are some caveats. The first is that the study only looked at individuals between the ages of 50 and 76, which means we don’t know if the effects replicate in younger people. This is also an observational study—participants had to report their own habits, so we have to consider that they might have over- or underestimated their supplement usage. And while there are eight B Vitamins—B1 (Thiamine), B2 (Riboflavin), B3 (Niacin), B5 (Pantothenic acid), B6 (Pyridoxine), B7 (Biotin), B9 (Folic Acid), and B12 (Cobalamin)—the study only found risks associated with individual supplements of B6 and B12, and even then, that risk was exclusively in men who smoke. There was no association found in non-smokers, former smokers, men who only consumed vitamins B12 and B6 in the lower doses of a multivitamin, or in women.

This isn’t the first study to find that the lung cancer risks of vitamin B12 are unevenly distributed. An earlier study also found a subtle but present increase in lung cancer risk with high consumption of B12, based on blood serum levels of the vitamin. When the researchers broke apart the data by gender, they found that the risk was actually only present in men.

“If we had to put out a guess, sex hormones are important in the regulation of the same pathway,” says Brasky. “The way I see it, either having estrogen is good and protective, or having more testosterone is harmful. Men seem to have a higher risk.”

It’s dangerous to alter one’s behavior based on the strength of a single study. And Brasky’s study, while intriguing, is not conclusive. And even if you take the results to heart, the findings don’t really suggest you should stop taking B12. Quitting smoking would be the better course of action.

That said, unless you’re deficient—people with Crohn’s disease, celiac disease, vegans, and the elderly are especially at risk—most of us simply don’t need to take vitamin B supplements. And as this study and others suggest, the fact that something is water soluble (and not immediately toxic) doesn’t mean it can’t hurt us in some insidious way. So the supplements you take because you’d rather be safe than sorry might do more than give you very expensive pee. They might actually be making you sick.