Fruits and vegetables could save your life—but not from any one disease. 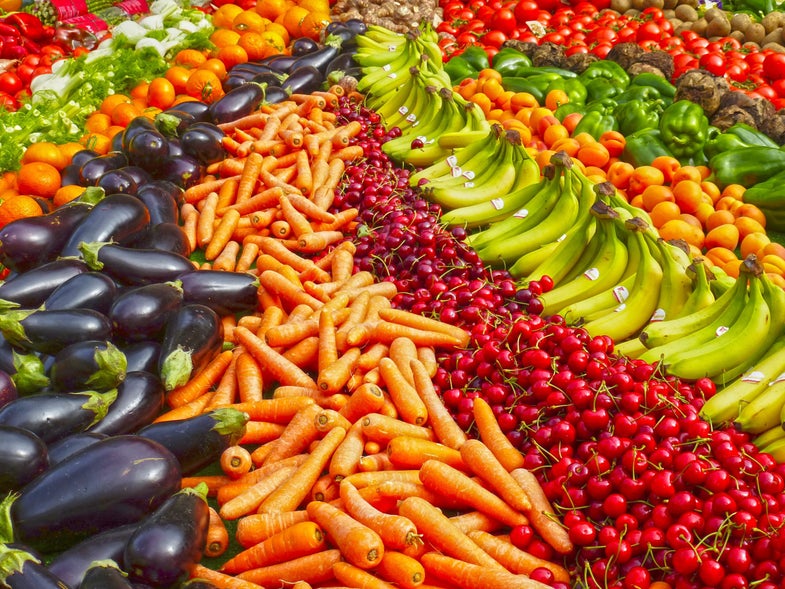 Eating plenty of fruits and veggies is probably the single most important piece of advice that most Americans ignore on a daily basis. As a country, we eat woefully little roughage, and it is undoubtedly hurting our health. But any story that claims eating more [insert fruit or veggie here] will directly prevent you from getting [insert common and specific disease] is misleading you in a major way.

Two recent studies set off a predictable deluge of diet advice. They seemed to imply that 1) eating more leafy greens could stave off brain aging, and that 2) eating tomatoes and apples could repair ex-smokers’ lungs. Both were purely associations. This is not to say that the correlation was wrong—in fact, the correlation almost certainly exists. But that’s not the same as saying that one causes the other.

It’s true that consuming more peppers or spinach or broccoli will, in general, help you live a longer, healthier life,but that principle is broad. As is most of nutrition science, really. Some studies have linked tomato products with a lower risk of prostate cancer, but eating more tomatoes won’t necessarily keep you from getting prostate cancer, nor will it stave off any other kind of cancer.

Part of the problem here is that most people think of medical studies as being largely equal. They aren’t. A strong study might involve a clinical trial that shows people who took drug X had fewer heart attacks. That study can demonstrate that drug X itself staves off heart attacks because it had two groups of people, a control and an experimental group, who were statistically similar—they were roughly of the same age range, gender distribution, etcetera etcetera. Ideally the only difference between the groups is that one got drug X and one only thought they were getting drug X.

Nutrition studies aren’t like that. There are no clinical trials where doctors prescribe five tomatoes a week to one group and placebo tomatoes to another. So we’re stuck with long-term observational studies, where researchers ask people to self-report what they eat and then track those people to see what kinds of health outcomes they have. At the end of the study, they can look back and see whether people who say they eat more fruits and veggies end up having less diabetes or heart attacks or cancer.

It’s important to note here that we’re not bashing all nutritional studies. They’re the only tools we have to figure out how diet affects our health. But we have to take each one with a big ol’ fat grain of kosher salt. Nutrition science only works when you look at large numbers of studies to draw general conclusions. Fruits and veggies do plenty of great things for your health—they just do them broadly.

Okay, so they definitely helps with cardiovascular disease, right?

Yes! This is one of the best-known and understood ways that fruits and vegetables help us out. Multiple large-scale studies (we’re talking hundreds of thousands of people) have shown that the more servings of fruits and veggies you eat, the lower your risk of having problems like a stroke or a heart attack, or even heart disease in general. This seems to hold especially true for green leafy foods, cruciferous veggies, and citruses. They can also lower your blood pressure—sometimes by as much as a medication.

This effect persists even in studies where the researchers controlled for factors like activity level, obesity, and smoking status, all of which might contribute to the outcome. People who eat lots of fruits and veggies probably also tend to be leaner people who exercise more and smoke less, which would make them less likely to have heart problems. The fact that we still see a decreased risk after controlling for these factors suggests that the roughage itself is doing something.

What’s less clear is exactly what they’re doing to promote heart health. The fiber content certainly helps, since it helps you feel full and eat less, aids your bowels in proper digestion, and can prevent insulin spikes that prompt your body to put on fat. There are also lots of nutrients in fruits and vegetables that just generally help your body run properly. Carotenoids, antioxidants, potassium, flavonoids, and many more have all at some point been linked to positive benefits, but not so much to specific mechanisms by which they would help your heart.

How about cancer? You mentioned prostate cancer.

Okay, so there is some limited data that suggest the lycopene in tomatoes might protect against prostate cancer. But that being said, studies have overall found pretty mixed results.

As for every other kind of cancer, the weight of evidence suggests that neither fruits nor vegetables have a direct impact on your cancer risk. Cancer is a disease of genetic mutations, and no matter how many antioxidants you consume, there is just a baseline mutation rate that you can’t avoid. The proteins that copy our DNA are imperfect, and unfortunately it only takes a single cell accumulating enough dangerous mutations to make it cancerous. Estimates suggest that about two thirds of carcinogenic mutations are completely random.

Some studies have suggested that certain chemicals in fruits or vegetables could actively help stave off cancer, especially antioxidants, but it’s been nearly impossible to actually forge the link. Like a lot of nutrient studies, they’ve largely found mixed results and popular interpretations rely on hand-waving to go from “stimulates anticancer enzymes” to “eating this fruit will actually prevent cancer.”

The biggest role fruits and veggies play is probably in helping you maintain a healthy weight. Obesity is a major risk factor for many types of cancers, including of the breast, colon, kidney, pancreas, and esophagus. So if eating more fiber (and eating less sugar and simple carbohydrates) helps you stay relatively trim, then by all means eat more kale.

What about my brain?

Again, some studies have linked particular chemicals to brain health benefits like “less aging” and even a decreased risk of dementia. But if you think we don’t understand much about how diet affects heart disease and cancer, just wait til you hear how little we understand about the brain.

We don’t really know how dementia or many other brain diseases develop, much less how to prevent them. We definitely don’t know how particular nutrients might directly impact the brain. There are certain general rules you can follow to decrease your risk of brain issues in general, but they are the same broad principles that govern basically every nutrition study: don’t smoke, and don’t be overweight, which also means eating a well-balanced diet and being physically active.

There is no one food you can eat to “boost brain health,” and that’s only in part because that phrase is virtually meaningless. But that being said, incorporating more colorful fruits and vegetables into your diet can—in general—help your brain stay healthy. Just like it does for your cancer and heart disease risks.

Nutrition science simply isn’t well-developed enough for us to whittle down the advice any more than that, which may sound depressing, but think of it this way: Eating well and exercising regularly help virtually every aspect of your physical well-being. You don’t have to follow complicated rules or be up-to-date on all the latest superfoods. You just have to make generally better habits. And that’s well within your reach.