The Apple Watch is evolving into a legitimate medical device 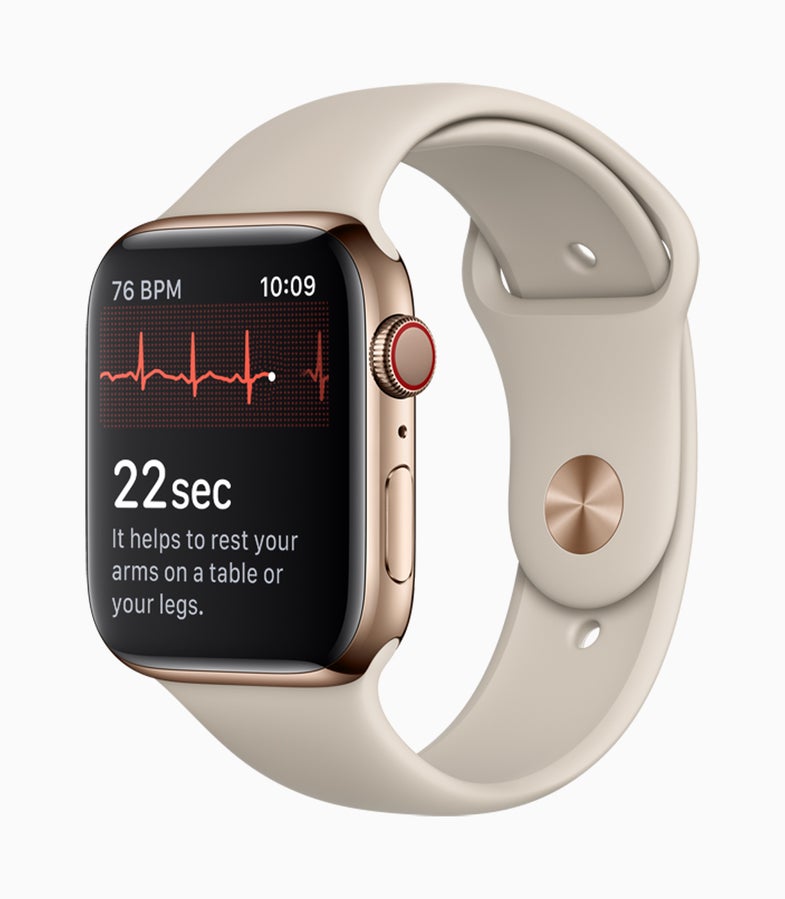 From their inception, fitness and health trackers have steadily increased the amount of physiological variables they monitor. First they simply counted your steps. Then, infrared sensors helped track your heart rate and now various other metrics including your breathing, your sleep, and for athletes, factors like VO2 max and running pace. To a large degree, that was all for the user’s own personal benefit; less about medicine and more about fitness and lifestyle use.

But this week, Apple took a big step in bringing its Apple Watch Series 4 beyond the scope of a typical fitness or wellness trackers into the sphere of clinical medical devices. The new wearable will come equipped with an electrocardiogram (ECG) monitor in addition to the typical IR sensor. Electrodes placed in the device’s sapphire crystal back and the crown on its side will conduct an ECG test akin to a 1-lead portable ECG when you open the app and touch your finger to the crown.

Despite Jeff Williams’ claim in his presentation that, “this is the first ECG product, offered over-the-counter, directly to consumers,” that’s far from the case. Varies portable ECG devices exist that you can buy yourself, including AliveCor Kardiaband, a large band-aid sized gadget that registers a medical grade ECG in about 30 seconds.

The far bigger deal is the fact that Apple is becoming the first wearable to delve deep into the medical sphere: The company gained FDA clearance to use its sensor and accompanying app to detect atrial fibrillation, or A-fib, an irregular heart rhythm that can lead to a variety of heart conditions including blood clots, stroke, and heart failure. According to the American Heart Association, about 2.7 million people have A-fib.

Again, this isn’t entirely new, AliveCor has done it before with its Kardiamobile and Kardiaband (which is actually meant to fit as a band on the Apple Watch). But integrating the technology into the Apple Watch itself—and gaining FDA approval for its use—is new, and significant. In the past, dedicated medical device companies have been the only ones to design gadgets to detect and treat medical problems, and the only ones willing to take on the FDA. But with yesterday’s new announcement, that has all changed.

“I think many health systems and medical device companies of the world have always believed that these tech companies have been too afraid to move into regulated healthcare space,” says Joel Dudley, director of the Next Generation Healthcare Institute at Mount Sinai Medical Center in New York. “But I think this proves otherwise, that Apple is more than willing to engage with the FDA. It’s one of the most striking and aggressive examples to date of tech companies starting to eat their way into healthcare.”

Other tech giants, like Google, he says are still working towards getting into the healthcare space. Just last month, Google announced Heart Points, which attempts to turn wearables into a game to get you moving (though motivation is likely a far larger obstacle we all need to overcome). It’s a program developed in conjunction with the American Heart Association, which was also involved with Apple’s ECG initiative for Watch.

Heart points, however, are simply a way for Android devices to try and interpret data gathered from its existing sensors and present it in a way that motivates the user. With Apple, though, the device contains a medical device whose ubiquitous use could have implications both for heart disease patients now—and potentially all of us, down the road.

Immediately, how doctors, especially cardiologists, plan to use the device still isn’t completely clear, but it’s geared towards hitting an unmet need.

Adriana Quinones-Garcia, a cardiologist at New York University’s Langone Health, says it can be extremely difficult to diagnose people with irregular heart rhythms. Current devices like holter monitors and implantable units, are often bulky or invasive, making people less likely to want to wear them, she says. Further, most of the currently available monitors are worn for a limited amount of time, so if the person doesn’t happen to have the heart rate episode during that time, the doctor won’t be able to accurately diagnose it.

“Having a device that the patients already use as part of their everyday life and have with them at all times where they can very quickly have a symptom and very quickly generate an EKG can be extremely helpful,” Quinones-Garcia says.

But as for the rest of us who haven’t had any cardiac symptoms, what use is a smartwatch with an ECG? “The answer is we don’t know and we would never know if Apple hadn’t done this,” says Dudley. Dudley and Quinones-Garcia say a lot actually. While otherwise healthy people can’t really learn that much from daily (or hourly for those hypochondriacs of the world) from their ECGs, the question of whether too much healthcare monitoring is really a matter of what is done with the data.

“We have no idea what normal is for anything in health because we don’t generally study large numbers of healthy people,” says Dudley. “I think what we are going to find is that health and disease are really more of a spectrum rather than these discrete buckets that we put people into.”

In the case of A-Fib, he says, there are likely early warning signs of disease that would emerge from large collections of ECG data from the healthy population. “While Apple, in order to get the FDA approval, probably had to demonstrate some degree of sensitivity and specificity and show that it is not going to give a huge number of false positives and send people to the ER.”

The next big problem Apple is going to have to figure out is who is going to read all of this data. For people with diagnosed health conditions, it can be easily configured into their continuity plan with their doctors, where they upload their data to an electronic health record system (which, again, AliveCor already does with their Kardia products) and their doctor gets an alert when something’s not right rhythm-wise.

But the rest of us Apple-watch wearing, ECG-monitoring folks, it’s much blurrier. Currently, Apple does not have access to a user’s health data, unless they willingly sign up for an Apple-affiliated study. And it’s unlikely they will attempt to gain access in the future. (Not for altruistic reasons at all, says Dudley. Unlike Google, who makes its yearly cash on data, Apple’s high priced products bring in all their needed revenue, and then some.) So in order to access the data, they’d need to ask you first.

Nevertheless, with large amounts of data, there’s much to be gained.

“We are in this emerging era of precision medicine,” says Dudley. “Something like this Apple Watch on the ECG is something that is directly in line with where we want to go with precision medicine which is how do we use quantitative information to really redefine what is health and what is disease.”